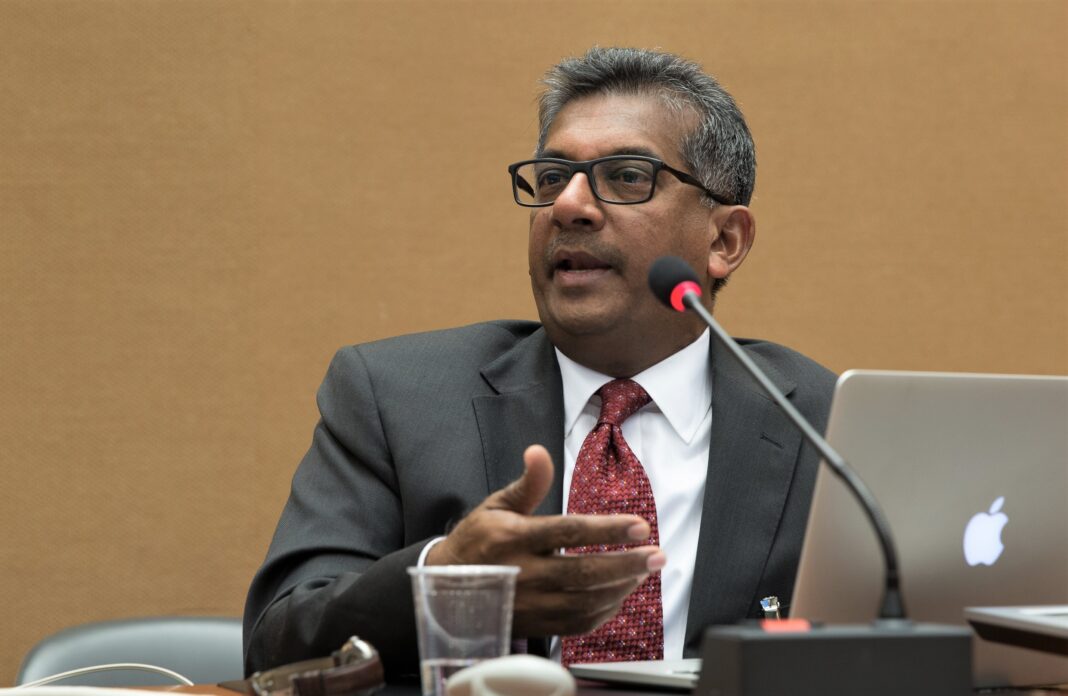 Even during the hight of the pandemic, on May 15, 2020, while the country was under lockdown, a naval contingent was established to protect the Buddhist Muhudu Maha Vihara (temple) and its land in the south-eastern coastal town of Pottuvil which is inhabited by Tamils and Muslims. This was widely viewed as a move to evict the Tamils and Muslims from that area.

A recent trend is being witnessed where Hindu devotees are being prevented from worshiping and engaging in religious practices in ancient Hindu temples. In the eastern town Kanniya, when renovation was being carried out, a Buddhist Dagaba was placed where a Hindu Idol stood on the basis that the place was originally Buddhist. In north Nedukkunaari, a Hindu priest and two others were arrested when they went to perform an annual ritual claiming they were trying to damage archaeological monuments. In Kurunthoor mount in north, a Hindu Trident was forcibly removed and replaced by a Buddha statue. These are attempts to oust Hindus from their places of worship.

Since 2015, 513 incidents of violence against Christians have been reported. Of that, 184 incidents were incidents of threats and intimidation while 276 incidents involved state officials as perpetrators, either explicitly or implicitly. In 2020, multiple pastors were questioned about their religious practices, the registration status of their churches, and the personal details of their congregants. This has been coupled with renewed demands for the banning of religious conversions. Despite there being no law there is Bureaucratic restriction on new constructions of places of worship of minority religions.

Since the end of the war in 2009, Muslims have increasingly become the target of hatred, state-sponsored injustice, and violence. Violent rhetoric was unleashed against Halal certification, the attire of Muslim women, Muslim houses, businesses, properties, places of worship and Muslim religious education. There have been hundreds of violent attacks against Muslims. At least 64 attacks on Muslims were recorded during the period between November 2015 and June 2016. A spate of attacks on Muslim-owned businesses was recorded in April and May 2017. The worst anti-Muslim violence in Sri Lanka’s post-colonial history took place in towns in the central Kandy district in 2018. At least 6 Muslims have been killed in these recent (years’) anti-Muslims mob attacks and to date, no one has been held accountable.

Hard as it is to believe, the International Covenant on Civil and Political Rights is being abused and weaponised to arrest Muslims arbitrarily and incarcerate them for exercising their right of freedom of expression and dissent. In contrast, hatemongering extremist monks, mobs and media enjoy impunity.

Even the pandemic was used to spread hate against the Muslims. Muslims were accused of being the introducers and carriers of the virus. Powerful media houses, aligned to the government, promoted stories that painted the Muslims as unpatriotic and undisciplined. Incendiary monks publicly singled out Muslims for harsh, derogatory and inflammatory attacks. Against this backdrop, and in furtherance of the hatred against religious minorities, the government derogated from the constitutionally protected fundamental right to bury their dead who had fallen victim to COVID-19.

As of today, a conservative estimate is that more than 250 Muslims suspected of dying from COVID-19 have been forcibly cremated against the wishes of the families and without any scientific reason to do so.

After the Interactive Dialogue on Sri Lanka here at the Council on 24 February, the Sri Lankan government lifted the ban on the burial of COVID-19 victims. Possibly this was done in an effort to secure the support of Muslim member states. But, even after several days, we are yet to witness a single burial taking place. The government has not even issued guidelines for safe burials. Latest I hear today is that the government is looking for an uninhabited island to bury the COVID dead!

The most recent twist is that the Justice Minister is reported to have recommended, that, for security reasons, the wearing of Niqab (face veil) in public places and public gatherings should be banned. In a country where the wearing of face masks is compulsory, this attempt to ban the face veil defies all logic. What reason can there be other than anti-Muslim extremism and hatred? Is bartering of rights the way to go to assuage extremists and Islamophobes?

Therefore, faced with this litany of threats and abuses it is imperative that the Human Rights Council take every possible step to ensure the equal protection of Sri Lanka’s ethnic and religious minorities and their human rights. This must be done at this session through a resolution on accountability, access to truth and justice, and the gathering of evidence. Sri Lanka must remain on the Council’s agenda.

The statement made by M. Ameer Faaizm, Attorney at Law at the side event held on 1 March during the HTC46 under the theme: “Sri Lanka: time for action to halt rollbacks on human rights and ensure accountability”