How Sri Lanka Commissions Away The Disappeared 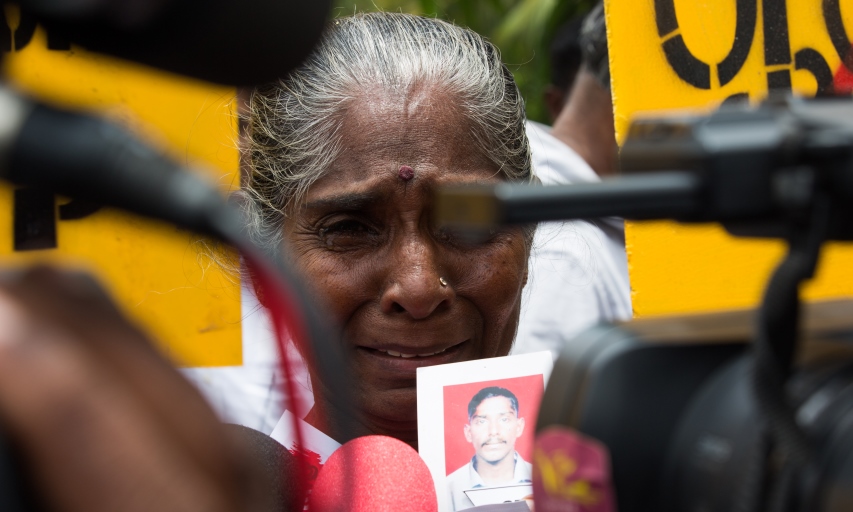 But for women like 55-year old Yogarasa Kanaharanjini, who is currently leading a 200-strong protest by relatives of the disappeared in the war-scarred northern town of Kilinochchi, the idea of the OMP is neither impressive nor promising.“Many families have waited for over eight years already,” she told Roar. “We have written letters to politicians, complained to the Human Rights Commission, and spoken at hearings for the Paranagama Commission, and the Consultation Task Force for Reconciliation ‒ and achieved nothing. How will the OMP be any different?” she asks.

Indeed, the OMP is the latest in a long line of domestic mechanisms meant to find answers for the families of those forcibly disappeared. Since the early ’90s, at least ten Presidential Commissions of Inquiry have been launched into the matter of enforced disappearances.

Not all the final reports of these commissions were made publicly available, but the few that did, revealed shocking findings that incriminate the state and the military. Their recommendations, too, echo calls from civil society that continue today.

Former UNP President, Ranasinghe Premadasa, was the first to try and tackle “Involuntary Removals of Persons” through a Commission of Inquiry in 1991. The mandate of this Commission was never extended; however, new warrants were issued in 1992 and 1993.

After Premadasa’s assassination by the LTTE in 1993, his temporary successor, Prime Minister D. J. Wijetunge, revoked the warrants of the three previous Commissions of Inquiry and initiated yet another Commission. The end result was four legally distinct Commissions, and no publicly available reports to show for it.

However, a publication by Law and Society Trust titled Sri Lanka State of Human Rights 1994, claims that these commissions “had submitted reports on at least 142 cases of disappearance to successive Presidents between January 1991 and the end of 1994. In some cases at least, the reports are believed to contain evidence implicating individual officers in perpetrating disappearances.”

After the SLFP swept into power in 1994, President Chandrika Bandaranaike Kumaratunga set about establishing three ‘zonal’ Commissions of Inquiry into Involuntary Removals and Disappearances. Each was mandated to look into disappearances starting from 1988, within their specific geographical jurisdictions.

Originally given a four-month deadline, the commissions had their mandate extended multiple times until their final reports were submitted in 1997. Their work however, was still left unfinished and a fourth “All-Island” Commission of Inquiry was set up by Kumaratunga in 1998 to follow up unfinished cases. Its final report was published in 2001.

All of the final reports from the Kumaratunga-appointed commissions are now accessible at the National Library of Sri Lanka. Many of their recommendations are chillingly reminiscent of calls from civil society activists today.

A staggering 90% of enforced disappearances were ascribed to the Sri Lankan military and police, with the remaining 10% being ascribed to paramilitary groups like the LTTE, according to the Final Report of the Commission of Inquiry into the Involuntary Removal or Disappearance of Persons in the Northern and Eastern Provinces.

Working under conditions of active warfare, the commission noted difficulties when attempting to obtain information from the military and police. “The Army arrested people in large numbers. The Army only can answer what happened to the corpus of those arrested,” the report said.

Perhaps most startling is that the report even went as far as to name several Police officers and military personnel, regarding whom the report said that “There is enough evidence in our files for initiating prosecution.”

“There is enough and more evidence to indicate that most of the victims [of enforced disappearances] were organisers etc. of the SLFP… branded as JVPers and their names given to the Police and Armed Forces for elimination,” reads the the Final Report of the Commission of Inquiry into the Involuntary Removal or Disappearance of Persons in the Central, North Western, North Central, and Uva Provinces.

The report goes on to implicate the UNP government of the time, claiming that, “there are a few Grama Niladharis who helped the Armed Forces to illegally remove persons,” and that, “they should be severely dealt with.”

A recommendation by the report that is salient even today is that the “Government should undertake a general overhaul of its emergency legislation [the Prevention of Terrorism Act]… to ensure that the present legislation conforms to accepted international standards regarding due process and treatment of process.”

The Final Report of the Commission of Inquiry into the Involuntary Removal or Disappearance of Persons in the Western, Southern and Sabaragamuwa Provinces investigated abductions linked to both the JVP insurrection in the South and the ethnic conflict in Colombo.

The report goes on to note that criminal investigations into enforced disappearances were often distorted, “to conceal more than to reveal” in the few instances where “authorities could not refrain from semblance of an investigation.”

The Final Report of the Commission of Inquiry into the Involuntary Removal or Disappearance of Persons (All-Island) collated much of the same data as the three zonal commissions that preceded it.

Many of the recommendations were echoed in greater detail. Indeed, just like its predecessors, the report emphasises that, “The bulk of its recommendations for confronting Sri Lanka’s recent legacy of unaccountable power and violence concern legal reforms to control the excesses of state power.”

In total, the report found 21,215 verified cases of enforced disappearances. Of the many perpetrators linked to these cases, less than 500 have been indicted.

The reports commissioned by President Rajapaksa were far less critical than those of his predecessors’. Image courtesy AFP

Towards the end of the war in 2006, President Mahinda Rajapaksa set up the Presidential Commission of Inquiry Regarding the Incidents of Abductions, Disappearances and Attacks on Civilians Resulting in Deaths Throughout the Island ‒ the final report of which was more forgiving than its predecessors.

“The Police must be appraised of and taught Penal Code, the Police Ordinance, the Emergency Regulations, the Constitutional safeguards of citizens, and at the same time, how to tackle a crime… Lapses appear to have been due to ignorance, rather than intentional. They were indifferent and sleepy,” reads one of the reports’ assessments.

In 2013, four years after the end of the war, President Rajapaksa set up the Presidential Commission to Investigate into Complaints Regarding Missing Persons. This was the last commission of inquiry into the matter and has become known to the public as the Paranagama Commission. A final report was never made public.

A bizarre outcome of successive Commissions of Inquiry is that the Sri Lankan state has managed the odd feat of perpetrating crimes, commissioning inquiries into said crimes, and subsequently publishing reports that incriminate itself. Yet, accountability has been all but illusory.

Thyagi Ruwanpathirana, a former researcher for Colombo-based Centre for Policy Alternatives and the Consultation Task Force on Reconciliation, explains that Commissions of Inquiry “are not meant to be initiatives that seek out criminal liability.” Instead, the Commissions are “set up to receive information or evidence that do not always live up to the standard of evidence admissible in a court of law.”

“It is therefore a misconception to assume that findings of Commissions of Inquiry will lead to indictments and prosecutions… Commissions do not have the power to initiate legal proceedings themselves, therefore the government, upon receiving Commission reports, must direct the relevant actors to take necessary action in line with the findings,” she states.

Protesting for over 26 days now, these relatives of the disappeared in Kilinochchi express little faith in the proposed OMP. Image courtesy writer.

Unlike the Commissions that came before it, the Office of Missing Persons has considerably more power ‒ if it is ever fully established by the President. Ruwanpathirana suggests that the OMP has the unique opportunity to “build on existing information that has been made available, without reinventing the wheel.”

But winning the faith and participation of victim families will not be easy. From hunger strikes in Vavuniya to the sit-ins in Kilinochchi, families of those disappeared during the last stages of the war are losing patience. Hundreds of thousands more across the island have lost hope for their family members reported missing as far back as the ’80s and ’90s.

Says Ruwanpathirana, “The OMP is essentially that next step ‒ to actually probe into, investigate and deliver answers. Therefore, ideally, at least a few cases where tracing inquiries are successfully carried out to a point of conclusion will be the best measure of the OMP’s credibility. However, this is not as easy as it seems. It could take months to carry out conclusive investigations and perhaps even years to recover remains ‒ even where this is possible.”

“The lack of faith in state initiatives to find answers is precisely why participation of affected families in both the OMP’s membership and staff is crucial… This is all to do with seeking the truth. Some affected families seek more than just truth and one must keep in mind that the OMP does not guarantee justice. Its primary focus is truth and clarifying the fate of the disappeared.”

Editor’s note: The full text of publicly released commission reports can be found at the National Library of Sri Lanka. Kishali Pinto-Jayawardene’s book, A Legacy to Remember; Sri Lanka’s Commissions of Inquiry, contains summaries of some of these reports.