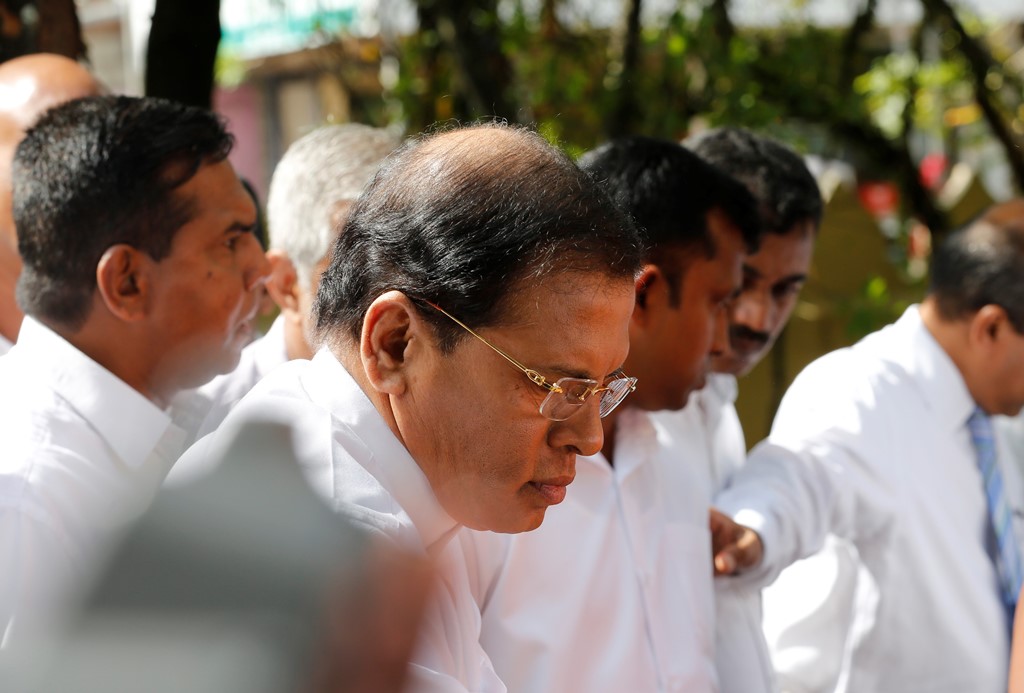 (In an accompanying note, President Sirisena has said that the Office of National Unity and Reconciliation (ONUR) had drafted the National Policy  on reconciliation;  Image (c) s.deshapriya)

PREAMBLE
Concerned by the suffering, damage and detriment caused to the lives, dignity and security of all citizens of Sri Lanka due to the prolonged period of social and political tension, including the protracted armed conflict that spanned three decades;
Acknowledging that since the conflict ended there remains a breakdown of trust, intolerance and prejudice between and within communities;

Mindful of the fact that at the heart of the problem is the lack of an acceptable arrangement of shared political authority satisfactory to all communities in the country and that this has manifested itself in discontent and violence at different periods in the history of the country;

Knowing that a lack of equal access to opportunities ranging from, but not limited to, education, livelihood, employment and justice remains the major cause of discontent in the country;

Aspiring to re-establish the good relationship between the State and the citizenry through a range of measures including but not limited to, through strengthening civil administration and, return of property and lands to rightful owners; promoting media freedom, generating livelihood opportunities, and protecting the right and interest of missing and disappeared persons and their relatives;

Determined to respect, protect and fulfil the human rights of all citizens equally, including civil and political rights on the one hand and economic, social and cultural rights on the other, while continuing to combat impunity and uphold the rule of law;
Recognising that it is essential to build a shared Sri Lankan identity that embraces diversity and multiculturalism;
Affirming that a process of healing has to take place in a holistic manner both individually for victims of conflict and violence, and collectively at the level of communities and societies that have suffered;

Considering the importance of developing a national narrative of the past that resonates with all communities in Sri Lanka;
Committed to creating an inclusive society, a sense of belonging, and an environment conducive to the full realisation of the potential of every Sri Lankan citizen;

Calling for a whole-of-government effort and a multi-stakeholder process that combines a two-pronged approach, namely preventive through ensuring non-recurrence of past events, and through futuristic initiatives for reconciliation.
This National Policy on Reconciliation is founded on the imperatives of Democracy, Good Governance, Human Rights, Rule of Law and National Unity.

Policy Principles
“A set of actionable principles and long-term goals that will form the basis for making rules and guidelines, and to provide overall direction to planning and development for national reconciliation.

Equality
“Acknowledge the principle of power-sharing as the means of reaching a political settlement, which would address the grievances and aspirations of all communities as a necessary constituent for reconciliation.

“Ensure gender equality in all national initiatives; develop protection mechanisms for vulnerable women around the country; redress and provide reparations to women who have endured violations; and promote agency of women as partners in decision-making and as agents of change in reconciliation process and activities.

“Ensure that all citizens have equal access to their substantive freedoms and promote unequivocal non-discrimination, transparency, accountability and fairness in all legal, social, political and administrative mechanism and proceedings at national, provincial and local level.

HUMAN RIGHTS
“The State shall make every endeavour to ensure that the full range of civil and political rights are equally upheld for all citizens and groups in the country in a non-discriminatory manner. The State should provide a mechanism to enforce civil and political rights and an enabling system for its implementation, which includes the rule of law, administrative justice, educational measures to promote a rights culture and democratic structures with checks and balances. The judiciary should play an important role in ensuring the implementation of these rights.

INCLUSIVITY AND DIVERSITY
Proactively cultivate a sense of belonging, responsibility and solidarity towards strengthening a shared Sri Lankan identity and values enriched by the nation’s diverse ethnic and cultural heritage, and to explore the notion of active citizenship in Sri Lanka and what it means to be a Sri Lankan.

“Ensure the right of every citizen to use and demand services in Sinhala and Tamil, the National and Official languages of Sri Lanka as enshrined in the Constitution and collectively work towards achieving trilingual competencies in Sinhala, Tamil and English languages.

“The State shall endeavour to create an inclusive society by setting up mechanisms to actively encourage the participation of formerly marginalised groups in decision making as well as their access to opportunities and services.

“Ensure representation within the public service and judicial system that reflects the diversity of the Sri Lankan population.
“Design specific mechanisms and programmes that within State and public sector institutions to mainstream policies and practices that uphold the principles of multiculturalism.

“Address the needs, empower, and engage with vulnerable groups affected by the conflict, including but not limited to, female heads of households, war widows, survivors of sexual and gender-based violence, children and youth, internally displaced communities, families of missing and disappeared, ex combatants, differently-abled, resettled communities.

JUSTICE AND RULE OF LAW
Strengthen, and reform where necessary, the judicial system so as to adequately deliver, and provide access to, swift and expeditious justice.

“Actively work towards ensuring equal and informed access to justice, maintenance of law and order and the equitable, impartial, competent, and swift dispensation of justice by way of an impartial and competent judiciary.

“Make every endeavour to provide reparations to victims who have been identified to have suffered loss as a result of the conflict and to ensure the protection of victims and witnesses during and after their quest for justice and redress.

“To amend and repeal laws which are discriminatory and are not in compliance with normative standards; and to introduce laws that are necessary to foster reconciliation.

OWNERSHIP
“Proactively examine the obstacles faced by respective sectors, including but not limited to, female-heads of households, war widows, children & youth, internally displaced communities, families of the missing and disappeared, ex-combatants, differently-abled, resettled communities, and Sri Lankans living overseas and persons of Sri Lankan origin living overseas belonging to all communities, in participating and exercising their rights and define and implement actions to address these obstacles.

CLEAR AND CONSISTENT COMMUNICATION
“Design and implement reconciliation interventions in consultation and with the participation of relevant stakeholders, and listening to respective stakeholders including civil society, direct and indirect victims of conflict and violence, and other affected groups; while the State should proactively release information on progress towards reconciliation in the country and such information must be communicated with responsibility and remain accessible, open and transparent to citizens.

“The State should make a concerted effort to engage the general public, through mobilising traditional and non-traditional media, in order to bring about positive attitudinal change that will in turn facilitate the readiness and preparedness of citizens to receive and accept solutions to the root-causes of conflict. Government and non-government actors must go beyond using media as a mere tool for communication; rather they must proactively leverage the media as a strategically powerful tool to promote reconciliation through carefully designed interventions.”