“Had King Vijayabahu failed to become the king at the right time, our country would have been called the ‘Manmadi Chola Mandalay’ – President Rajapaksha 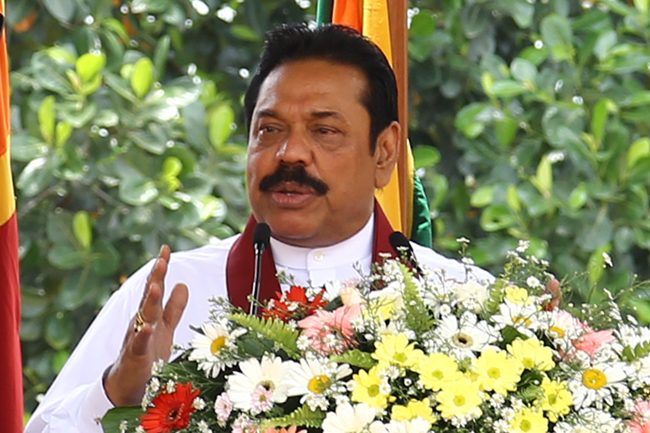 Sri Lanka Army’s Vijayabahu Infantry Regiment (VIR), one of the most renowned and recognized regiments, comprised of veteran infantrymen of the best quality and standards, received another notable feather in its cap when the Commander-in-Chief of the Armed Forces, HE the President Mahinda Rajapaksa, for the first time after culmination of Wanni battles, conferred most admired President’s Colours and Regimental Colours on it during a ceremony at Kurunegala, Boyagane, VIR Regimental Headquarters Friday (22) morning.
……….
……….
Religious observances afterwards invoked blessings on the award of Colours as Colonel of the Regiment Major General R.V. Samarathunga, representing all ranks lined up before the Commander-in-Chief to receive symbolic gestures of honour after citations over VIR bravery were announced. Amidst military formalities and traditions, President’s Colours and Regimental Colours were then awarded by the Chief Guest.

President Rajapaksa, adding a few words to the occasion a few minutes later traced the country’s history to the times of the King Vijayabahu, formerly known as the Prince Keerthi during the 10th century. “Had he failed to become the king at the right time, our country would have been called the ‘Manmadi Chola Mandalay’ by Chola invaders who were ruling the southern part of the country at that period of our history,” the President said.

“Sri Lanka used to experience many such invasions during various periods of our history. Having faced all those challenges for thousands of years, we remained a sovereign nation until the year 1815. It was none other than the shameless machination of the imperialists which subdued our nation in 1815, not that we were defeated in war with our invaders. It is almost the same what is happening today. Identical to the way they had tried to identify this country as the ‘Manmadi Chola Mandalam’ during the times of the King Vijayabahu, a section of this country before 2009, was identified as an Eelam region. The ceasefire agreement even had acknowledged some recognition to that effect. How would it be the situation in this country as of today unless we managed to annul the international community-engineered ceasefire agreement in 2008? ” the President urged those present there to think of it.

“Had those plans worked as they wished, this country would have been by now split into two, using the ceasefire agreement as an international guaranty. We have now reduced the notion of Eelam to a dream, and now they want to take revenge from us for doing so. Around the time when we decided to launch the humanitarian operations against terrorists, we were well aware of the consequences that would follow in the event of our victory in those operations and its possible impact. If interpreted into your own usage, a ‘surprise attack’ from all fronts against the enemy would be important to all sides. After the victory, TV channels, like ‘Channel-4’ are trying to launch this ‘surprise attack’ with their false accusations, ulterior motives and allegations,” the President noted.

“Media had unrestricted freedom to cover the northern humanitarian operations unlike any other country would do. One such media man has now been bought for dollars by vested interests and we know what he has been doing overseas. We knew in advance such atrocities by Diaspora and anti-Sri Lanka elements would be a reality some day. This attack would not surprise us at all. These attacks would not subdue us, either, nor would they defeat or intimidate us in any way,” the President asserted.

“Those who opposed humanitarian operations and tried to stall its onward march allege that our improper management of foreign relations brought about these current developments in Geneva. How come instances such as previous aerial drop of dhal, arrival of foreign troops and signing of ceasefires with countries, like Norway to appease Tigers, happened then? Was it then due to ‘mismanagement’ of our previous foreign policy?,” the President queried.

“I must specify that when humanitarian operations were on, we had to put up with more worse foreign influences. These foreign influences are happening not due to lack of management, but these are the dire needs of several imperialist countries and the Diaspora. As the Vijayabahu Infantry Regiment’s motto says any weight is bearable to one who is skilled in vocation and has professional knack. Therefore, this motto is more important to overcome today’s challenges. Our tri-service War Heroes with their humane qualities are a blessing to the country. Your humanity, discipline and patience, is well used for the benefit of people with multi-ethnic backgrounds in redeveloping the country. We have been able to rehabilitate tens of thousands of former LTTE combatants. Those entering north and east will witness two wonders; rescue of north and east from terrorism and the difference the troops have made through post-conflict development roles,” President Rajapaksa pointed out.

Paying a special tribute to the VIR, the President recalled the memories of 135 VIR officers and 3050 VIR other ranks who had made the supreme sacrifice for defence of the country and left immortal memories with us. “Your sacrifices were not in vain. Your regiment with 15 regular battalions and 8 volunteer battalions contributed tirelessly towards operations, such as Vadamarachchi, Riviresa, Sathjaya, Jayasikuru, etc which were second to none in nature. Let me wish good luck to the VIR which received Colours today,” President Rajapaksa concluded.

VIR with the objective of enhancing the strength of the Army was raised exactly 23 years ago on 22 March 1990 at Sinhavilluwatta, Puttalam after the Regimental Headquarters was relocated at Boyagane on 26th September 1988.

All battalions in the VIR, commencing from the landmark Mavil Aru episode up until the culmination of the Wanni humanitarian operations and the recovery of the terrorist leader’s corpse, played decisive and undisputed roles with their expertise in volatile combat and unchallenged infantry prowess.

To its credit, the VIR has so far produced a large group of veterans, including late Major General Vijaya Wimalaratne who was the first VIR Colonel of the Regiment. He afterwards joined the Gajaba Regiment.