‘Gunning’ for Sumanthiran: Is history repeating itself? 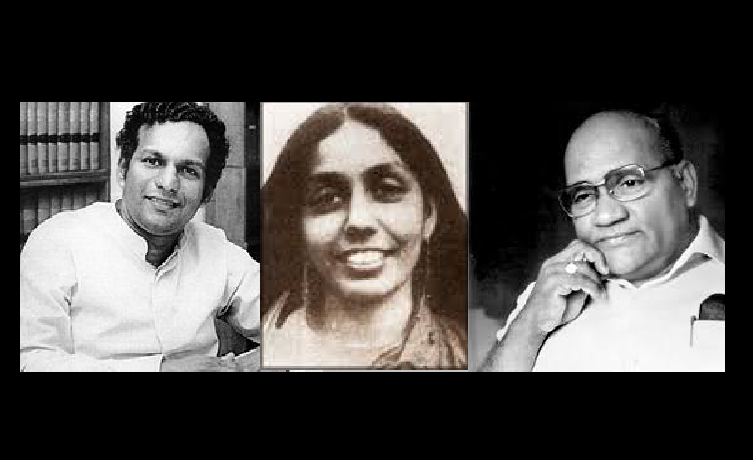 Image: Neelan, Rajini and Amirthalingam all killed by the LTTE for being moderate.

Plans to assassinate Tamil National Alliance (TNA) Parliamentarian Mathiaparanam Abraham Sumanthiran, who is a confidant of TNA Leader and Leader of the Opposition R. Sampanthan, have been unearthed by the Terrorism Investigation Division (TID) with the arrest of five suspects.

The preliminary investigation carried out by the TID has brought to light that the assassination plot was hatched with the involvement of certain pro-LTTE activists abroad.

In a vacuum state, where only a handful of intellectually sound politicians remain in the present Tamil political scene following the assassinations of several refined politicians, Sumanthiran’s entry into Tamil political scene was much appreciated with his prominent role played in bringing out the UNHRC resolutions in Geneva against the Lankan Government on alleged war crimes, from 2012 onwards.

Despite being closely in touch with the LTTE, under the banner of the Tamil National Alliance, almost all the Tamil politicians lived in fear for their lives prior to the end of civil war in 2009.

The manner TNA Parliamentarians Joseph Pararajasingam and N. Raviraj were assassinated had clearly indicated that the Tamil politicians who had been courageous in expressing their views were the ‘sitting ducks’ for anybody who were opposed to their stances.

When the civil war was in progress, under the guise of the LTTE, killings, abductions and extortions were carried out extensively and several incidents still remain a mystery such as the assassinations of TNA Parliamentarian Raviraj and the UNP Parliamentarian T. Maheswaran.

The reports have emerged in recent days on the plot to kill TNA Parliamentarian M.A. Sumanthiran. However, TNA Leader R. Sampanthan and M.A. Sumanthiran were targeted at the end of Parliamentary polls in 2015 by certain members of constituent parties in the TNA as well as the members of the Tamil National People’s Front led by Gajendrakumar Ponnambalam.

There were even instances when the effigies of Sampanthan and Sumanthiran were set on fire in Jaffna and abroad, over the issues of Tamil political prisoners and the disappeared persons.

R. Sampanthan and M.A. Sumanthiran led even to the formation of the Tamil People’s Council (TPC) with the inclusion of Northern Province Chief Minister C.V. Wigneswaran.

The rift in the TNA came to the surface when Sumanthiran and Mavai Senathiraja were on their foreign tours last year. One of the meetings attended by Sumanthiran in Australia last year was interrupted by a group of people who didn’t allow him to speak and they had even threatened the organizers of the event.

Another meeting which was held with the participation of TNA Parliamentarian Mavai S. Senathiraja was also interrupted last year in Paris when a group of youngsters shouting anti-TNA slogans had even sprayed chemical substances to disrupt the meeting.

The preliminary investigation into the alleged plot to assassinate Sumanthiran, which revealed the attempt was hatched abroad, makes it clear that certain diaspora outfits are all out to create a miserable condition in the North and East for their own survival.

Late Mayor Alfred Duraiyappah was the first to be branded openly by the Tamil moderates and it was the hard hitting propaganda carried out against Duraiyappah that led to his assassination with anarchy gradually beginning to reign in the North and East.

The first shot fired by LTTE Leader V. Prabhakaran at Alfred Duraiyappah, when he was coming out of Varatharajaperumal temple in Ponnalai in 1976, led to three decades of deaths and destruction with the annihilation of those who first branded Duraiyappah as traitor, criticizing his non- confrontational stance in politics.

So, as history repeats itself, the moderate approach of the TNA leadership has also now been criticized by the elements based both locally as well as abroad, which looks forward to thriving in a messy situation.

The Tamil National Alliance while focusing on the issue of alleged assassination attempt on Sumanthiran should also take into consideration the political aspects with regard to the Sumanthiran issue in the South.

Concerns expressed by former President Rajapaksa and the Joint Opposition members with regard to Sumanthiran issue appear to be like ‘a wolf crying on seeing the goat getting wet in rain’.

The political elements opposed to the National Unity Government could utilize the Sumanthiran issue for their political gain like the manner the political rivals of the TNA in the North attempting to create a problematic situation for their survival.

The investigation carried out so far on the alleged attempt on Sumanthiran’s life with the arrest of five suspects has revealed that the assassination was planned meticulously to hit the target by detonating a claymore mine.

Since demining is still being carried out in several areas in the North, the assassins would have even planned to create an impression that the target was hit accidently by a stray mine which would have been either buried or placed on an elevation during the turbulent period.

As the UNHRC session in Geneva is expected to take up on the developments made with regard to the resolution co-sponsored by Sri Lanka in October 2015, the issue of alleged attempt on Sumanthiran’s life highlights the rugged nature of the Lankan political scene which continues to be in doldrums.