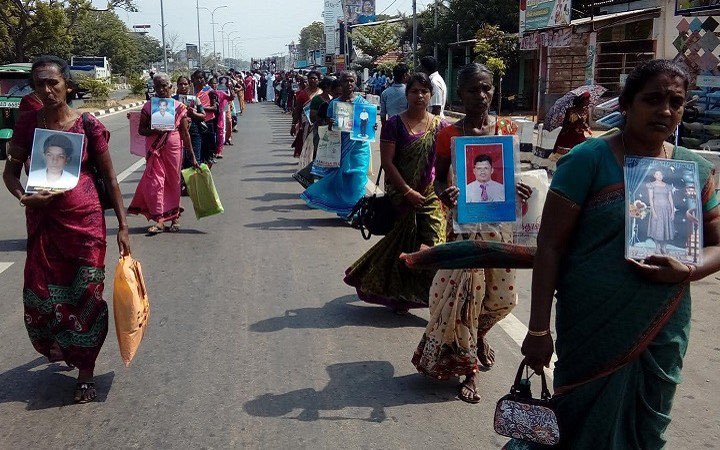 You see a shirt. The price is right: you buy it. “Made in Sri Lanka,” it says.

In 2010, the EU withdrew GSP+ status for Sri Lanka due to its bleak human rights landscape. The Sri Lankan armed forces had just defeated the Tamil Tigers, bringing an end to a 26-year civil war. U.N. experts estimated that 40,000 or more died in the final months alone. The government that won the war held onto power tightly, amidst international alarm at widespread human rights violations against journalists, civil society groups, war-affected Tamils, and religious minorities. The EU told Sri Lanka that to maintain preferential GSP+, it would have to comply with the 27 international conventions covered by the GSP+ scheme, including the International Covenant on Civil and Political Rights (ICCPR) and the Convention Against Torture (CAT). It told Sri Lanka that several sections of the Prevention of Terrorism Act (PTA), which facilitated the country’s thousands of enforced disappearances, were incompatible with the ICCPR and needed to be repealed. When the previous government doubled down on its intransigence instead of complying, the EU withdrew Sri Lanka’s GSP+ status.

In 2015, a new Sri Lankan government took over. It reapplied for GSP+ membership and co-sponsored U.N. Human Rights Council resolution 30/1 to commit to creating four transitional justice mechanisms to comprehensively deal with the past and prevent future violations. Among other commitments, the government promised the EU and the Human Rights Council that it would repeal the PTA and enact new counter-terrorism legislation.

Despite promises, there has been little action. The U.N. High Commissioner for Human Rights recently described Sri Lanka’s transitional justice measures since 2015 as “worryingly slow” and “inadequate to ensure real progress,” with government officials giving “unclear and often contradictory messages.” Of the four promised transitional justice mechanisms, only the Office of Missing Persons has legislation in place, but it remains inoperative and moves are underway to eliminate a core provision allowing foreign technical assistance. Officials have dismissed the report of public consultations task force the government itself set up, despite over 7,300 participants from all ethnic communities weighing in on the best way forward. Notably the PTA has yet to be repealed. The government claims it will be replaced with a new Counter Terrorism Act (CTA), but that legislation is being developed in secret without any consultation with the Sri Lankan public, or even its National Human Rights Commission. On 24th April Cabinet of ministers have apparently hastily endorsed the draft CTA just to placate EU members and secure GSP+. The draft CTA reportedly contains an overboard definition of terrorism-related offences, excessive powers of detention by police, and restricted legal access during the initial stages of detention – all falling well below acceptable international standards and the EU’s expectations for reinstating GSP+. Besides this draft that was approved on 24th April is substantially worse than a draft that had been presented to cabinet previously and it reintroduces offences relating to gathering confidential information, and makes speech that causes communal disharmony an offence. Meanwhile, the government is dragging its feet on constitutional reforms, causing moderate Tamil politicians to lose support against those hold hardline position and oppose engaging with the government. War-affected women are conducting street protests and hunger strikes to demand answers on disappearances and release of lands held by the military.

Hence, despite promises made, too little has changed in Sri Lanka’s human rights landscape since 2010. Nevertheless, on 11 January, the European Commission proposed granting Sri Lanka GSP+ membership. On 18 January, the Commission commended the Sri Lankan government for “committing to address historic and long-standing problems that have caused conflict and negatively affected the lives and living standards of all Sri Lankans.”

The war-affected community in Sri Lanka has voiced concerns over reinstating GSP+. When the root causes for GSP+ revocation have not been addressed, it seems counterproductive to reward the current government for mere promises made. Nevertheless, realistically speaking, GSP+ is now a virtual certainty. A majority of European Parliament would have to oppose the measure, an outcome that seems all but impossible, particularly given the decision to grant GSP+ status to countries with poor human rights records like Pakistan.

Accordingly, my colleagues and I must now reluctantly shift our focus to getting the most out of GSP+. The European Commission stated that, “as is the case for all GSP+ countries, the removal of customs duties for Sri Lanka would be accompanied with rigorous monitoring of the country’s progress in the area of sustainable development, human rights, and good governance.” If GSP+ is to return to Sri Lanka, the question becomes how to design a rigorous monitoring system to help Sri Lanka deliver on its human rights commitments, including repeal of the PTA, compliance with the ICCPR and CAT, and full implementation of U.N. Human Rights Council resolution 30/1.

Under the GSP Regulation, GSP+ beneficiaries must ratify and implement 27 international conventions and comply with reporting and monitoring requirements under each of those conventions. Beneficiary countries must also comply with the European Commission’s monitoring process, known as the GSP+ “scorecard.” When a country joins GSP+, the Commission lists its shortcomings under the 27 conventions and tracks annual progress in those areas. As part of its monitoring process, the Commission engages with a “wide range of stakeholders”—“not just the central government, but local or regional authorities, civil society (e.g., social partners, non-governmental organisations), business associations, and local offices of international organisations.” By reaching out to “local stakeholders, particularly during GSP+ monitoring visits” the Commission’s monitoring system helps local actors “play a constructive role in assisting local, regional, and central authorities to meet their commitments under the conventions.”

Ultimately, if the goal of GSP+ is to promote sustainable development, human rights, and good governance, the European Commission must undertake rigorous monitoring with local stakeholders to ensure that Sri Lanka stays on the right track.

It must realize that transitional justice and full implementation of the ICCPR, CAT, CERD, CEDAW and other human rights treaties covered by the GSP+ scheme go hand-in-hand. Human rights conventions recognize that victims have a right to remedy; Sri Lanka must likewise deliver on its promises to provide its many victims with truth, justice, guaranteed non-recurrence and reparations.

This brings me back to where I started. That shirt—“Made in Sri Lanka”—what’s the true cost in terms of human rights? How can the EU make sure it sees the benefit of the bargain if it restores GSP+ status to Sri Lanka? The last two years should make the EU wary of mere promises from government officials. Unless the EU demands an effective monitoring system that engages with civil society and war-affected communities, there is little reason to believe that Sri Lanka will deliver on its human rights commitments if it is awarded GSP+.