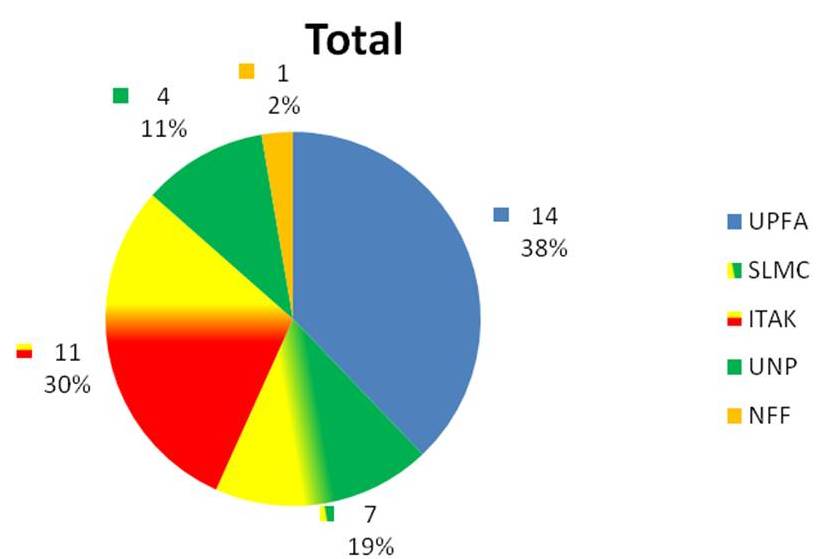 Having consulted senior representatives of political parties, including the Sri Lanka Muslim Congress (SLMC), CPSL General Secretary Senior Minister Dew Gunasekara yesterday said that the government should take up the issue with all political parties, which won seats at the Sept.8 poll for the Eastern Provincial Council.
The veteran politician was speaking to The Island after writing to General Secretaries of UPFA (14 seats, including two bonus slots), Illankai Tamil Arasu Kachchi (11 seats), the SLMC (7 seats), the UNP (4) and the National Freedom Front (1 seat), which shared the 37-member council.

DEW said that copies of the letter had also been forwarded to President Mahinda Rajapaksa and SLFP General Secretary Minister Maithripala Sirisena. The CPSL move came in the wake of US Assistant Secretary of State Robert Blake’s arrival in Colombo for consultations with the government and the Opposition.

Minister Gunasekara said that he had the blessings of the leftists such as Prof. Tissa Vitharana (LSSP) and Vasudeva Nanayakkara (Democratic Left Front). The onus was on the five political parties that had won seats in the Eastern PC to reach an understating on a working arrangement if they were genuinely interested in helping the people of the Eastern Province and democratic wellbeing, he said. “Let there be a working arrangement for a specific period in the Eastern Province. All political parties could share the credit for such an arrangement, though various people may give different interpretations.”

Asked whether the CPSL, as a constituent party of the UPFA, was making a move on behalf of the government, Minister Gunasekara emphasised that the country was no longer in a position to play politics with the national issue. There couldn’t be a better opportunity than an all-party administration to convince the international community that those having won seats were genuinely interested in national reconciliation, he said.

The CPSL, the LSSP and Democratic Left Front fielded candidates at the PC polls in the Eastern Province comprising Trincomalee, Batticaloa and Digamadulla electoral district, but none of them were returned.

Minister Gunasekara said that he had discussed the matter with SLMC General Secretary Hassen Ali on Wednesday. Regardless of what hardliners say, an agreement on the running of the Eastern PC was possible, the minister said, emphasising that it could be perhaps the only way the current impasse could be tackled. Responding to a query, the minister said the SLMC had been placed in an extremely difficult position due to both the UPFA and the ITAK pushing for its support. He asserted that it would be a mistake on the part of the UPFA as well as the ITAK to obtain the SLMC support at the expense of the other. “Don’t let the SLMC make a choice at the Eastern PC. We should be able to reach an agreement soon.” He said what he had gathered from his talks with the SLMC was that it was amenable to an all-party administration in the East.

Speaking to The Island immediately after the Eastern PC polls, SLMC leader Rauff Hakeem said that his party felt that a genuine effort was needed to prevent further polarisation. The Justice Minister emphasised the need to pursue reconciliation efforts, while acknowledging the danger in causing further uncertainties.

By Shamindra Ferdinando
IS