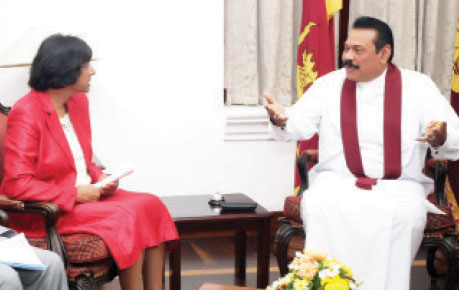 By Easwaran Rutnam
The government last week refused to budge on its stand over various issues during several meetings held with the UN High Commissioner for Human Rights Navi Pillay.
Pillay had called for the Prevention of Terrorism Act (PTA) to be abolished, disappearances to be investigated, and for accountability on some of the allegations over the final stages of the war.

As part of her tour of the country, Pillay visited parts of the final battle zone in Mullaitivu. Among the areas she visited was Mullivaikal, where several civilians were believed to have been killed.

She also had discussions with the families of some of those reported missing.

The UN High Commissioner for Human Rights also had discussions in Jaffna. Pillay visited the UN office in Jaffna as well as the Jaffna library and District Secretariat’s office. She met the Jaffna Government Agent (GA), Governor and other senior government officials in the area. Pillay also had a closed door meeting with civil society representatives in Jaffna.

Meanwhile at least two demonstrations were held during her visit to Jaffna. The demonstrators had urged Pillay, through placards and posters, to look into their family members reported missing during and after the war. Pillay had also met the wife of former LTTE Trincomalee political head Elilan in Jaffna.

Prof Peiris: No culture of impunity
External Affairs Minister, Prof. G L Peiris, in his briefing to Pillay, provided an update on matters relating to post-conflict development.  On the aspect of accountability, the Minister highlighted the action taken by the law enforcement authorities and cited the instances of some members of the Special Task Force having been indicted in relation to the killing of five students in Trincomalee, and the status of investigations with regard to the Muttur incident involving the ACF workers.

He further explained the difficulties encountered in identifying the perpetrators due to the conditions prevailing at the time of incidence, with regard to the ACF case. The Minister informed however that mobile phone evidence is being pursued in this regard, and therefore the case remains open. He drew a parallel with the case of the assassination of the former Foreign Minister late Lakshman Kadirgamar, where conviction has not been possible due to the lack of evidence.

He also pointed out that there is no culture of impunity in the country. In instances where evidence is available, action to conduct legal proceedings have been instituted irrespective of the status of those accused, which include politicians, public officials and officers of the law enforcement agencies.

Addressing allegations of disappearances, Prof Peiris explained that the Ministry of Justice has formulated a draft amendment to the Penal Code to criminalize enforced disappearances, and formulated amendments to the Criminal Procedure Code as well as the Human Rights Commission of Sri Lanka Act in order to give effect to recommendations in the National Human Rights Action Plan.

The Minister highlighted that no fewer than 3000 members of the armed forces have gone missing. He outlined the difficulties in identifying the missing due to instances involving persons having migrated to other countries holding multiple identities, and those host governments not divulging their details.

This fact aggravates the difficulty in compiling correct statistics. It was indicated that the repeated use of baseless and arbitrary figures in respect of disappearances, eventually acquire authenticity in the face of the massive propaganda that is being carried out against the Government of Sri Lanka.

Economic growth in the North
Referring to the process of reconciliation, Prof. Peiris opined that the magnitude of the challenges Sri Lanka faces and the brief period of time since the end of the conflict must be given due consideration.
While the economic dimensions, such as developing infrastructure and livelihoods, remain important, other issues are also being addressed by the Government, he said. The Minister stressed the importance of the economic contentment of the people in order for the reconciliation process to be viable and sustainable.
In order for other related aspects to be addressed, enormous amounts of resources are being channelled to the North, showcasing the resolve of the Government, which has resulted in a 27% growth rate in that region, as against the corresponding national figure of 7%. In this context the Minister informed that there are 225 bank branches and 76 finance and leasing companies that have been established in the Northern Province since 2009.

Regarding de-militarization, it was underlined that since the end of the conflict, all High Security Zones have been dismantled with the troops being re-located to military cantonments and bases. Further, he said that while rationalization of this presence would be considered in line with the national security interests of Sri Lanka, efforts are also underway to explore possibilities to relocate troops to other identified Government lands.

He explained that there is only one High Security Zone in Palaly which is essential for the security of the air field and the KKS Harbour. Regarding the attitude and the judgment of the general public in the areas of military presence, the Minister drew the attention of the UN High Commissioner to a report compiled by the Sri Lanka Office of the UN High Commissioner for Refugees, according to which, ninety five percent of the people who had been interviewed had expressed their satisfaction for the salutary role of the military and acknowledged the need for their presence in the vicinity due to safety reasons.

With regard to High Commissioner Pillay’s reference to the last days of the armed conflict, Prof. Peiris stated that the Sri Lanka military was involved in the largest hostage rescue operation in contemporary history.
It is factually known that the LTTE ruthlessly annihilated people trying to escape from their clutches. While noting that Ms. Pillay too had called on Sri Lanka to end military operations, the Minister stated that if Sri Lanka had acceded to that call the present ground realities would have been different. As a responsible government, steps had to be undertaken to safeguard the Sri Lankan people, while not heeding to calls of some external elements.

The Minister also referred to the High Commissioner’s concern over the inclusion of the police under the newly created Ministry of Law and Order, instead of the Ministry of Justice.  He indicated that her stated position is fundamentally unacceptable and does not move in accordance with the established procedures of Sri Lanka.

The Minister pointed out that the Police Department has consistently been under the Ministry of Defence and only briefly, 2002-2004, under an Interior Ministry. It has to be noted that most countries too have Police under Ministries other than Justice, and further, he indicated that the creation of the new Ministry of Law and Order under which the Police Department is now placed is in line with a LLRC recommendation.
The Minister also stated that in keeping with the government position, the visits of UN Special Procedure mandate holders will be scheduled following her visit and, in this context, invitations have already been extended to the Special Rapporteurs on the human rights of IDPs and on the right to education for country visits in December 2013 and January 2014, respectively.

Nothing to hide: PTA will remain

Meanwhile Justice Minister Rauf Hakeem said that he had told Pillay at his meeting with her that the government policy was that there are still national security concerns so the PTA will be retained.
The Minister said that among the other issues that were discussed was the witness protection bill and the freedom of information act. He said that it is up to the Media Ministry to bring the freedom of information act into force.

Meanwhile Pillay also met Minister Vasudeva Nanayakkara. Minister Nanayakkara said that the anti hate speech law, which has been mooted, was discussed with Pillay during his meeting with her.
Sinhalese civil organizations also had talks with the UN High Commissioner for Human Rights. The Eastern Province Sinhalese Civil Organization met Pillay as part of the scheduled meetings Pillay had in Trincomalee. A source at the Civil Organization said that they had briefed her on some of the atrocities committed by the LTTE during the war.

They also advised her to consider what people living in Sri Lanka say and not what the Diaspora keep on saying. The Eastern Province Sinhalese Civil Organization also handed over a petition to Pillay and obtained an assurance from her to address issues faced by the Sinhalese.

The civil organization also told Pillay that all the communities in Sri Lanka are now living together in a post war climate.

He said that Pillay had the opportunity to see for herself the ground situation and reach a conclusion accordingly. The Minister also said the government hopes Pillay will give a fair and balanced report on Sri Lanka to the UN Human Rights Council in Geneva following her visit to Sri Lanka. He was of the view that her impression of Sri Lanka should be positive from what she sees on the ground.

Pillay is to make an oral statement on Sri Lanka to the UN Human Rights Council in Geneva this month.
SL