Gotabhaya tells Pillay: US had no moral right to move Geneva resolution 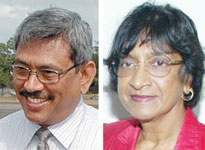 The Defence Secretary pointed out the irrationality in the US action in the wake of atrocities committed by its forces in various parts of the world. The US twice moved resolutions in Geneva condemning Sri Lanka after an abortive Canadian bid to humiliate the country.

The Defence Secretary met the UN delegation, headed by Pillay, at the Defence Ministry on Friday.

Asked whether Pillay had responded, the Defence Secretary said that the UN delegation remained silent. “Obviously, Pillay couldn’t have endorsed my criticism of US action, though the entire world knew of death, destruction and instability caused by the super power,” he said.

Whatever the criticism of the government inviting the UN rights chief to visit the country, the week-long visit would have definitely helped Pillay to realise the ground situation, the Defence Secretary said. In fact, Pillay’s visit facilitated government efforts to dispel intense propaganda which depicted the Northern and Eastern Provinces as ‘closed military zones’ even four years after the conclusion of the conflict, Rajapaksa said.The Defence Secretary said that visiting foreign dignitaries had been misled by those working overtime to destabilise the country. “During our meeting at the Defence Ministry, the UN Human Rights commissioner alleged that the government had removed road blocks in the Northern Region just ahead of her visit. She was convinced the government would temporarily do away with road blocks during a visit. Obviously, she was misled by the UN mission here or those who had met her here. I told her there was absolutely no need to do that. In fact, the number of road blocks should have increased during VIPs’ visits to guarantee their security.”

Asked whether Pillay had raised the much-talked about allegation that 40,000 people had been killed during the final phase of the war on the Vanni east front, Defence Secretary Rajapaksa said that he was very surprised the UN delegation had refrained from referring to the killings. Had she taken up the matter we would have asked her to furnish information regarding them and questioned the basis for the allegation, the Defence Secretary said.

Responding to a query, the Defence Secretary said that Pillay had been here on a fact finding mission and her mandate was to examine accountability issues in relation to the resolution moved against Sri Lanka at the UN. However, she had ended up taking up petty political issues at the behest of those who couldn’t stomach the eradication of the LTTE, he said. The Defence Secretary alleged that Pillay had declared that post-war Sri Lanka was moving towards an authoritarian state with democracy undermined and the rule of law eroded to appease those in the Opposition subservient to their foreign masters. “We are having elections at four different levels; presidential, parliamentary, provincial council and local government. People have the freedom to exercise their franchise to get rid of the government in power. It is unfortunate the likes of Pillay are blind to the ground reality and tend to issue statements without examining facts,” the Defence Secretary said. According to him, somebody in the Opposition had got Pillay to call Sri Lanka an authoritarian state. “Those who feared to call Prabhakaran a terrorist, happily describe the President as a dictator. The people are not blind to such machinations.”

Commenting on Pillay’s allegation that those who had demonstrated against the government and criticised the ruling coalition would be targeted once she left the country, the Defence Secretary said that during Friday’s meeting he queried whether people would join the protest organised by the TNA in Jaffna if they really felt they could become targets. They protested because they knew nothing would happen to them, he said.
IS