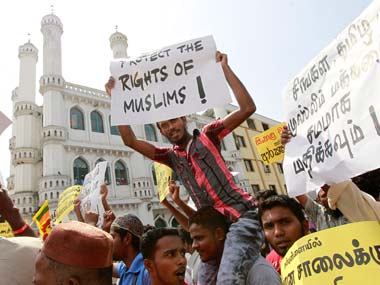 (AFP) Sri Lanka’s main Muslim political leader, who is also the justice minister, criticised his own government Friday for blaming religious tensions in the mainly Buddhist nation on Islamic fundamentalism.
Rauf Hakeem said he had been “disturbed” by recent comments from the country’s defence minister, Gotabhaya Rajapakse which warned of efforts to “promote Muslim extremism” in Sri Lanka.
“We are extremely disturbed by the specific reference to the Muslim community of Sri Lanka as possible breeding grounds of extremism within the country,” Hakeem said in a statement.

“I would like to publicly contradict the assertion of the Secretary of Defence,” Hakeem said in an unusual public outburst against Gotabhaya Rajapakse, who is the younger brother of President Mahinda Rajapakse.
Seventy percent of Sri Lanka’s 20-million-strong population are Buddhists, while Muslims are the second-largest religious group, making up just under 10 percent.

There had been an increase in attacks against mosques and Muslim-owned business and their lifestyle since last year, heightening religious tensions on the island.

Much of the violence had been blamed on new Buddhist hardline groups allegedly drawing support from the authorities.

Gotabhaya Rajapakse, one of the country’s most powerful figures who is credited with crushing Tamil Tiger separatists in a military offensive in 2009, has denied supporting hardline Sinhalese-Buddhist groups.
However, at a seminar hosted by the military on Tuesday he said: “One of the consequences of the increasing insularity amongst minority ethnic groups is the emergence of hardline groups within the majority (Sinhala-Buddhist) community.”

“It is a known fact that Muslim fundamentalism is spreading all over the world and in this region,” Rajapakse said. “The possibility that such extremist elements may try to promote Muslim extremism in Sri Lanka is a cause for concern.”

Hakeem, whose Sri Lanka Muslim Congress is a partner in Rajapakse’s ruling coalition, warned that Sri Lanka may be antagonising Islamic nations by making generalised statements about Muslim fundamentalism.
He said Iran, Saudi Arabia and Pakistan had been strong allies of the Colombo government when it faced allegations of war crimes at the UN Human Rights Council.

Hakeem warned Rajapakse not to interfere with religion and culture and leave it in the hands of the respective people “as in the case of all enlightened democracies”.
AFP