Gotabhaya Rajapaksa: Is this disciplined and lawful conduct? – Friday Forum 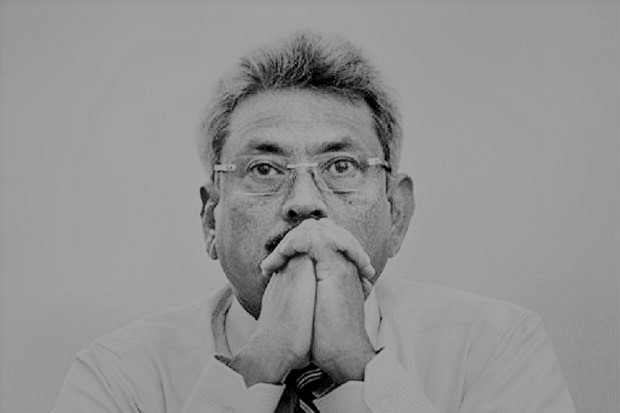 It is now three months since the interpretation of our constitution by the Supreme Court of the country was respected by the President and the relevant political leaders, and the constitutional crisis he created was resolved. Yet the country continues to be trapped in problems of critical concern for all of us.

The Supreme Court decided that President Sirisena had acted in violation of the constitution and yet Parliament and the country have not questioned his right to hold this office. When national networks focused on the swearing in of the Prime Minister and the Cabinet, we witnessed the supreme irony of these people taking an oath of office to act according to the constitution before the President who had violated it. These developments seem to have encouraged the President to continue to act in a manner that conflicts with his responsibilities, as well as the pledges that he made to the people when he was elected to office in 2015.

In public statements, most recently in parliament, the President has attacked the Constitutional Council and the Human Rights Commission, where neither of these institutions has representation and hence no right of reply, encouraging further attacks against them.

The President has questioned the credibility of the very institutions he contributed to establish through the 19th Amendment. This amendment reintroduced them with some modifications, after the concept of a Constitutional Council and Independent Commissions had been rejected in the 18th Amendment enacted during the Mahinda Rajapakse administration.

These institutions were brought back because it was recognized by Parliament that they were necessary to restrain abuse of executive power, and help ensure governance that is accountable to the people. The Constitutional Council and the Human Rights Commission are expected to function without political interference by the President. We understand from the Speaker’s statement that recent decisions of the Council were made by consensus, following guidelines adopted by the Council. The Human Rights Commission has received recognition for its good work both nationally and internationally. It is unacceptable that the President of the country sullies the reputation of these constitutionally mandated public institutions. Friday Forum calls upon the President to desist from making statements that undermine their authority.

In response to the critical drug problem this country is facing, the President has decided to sign death warrants for the execution of drug traffickers. There have been no judicial executions in Sri Lanka since 1976 and successive presidents have consciously refrained from implementing the death penalty. Sri Lanka has, as recently as December 2018, supported the UN resolution calling for a moratorium on executions, with a view to abolition of the death penalty worldwide. This selective approach to administration of criminal justice, with no effort to strengthen law enforcement and respond to corruption and violence, seriously undermines the rule of law. Friday Forum urges the President to desist from re-activating the death penalty.

We as citizens must also be critical of the manner in which promises of good governance made by both the President and the government are continuously and cynically disregarded. The President has openly attacked the UNF government, including inappropriately, at the Independence Day celebrations. He has made it clear to the nation that he is on a collision course.

Recent actions of the government such as interference with the appointment of a senior public servant, and back tracking because of trade union action, do not inspire public confidence. Appointments of cabinet ministers, sullied with evidence of corruption instead of the new faces expected, have also contributed to frequent and further allegations of corruption and politicisation in financial administration and in tender procedures. There appear to be continued delays in prosecuting corruption cases. When major issues regarding the stability of the economy have been raised repeatedly, and the cost of living is getting higher by the day, how can the government justify the proposal to expand the cabinet as a National government? Citizens can rightly conclude that our parliamentarians and government leaders are only concerned with enjoying and sharing with each other more privileges of office, with total disregard for the cost to citizens who elected them to office.

Confrontational politics has been the bane of this country and has reached new levels. We see this in the approach to constitutional reform. Though public consultations were held and some good reports on different sectors have been produced, the final set of recommendations is embedded in controversy. The Prime Minister has failed to give the required leadership, while other members of the government and opposition are trading insults in the matter of constitutional reform. The Leader of the Opposition is swift to fault the government, on several matters, but has no credibility when his administration acted in similar or worse manner. He is currently holding meetings across the country, making misleading statements in regard to ‘separatist constitutional amendments’. Abolition of the Executive Presidency and provision for power sharing to resolve the national question seem to be of little importance for politicians and party leaders. This is creating once again ethnic tensions which this country can ill afford. Recent bill boards in Colombo declaring that the President is the “seba sinhaya” (the true lion) gives messages of ethnic bias and identity politics, when the critical need is for religious and racial harmony and understanding.

The failure to hold Provincial Council elections, despite the urgent need to do so, is another manifestation of dishonesty in politics. It is a priority that all parties must, in the interest of the country, agree to enact the necessary amendments to the law, to enable Provincial Council elections to be held without any further delays. It is the obligation of the UNF to give the required leadership and prepare the legislation.

The pledge to dismantle the Presidential system of governance even by an amendment must be fulfilled. We as citizens must ask ourselves whether we have an environment for a Presidential election that will once again place in office a person functioning in a system of government, the usefulness of which the majority in this country has questioned over the years. While the SLFP and the SLPP are engaged in political strategies to identify a common candidate, with the current President also a contender, a growing constituency in the UNP, and independent voters are calling for a change in leadership. One of the potential ‘new’ candidates for this office, Gotabaya Rajapakse, is coming on a national platform for a “disciplined society”. This is a person facing criminal prosecutions in courts for corruption and abuse of power during his tenure as Secretary of Defence in the Rajapakse government. He has made public statements that he has information on two persons who were responsible for the horrors of abduction and killing during that government, but has not gone to the relevant authorities with the information in his possession. Is this disciplined and lawful conduct?

However if there is no consensus in Parliament on abolishing the Executive Presidency by a constitutional amendment and a referendum, there should be an early Presidential election after the Provincial Councils take office. We can then seriously reflect on what type of Head of State we choose to place in office and the grave implications for the future of our country. Dissolution of Parliament by a two thirds majority and a general election must follow. We then have an important opportunity to also make a concerted demand through the exercise of our vote for governance that is not selfish and corrupt, and respects the sovereignty of the people. We must let our politicians know through our votes that, as Abraham Lincoln is reported to have said, “You can fool all the people some of the time, and some of the people all the time, but you cannot fool all the people all the time.”

On behalf of the Friday Forum: