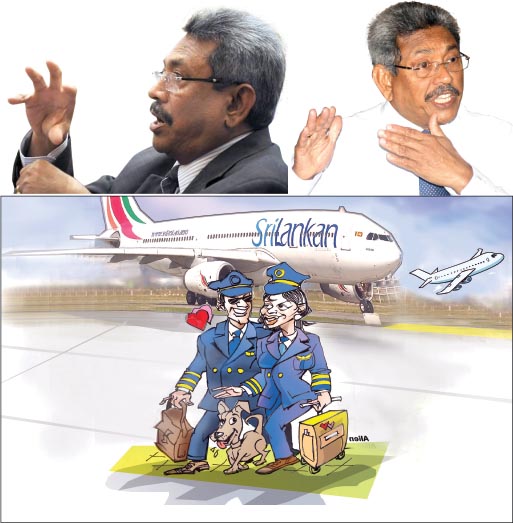 Defence Secretary, Gotabaya Rajapaksa went berserk when contacted by The Sunday Leader to clarify and find out if he was aware that the management at SriLankan Airlines had taken a decision to change a wide bodied A340 scheduled to fly to Zurich on Friday July 13, to a smaller A330.
The change was to be made so that a SriLankan Airline pilot, who is dating a niece of President Mahinda Rajapaksa could personally fly the aircraft that would carry a ‘puppy dog’ for Defence Secretary Gotabaya Rajapaksa from Zurich.

The Sunday Leader was told by senior airline pilots that 56 passengers would have had to be off-loaded if the aircraft was changed.

When it was pointed out that bringing the dog was not the issue – but a loss of revenue for the airline as an entire aircraft was to be replaced with a smaller bodied plane – resulting in the loss of 56 passengers, Rajapaksa turned abusive.

Using foul language he screamed, “If you write one bloody word I will sue the writer and your newspaper – which I have already done – I am not afraid of the bloody courts – I will sue you and shut down your f……. newspaper.” (see box for full conversation)

The Sunday Leader was told that the decision to change the aircraft scheduled to fly to Zurich on Friday July 13, from an A330 back to an A340 was made only after members of the Pilots’ Guild vehemently protested to the Head of Flight Operations Capt. Navin de Silva.

However, both Capt. Ruwan Withanage, President of the Airline Pilots’ Guild of Sri Lanka (ALPGSL) and Capt. Navin de Silva subsequently denied that senior pilots had pressured the management into reverting on their original decision to fly an A330 instead of an A340 to Zurich to suit Capt. Wijesinghe so he could bring down the puppy.
Kapila Chandrasena, Chief Executive Officer for SriLankan Airlines when first contacted refused to answer any questions on this issue over the telephone but asked for an email to be sent. After this was done, he replied saying he would request the Manager of Crew Resources to respond to our email.

Instead, Ranjith de Silva, Senior Manager Corporate Communications, sent us a response which said, “aircraft allocation to routes are based on the flying range. A330/A340 aircrafts are generally used for long range travel.” He added that generally an A330 or A340 is deployed on the European routes, while the change in the aircrafts is based on the commercial requirements.

He refused to comment on whether or not a dog for Rajapaksa was to be transported on this flight.
Kapila Chandrasena however subsequently did speak with us reiterating that he knew nothing of this matter. Asked if he did not know about the puppy dog to be brought down from Zurich for the Defence Secretary he said, “No. I know nothing – I don’t know what this controversy is all about”.

Asked if at any stage a decision was taken to change an A340 scheduled to fly to Zurich on Friday July 13, to an A330 in order to accommodate Capt. Praveen Wijesinghe to fly to Zurich, Chandrasena replied, “we do make those decisions based on passenger load – and that we do all the time though usually it is an A340 that flies the second leg from the Middle East to Zurich”.

It was to ascertain the veracity of this story that we contacted not only SriLankan Airlines officials but the Defence Secretary as well to find out if he was aware of this situation.
Gotabaya Rajapaksa confirmed that indeed Capt. Praveen Wijesinghe was to travel on July 13 to Zurich to bring down a puppy dog for his wife. “He is a friend of mine and he offered to do so,” Rajapaksa said.

However, Capt. Wijesinghe contradicted Gotabaya Rajapaksa by saying, “No, I do not even know if we would be bringing a dog from Zurich to Colombo. That sort of information is not known until the day of the flight.”
Wijesinghe after making this pronouncement telephoned us again to warn us saying, “If nothing but the truth is reported about my girl friend or myself, I will be forced to take legal action.”

The fact is, Capt, Wijesinghe is rostered to fly the first leg of this journey – Colombo – Kuwait or Doha (the middle eastern destination is decided depending on the passenger load) on an A330 and from thereon passenger on an A340 to Zurich.

Wijesinghe admitted to The Sunday Leader that he was indeed recently rostered to fly an A330 on the first sector from Colombo to Kuwait or Doha on Friday July 13. He said he would fly the initial sector up to the Middle East and thereafter travel the rest of the journey as a passenger. “I will only be flying the A330 leg, while the A340 will be flown by someone else.” He further said that he is not qualified to fly an A340 and if he did he would be facing a possible jail term.
With additional reporting by Dinouk Colombage

“You Are Pigs Who Eat Shit” – Gotabaya Rajapaksa 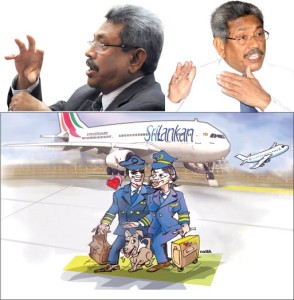 When contacted to find out if he was aware, if indeed an aircraft scheduled to fly to Zurich was to be changed to accommodate a personal friend and pilot who had offered to ensure the safe passage of a puppy dog for him, Gotabaya Rajapaksa turned abusive and screamed at this journalist in two subsequent telephone conversations in raw filth.

On Thursday July 5, excerpts of the first telephone conversation:

FJ: Mr. Rajapaksa I do not know if you are aware but we have been told that a SriLankan Airlines flight is to fly to Zurich next Friday to bring down a puppy dog for you?

FJ: Absolutely. But that is not the issue. We were told that Capt. Praveen Wijesinghe has personally offered to fly to Zurich to bring this dog for you?

GR: Yes. So what? He is my friend – I have friends at SriLankan former Air Force officers who will do me favours – What is wrong with that?

FJ: But this pilot is not qualified to fly the A340 – and so initially SriLankan was pressured to change the aircraft to an A330 in order to accommodate him…

GR: No aircraft was changed…

FJ: That decision was reverted only after the President of the Pilots Guild objected …

GR: Nobody objected! If you write any bloody thing about this I will sue you! I am not afraid of the bloody courts! I have already sued you I will sue you again! That is my right!

FJ: Yes. But it is also my right as a journalist to ask you for your side of the story or clarify this story with you since it involves you.
GR: You go ask SriLankan Airlines!!

FJ: We already have. However the issue is this. Any pilot can bring down a dog – it is all about controlling and ensuring the correct air pressure in the cabin. Why should Capt. Praveen Wijesinghe be chosen despite him not being able to fly the aircraft on one sector and having to passenger as a result…

GR: So what? Yes he is passengering so what is wrong with that? I am telling you again if you write any bloody word about this I will sue your f…..g newspaper – this is the way you all wrote about the MIG deal – without checking you bloody… wrote your f……g version all because somebody told you something…

FJ: Which is why I have called you. I am not going by what ‘somebody’ told me. I called you to get your side of the story and to clarify this issue.

GR: You write one bloody word and I will sue you!!! I will sue the writer and your f…..g paper again!!

FJ: Mr. Rajapaksa are you threatening me?

GR: Yes! I am threatening you! Write every single word I have told you if you want – you write a bloody f…..g word and we will see…

FJ: Mr. Rajapaksa I called you as a journalist to inform you of what was happening and get your version but all you have done is abuse me in raw filth…

On Thursday July 5, I again telephoned Mr. Rajapaksa after being informed that a VIP had informed him about the matter and Rajapaksa had said he did not know an aircraft was to be changed in order to accommodate Capt. Praveen Wijesinghe to facilitate the bringing down of the dog in question. Rajapaksa had told the VIP that if this was the case he would fly the dog down on another airline.
I then decided that given the fact that he would take action on the matter and ensure there was no loss in revenue to SriLankan Airlines, I would not carry the story. I however telephoned Mr. Rajapaksa again to tell him that my decision was based purely on him promising to take action and not because he blatantly threatened me the previous day and used foul language.

Excerpts of the telephone conversation on July 6, 2012

FJ: Mr. Rajapaksa I am calling you again because I have now been told that Mr. …….. spoke with you this morning and you had said you were not aware that the management at SriLankan were changing a plane resulting in a loss of 56 passengers in order to accommodate Capt. Praveen Wijesinghe to bring down a puppy dog for you…

FJ: True. But the fact is a decision like this was taken and later changed when pressure was brought on the management by senior pilots…

GR: That is not correct! I have since checked and there was no such decision.

FJ: There definitely was. However since you have promised to take action I have decided to hold the story but I want you to know that I am not doing so because you threatened me yesterday…

GR: You don’t? That is your ego!! You are a shit, shit journalist. A f…..g shit. A pig who eats shit! I will go to courts!!! I will not withdraw the case on the MIG deal – this is how you wrote…

FJ: I had nothing to do with that story so I cannot comment.

GR: But I will put you in jail! You shit journalist trying to split this country – trying to show otherwise from true Sinhala Buddhists!! You are helped by the US Ambassador, NGOs and Paikiasothy – they pay you!!!

FJ: I hope you can hear yourself Mr. Rajapaksa.

FJ: On your directive?