Getting Reconciliation Right in Sri Lanka After Rajapaksa 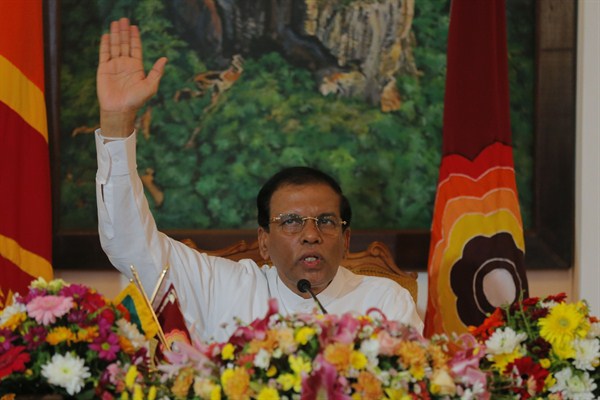 It has been a bad year for former Sri Lankan President Mahinda Rajapaksa and his nationalist support base, which comes predominantly from the country’s majority Sinhalese ethnic group. Rajapaksa’s rout in January’s presidential election, followed by his August defeat in parliamentary elections, can be seen as nothing short of a mandate from the Sri Lankan people to distance themselves from his authoritarian tendencies and divisive policies and move toward political reform and reconciliation.

Rajapaksa managed to secure a parliamentary seat in Kurunegala district, a stronghold of the United People’s Freedom Alliance in the Sinhalese heartland. But his dissident faction of the UPFA was unable to win enough seats to force President Maithripala Sirisena, who defeated him in January and heads the UPFA, to reconsider his appointment of Ranil Wickramasinghe of the rival United National Party (UNP) as Sri Lanka’s prime minister. While the UNP overcame the threat of a resurgent and re-energized Rajapaksa and won the August elections, it failed to gain a majority of seats in parliament. In a sign of Sri Lanka’s domestic stability, the UNP entered into a unity government with the UPFA last month.

August’s results were a relief to Sri Lanka’s minority Tamil and Muslim communities, which voted in significant numbers—the culmination an eight-month-long political transition in which Rajapaksa, although marginalized, was not entirely vanquished. Indeed, for Sirisena, Wickramasinghe and much of the Sri Lankan electorate seeking to bring about tangible reforms, the only way to overcome Rajapaksa’s specter is to deliver on the reforms promised following the January and August elections.

Most urgently for the new administration will be how Sri Lanka goes about mending its troubled past. Rajapaksa was president when the government, in 2009, brought about the end of the three-decade-long Sri Lankan civil war against the Tamil Tigers through brute force, from extrajudicial killings to forced disappearances and torture. But the six years since the end of the war have seen little accountability for the crimes committed. In mid-September, the government released its long-awaited proposal for the establishment of a truth, justice and reconciliation commission, as well as an office of missing persons and an office of reparations.

While the long-delayed measure was applauded by many in Sri Lanka, others, especially within Sri Lanka’s Tamil community, have criticized the proposed commission, because it doesn’t require the presence of international lawyers and investigators. Two days after the Sri Lankan proposal, the United Nations published its own long-delayed report calling for a special court with international lawyers and judges to investigate crimes committed during the civil war. The coordinated roll-out of the proposal and report represented a choreographed denouement of the stand-off between the two sides over Sri Lana’s previous unwillingness to address the issue of accountability. Nevertheless, the divergence between the two proposals underscores the tough balancing act facing the new government: remaining the face of the reforms and national reconciliation, but doing it in a manner that is legitimate in the eyes of both Sri Lankan Tamils and the international community.

Both Sirisena and Wickramasinghe will be keenly aware of the fact that their ability to deliver on much of their other proposed reforms will only be achieved by getting reconciliation and accountability right. Reversing Rajapaksa’s earlier rejection of international involvement in the civil war-era investigations can be more easily achieved now that his support has diminished and the mandate for change is there. If the new administration passes on this opportunity, it runs the risk of losing much of its credibility.

But getting reconciliation right is closely connected to reforming both the rule of law and the security sector in Sri Lanka, both of which were the foundations of Wickramasinghe’s election platform. Sri Lanka’s laws still do not explicitly criminalize war crimes and forced disappearances, vestiges of the extraordinary powers granted to the presidency under Rajapaksa.

Drafting a new constitution that devolves power from the center, coupled with greater accountability at the local level, are central tenets of the transparent, good governance model that Wickramasinghe and Sirisena hope to institute. The mandate given to them by the Sri Lankan people in August is a testament of the desire to turn their backs on Rajapaksa’s divisiveness. But it won’t be easy for the government to satisfy everyone. It needs the international community to buy into these reforms, to say nothing of Sri Lanka’s minority communities as well as a quorum of the Sinhalese majority that still might hold the old “Rajapaksa model” in high regard, since it broke the back of the Tamil Tigers and brought relative peace to the war-torn island.

The key to gaining this last group’s approval will be transforming the crony capitalism of Rajapaksa’s system and bringing about better economic development. Wickramasinghe has already declared his plans to root out nepotism and corruption in the education and health care sectors. In the long term though, his pro-business stance, in contrast to the UNFP’s relatively autarkic socialist leanings, must seek to convert Sri Lanka’s business environment from a small-scale domestic market to one more closely linked to the global economy by courting foreign investment.

Rajapaksa ostracized investments from India and Western states by linking Sri Lanka to China’s business and military interests. During his time, collaboration with China increased significantly, including a highly controversial Chinese project to build a major port off of Sri Lanka’s strategically vital western coast. Since Sirisena’s January victory and even more so after the August elections, India and Sri Lanka have pledged to boost economic and maritime ties, a welcome change for New Delhi. India, for its part, must veer away from pandering to Tamil sectarianism, especially radical fringe elements within India who seek to continue to push for Tamil autonomy in northern Sri Lanka.

The West also has an important role to play in bolstering Wickramasinghe and Sirisena’s position as they move toward implementing concrete reforms. Since fighting between the Tamil Tigers and the government resumed in 2005, Sri Lanka has been off the list of countries qualified to receive funding through the Millennium Challenge Corporation, a U.S. foreign aid agency. Reconsidering Sri Lanka’s eligibility would be a small yet significant step towards reviving businesses and bringing about development in areas of the country’s north and east that remain devastated from the war.

Rejecting Rajapaksa at the ballot box twice in one year is a conclusive message from Sri Lankans to their new leadership about the need for decisive reform. While the challenges confronting the government are monumental, it can make the changes Sri Lankans demand for an economic and social revival only by pushing through the political changes vital to healing a wounded nation.

Shashank Iyer is a graduate student at the Jackson Institute for Global Affairs and the School of Management at Yale University. He studies and works on issues related to forced migration and population resettlement. You can follow him on Twitter @skiyer15.