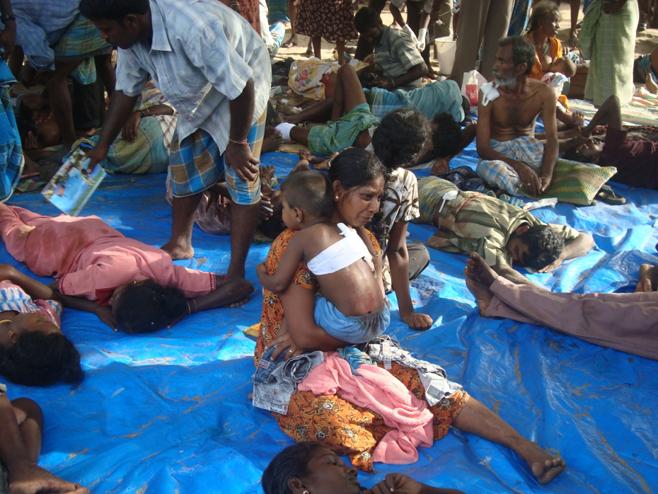 Image: One of the accusations against General Jayasuriya is that bombing medical facilities in the war zone.

Minister and Field Marshal, Sarath Fonseka says that he has information regarding  crimes committed by General Jagath Jayasuriya during the war and he is  “ready to explain the crimes committed in detail if proper legal action is instituted”.

General Jayasuriya, a former army commander of Sri Lanka has been charged for war crimes in Brasil where he served as the Sri Lanka Ambassador. The case filed against him by Latin American human rights organisations grabbed the media headlines  last few days. The case was filed on 28th August.

After returning to Sri Lanka in the wake of the case filed against him, General Jayasuriya made a statement saying if any one held responsible for these accusation it is Field Marshal  Sarath Fonseka, who was the commander of the Army at that time .

General Jagath Jayasuriya, was the  Vanni commander during the last phase of the war between the Sri Lanka state and the  LTTE. He was promoted as the Army Commander by president Rajapaksa.

The Daily Mirror  quotes Field Marshal Sarath Fonseka saying that “I received complaints that Mr. Jayasuriya was engaged in crimes as Vanni commander with regard to those who were arrested. He continued the same strategy even after he was promoted as army commander. I have information regarding those who committed the crimes. I am ready to explain the crimes committed in detail if proper legal action is instituted.”

Sarath Fonseka has told a  a news conference on today (1st of September) that he attempted to launch an investigation against Mr. Jayasuriya just after the war had ended but he was removed from the post of army commander when the investigation was launched.

“I was aware that he committed crimes and I tried to initiate an investigation. As the initial step, I arrested Mr. Jayasuriya’s Aide-de-camp,” he has  said.

The minister has said crimes had been reported from certain places and added that he was of the view that an investigation should be launched to find out those who committed such crimes to protect the dignity of the country and the army.

“They are not crimes that the army has to be collectively responsible for but they are isolated incidents committed by a few individuals. We need to reveal those incidents and punish those involved,” he said and added that if proper action was not taken within the country, the UN and the Security Council could do so according to international conventions.

“If there had been any crime, legal action can be taken against those involved according to martial law. Country’s law is not necessary for that,” he has  said.