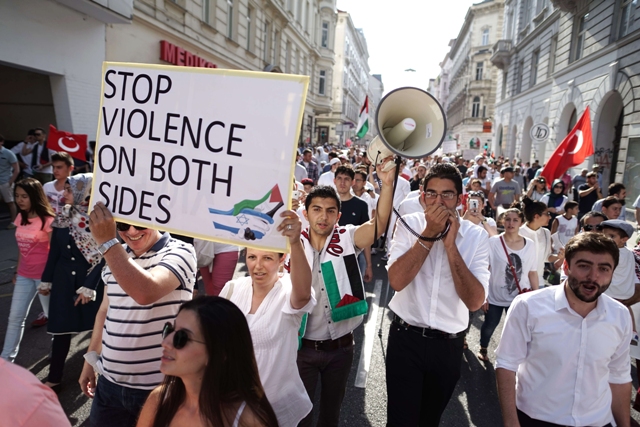 By Navi Pillay
The hostilities between Israel and Hamas, and other armed groups in Gaza, have raged now for almost a month, causing immeasurable suffering and damage. The current tenuous ceasefire offers a critical chance for the parties to move from violence to peace.

Alongside others in the international community, I have repeatedly stated to all parties that civilians must not be targeted, and must be protected. Yet, as of 5 August, some 1,350 civilian Palestinians, including more than 400 children, had been killed, and thousands injured, since the launch of the Israeli military operation on the night of 7 July. For Palestinian civilians caught in the midst of the hostilities, there is little protection or refuge to be found.

Israeli civilians face a barrage of rockets and mortars launched from Gaza, causing fear and insecurity. Since 7 July, three civilians have been killed in Israel and dozens more wounded.

I have consistently condemned the indiscriminate rocket fire from Gaza into Israel, and I have been equally clear that military assets should not be located in densely populated areas. However, I reiterate that actions by one party do not absolve the other party of its obligations under international law.

International law requires application of the principles of distinction between civilians and combatants, and between civilian objects and military objectives; proportionality; and precautions in attack. Any attacks in violation of these principles, on civilians, homes, schools and hospitals, must be condemned, and may amount to war crimes.

The current conflict in Gaza cannot accurately be viewed in isolation from repeated Israeli military operations in Gaza, or from the protracted occupation.

In 1967, Security Council resolution 242 affirmed that fulfilment of the principles of the United Nations Charter requires the withdrawal of Israel’s armed forces from territories occupied, and a just settlement of the refugee problem.

That resolution – like many subsequent resolutions relating to the Occupied Palestinian Territory – has been ignored. Many of those trapped in Gaza today are refugees and their descendants. Repeated hostilities, occupation, the suffocating effects of the illegal blockade in place since 2007 and of the access restricted areas imposed by Israel, have made life in Gaza virtually unsustainable.

The severe effects of the occupation in Gaza and the West Bank, including East Jerusalem, on human rights, including the right to self-determination, must be addressed.

The humanitarian situation in Gaza is at breaking point. Thousands of homes have been destroyed and hundreds of thousands of Palestinians have been displaced. People need water, food, shelter, electricity, and above all safety. However, hospitals and ambulances, schools, including even United Nations premises, have not been protected in this conflict.

Hospitals, and personnel engaged in searching for, transporting and caring for wounded and sick civilians, must be safeguarded. The very specific protective status of these locations must be respected at all times. In addition, civilian objects such as homes and schools are prima facie not legitimate targets, and all necessary precautions should be taken to protect civilian lives.

It is a terrible failure for humanity not to act to avert yet another devastating crisis in Gaza – one that has now superseded, in casualties and duration, the Israeli military operations of 2008/2009. The need for investigation and accountability raised then, and after the 2012 military operation, have not been met. A lasting solution to this protracted conflict must be found.

The Commission of Inquiry established by the Human Rights Council last month will help to establish clarity regarding acts committed by all parties, thus beginning to address accountability issues related to the current hostilities in Gaza, as well as to the West Bank including East Jerusalem. Its conclusions and recommendations, which will be presented in March 2015, should be carefully considered and followed with appropriate action.

The 2009 Fact-Finding Mission on Gaza noted the need for the International Criminal Court to address the situation. Such a recommendation is still relevant today. The ICC’s role is to end impunity and render justice in cases where national authorities have been unable or unwilling to do so.

Over the years there have been constant efforts to evade the binding nature of international human rights law and international humanitarian law, in Israel and the Occupied Palestinian Territory. But there can be no exceptions to these legal norms. They ensure that our societies maintain respect for common values and human dignity – indeed, human life.

For the sake of both Palestinians and Israelis, the parties to the conflict, the Security Council, the General Assembly and individual States must act to bring this dreadful conflict to an end. The Secretary General has strongly called for talks, to lay the groundwork for a durable ceasefire and for comprehensive negotiations on the underlying issues – including an end to the illegal blockade of Gaza and to almost five decades of occupation. This is indeed the only hope for peace.
[Photo:Pro-Palestinian protesters shout slogans and hold a protest in Israel]
[Speech delivered by Navi Pillay at the Informal Plenary Meeting of the General Assembly on the situation in Gaza/
6 August 2014]
OHCHR