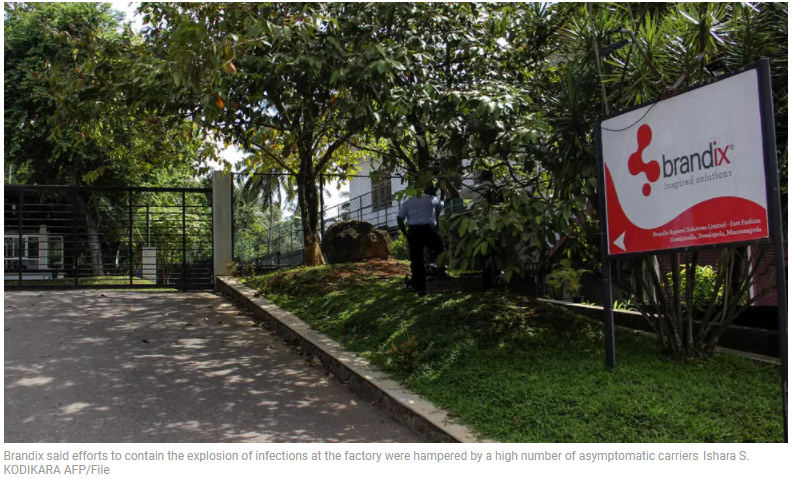 COLOMBO (Thomson Reuters Foundation) – When women at a Sri Lankan garment factory started to develop coughs and fevers, few took it seriously – the South Asian island had few cases of the coronavirus and the onset of the rainy season meant colds were to be expected.

Staff who fell ill saw the company doctor, but many went back to the production line having being told that the factory’s owner Brandix, which makes clothes for brands including Gap, Victoria’s Secret and Marks & Spencer, had orders to fulfil.

Now, the district of Gampaha, where the factory is located, is at the centre of Sri Lanka’s biggest coronavirus outbreak, with more than 7,000 cases – over half the national total.

More than 1,000 of the factory’s 1,400 workers have tested positive for COVID-19, putting Brandix – one of Sri Lanka’s largest apparel companies – in the spotlight.

Sri Lanka’s attorney general has ordered an investigation into whether the apparent spread of the disease from the factory could have been prevented, saying it “endangered human life”.

A progress report is expected by Nov. 13 on whether there was “negligence on the part of Brandix resulting in the spread of the virus”, said Nishara Jayaratne, the co-ordinating officer to the attorney general.

Brandix, which employs about 35,000 workers at plants across the country and is owned by the private Sri Lankan company Phoenix Ventures Ltd, has launched its own investigation.

Finance chief Hasitha Premaratnhe said its initial findings were that staff with a fever were sent home or taken to hospital, and it would take “appropriate action” if this was found to be wrong.

But workers and trade union officials who spoke to the Thomson Reuters Foundation said some of those who fell sick were asked to carry on working and others said they were given proper protective health (PPE) equipment.

“Some even fainted, but the company doctor gave basic medicines. All these sick women worked again, though they had some difficulties,” said one worker who asked not to be named, fearing repercussions for speaking out.

“We never suspected it was corona because everybody was complacent and employees shared their meals and did not wear masks inside the plant.”

Ashila Dandeniya, who heads the local trade union group Standup Movement, said Brandix workers reported temperature checks were not carried out consistently and said the company did not take their health condition seriously.

Brandix said it had health and safety measures in place including screening of staff, social distancing, mask wearing and temperature checks.

It reopened its factories in April when Sri Lanka’s government eased restrictions.

“We have appointed a high-level three-member independent committee to investigate into allegations levelled in the media,” said Premaratnhe, referring to reports of safety failings at the plant.

“Upon completion of the investigation, we will take appropriate action as per its findings.”

The island nation of 21 million people had managed to contain the coronavirus, imposing a strict lockdown from March to May and closing its borders to foreigners.

The garment industry – Sri Lanka’s biggest exporter, accounting for about 7% of the $84 billion economy – was allowed to restart operations in April.

Trade union officials said there were about 50,000 people working in the export processing zone near the Brandix factory, including cleaning and security staff employed by local agencies.

The area has now been placed under quarantine to prevent the outbreak from spreading and garment workers say they have been made scapegoats, seeing the measure as a form of punishment.

A group of local workers and activists have lodged a complaint with the Human Rights Commission of Sri Lanka saying some workers were taken to government quarantine centres against their will, which authorities have denied.

People sometimes needed time to prepare and any delays that resulted from this were “politely tolerated”, he added.

The Standup Movement’s Dandeniya, one of the complainants, said a group of garment workers had initially refused a late-night request that they go to the quarantine centre.

“We were brought to this quarantine centre as if we have done some grave crime,” one woman quarantined after coming into contact with a garment worker who tested positive for COVID-19 told the Thomson Reuters Foundation by phone from the centre.

“There were TV cameras with the health and police officials when they came to accompany us to quarantine. Some girls were dragged like animals,” said the woman, who gave only one name, Renuka.

Even for those quarantining at home, life is difficult, said Dandeniya.

“The workers are now in desperate situation because they don’t get their daily wages. Their livelihood is depending on their daily wages,” she said. “Also they have a problem in getting accommodation after the spreading.”

Brandix said it has continued to pay workers who are sick or in quarantine.

Anyone associated with the plant now faces being stigmatised by association.

When a Brandix team went to a local village to give food and supplies to staff there, local people barred them from entering.

Workers said they were now unable to find accommodation in the area.

“If I go to my village, the people are going to suspect that I got coronavirus and was treated for that,” said Kumari, a sewing machine operator for Brandix who gave only her first name, fearing repercussions from speaking to the media.

“It is really sad to see how the general public see us now. My boarding house owner asked me not to come until the COVID-19 menace is over. I don’t know where to go from here.”

Credit: the Thomson Reuters Foundation, the charitable arm of Thomson Reuters, that covers the lives of people around the world who struggle to live freely or fairly.