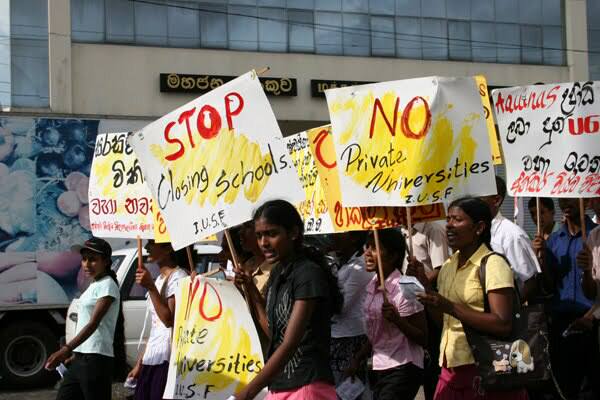 The Federation of University Teachers Associations (FUTA) expresses its grave concern and dismay regarding the remarks made by His Excellency President Gotabaya Rajapaksha at a meeting held to brief the Maha Sangha about the COVID 19 situation in the country and the Kotelawala Defense University (KNDU) Bill.

These remarks, which were widely reported on news channels and also included in a press release issued by the Presidential Media Division, show an alarming degree of ignorance regarding the higher education sector and its regulatory framework. Contrary to the President’s remarks that those opposing the KNDU bill do so in ignorance, we would like to point out that it is the President and those who advise him who seem to be either ignorant or engaged in willfully misleading the public.

The president’s remarks and the press release refer to a “UGC Act”. To the best of our knowledge no such document exists. We believe this is a mistaken reference the Universities Act of 1978 – which provides a visionary regulatory mechanism for university education in Sri Lanka and represents a legal framework that has stood the test of time for over 40 years.

The remarks made by the President suggest that the government intends to modify the Universities Act so that KNDU and other universities that currently do not come under the purview of the UGC can be brought under UGC purview.

This is a new and worrying development. It appears that given the intensifying public resistance to the proposed KNDU bill, which was presented to parliament but has been temporarily withheld from voting, the government is attempting ad hoc amendments to the Universities Acts to push through its short-sighted policies of corporatizing and militarizing university education.

Given a number of public remarks made by some senior politicians of this government, it is obvious that two narrow principles guide the government policy.

One is an extremely narrow-minded view about creating a ‘disciplined society’ and seeing education as a process of creating uncritical and unthinking ‘subjects’ as opposed to a democratic citizenry.

The other is an equally narrow-minded goal of turning university and higher education into a commodity determined by market principles.

We as the Federation of University Teachers Associations calls upon the government to immediately halt its highly arbitrary and non-consultative attempts at meddling with the university and higher education regulatory framework of this country. We recognize that higher education and university reforms are necessary and that the Universities Act of 1978 may require certain timely modifications.

However, any such modification needs to happen through a broad and democratic consultative process that both safeguards the free education principles that all post-independence governments of this country have ensured and at the same time protect the democratic spirit deeply engrained in the university system of Sri Lanka.

We are currently living through the deep and negative consequences of arbitrary decision making and the unnecessary encroachment of the military into areas of civilian governance.

The government’s hasty, non-consultative and ignorant attempts at university and higher education reform at this point, will simply lead to the creation of an education system and culture which will lack quality, rigor and will erode the fundamental values on which our education system is built.

We earnestly urge the government to immediately enter into a consultative process with all education sector stakeholders and we also call upon all segments of Sri Lankan society to resist and rally against the ad-hoc and shortsighted reform agenda of this government. We also urge the government to restructure the existing Kotelawala National Defense University so that it serves its intended purpose of providing higher education and training to officers of the tri-forces.

We would like to reiterate that all academic programs currently enrolled in civilian students should be integrated into the existing university system in the country and that a military institution is not a suitable place to provide higher education to civilians.