Freeing a soldier convicted for massacre dashes hopes for accountability in Sri Lanka – Editorial, The Hindu. 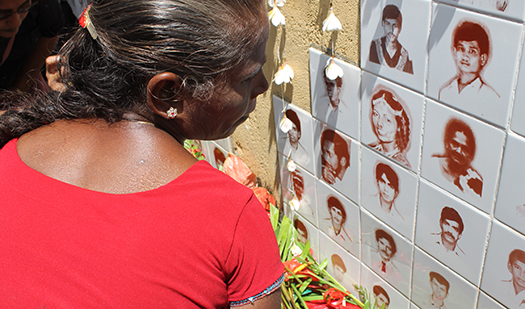 The grant of presidential pardon, on Thursday, to a Sri Lankan soldier on death row for murdering eight Tamil villagers has sparked justified outrage among those who have been demanding justice from the state for past crimes. Far from helping the cause of accountability for war-time atrocities, President Gotabaya Rajapaksa has gone the other way to nullify a rare instance of justice being ensured by Sri Lanka’s judicial system. Not many army men have been brought to book for attacks on civilians; but, in what came to be known as the ‘Mirusuvil massacre’, military police had immediately detained the soldiers involved, thus denying them impunity.

The victims included three boys aged five, 13 and 15. In December 2000, a group of internally displaced villagers had come to have a look at their war-ravaged homes at Mirusuvil in the Jaffna peninsula. They ran into some army men, who led them away blindfolded. Their bodies were later found in a sewer, with their throats slit. The only one who escaped later led the military police to the spot and turned a crucial witness. Five soldiers were indicted, and a special provision for having a trial before a bench of three high court judges was invoked. The plodding trial ended in 2015 with only one of them, Sunil Ratnayake, being found guilty. He was sentenced to death, but there is a moratorium on executions since 1976.

It hardly needs emphasis that the exercise of the power of pardon is an act of compassion, and not a tool for political or electoral messaging. However, President Gotabaya Rajapaksa has sent out a message to his vast body of supporters among the Sinhalese that he would not let ‘war heroes’ languish in prison, even if it means that the minority Tamils get a chilling message that substantive justice for war crimes will always elude them; and even when rendered, it could be undone with a stroke of the pen. There is also an electoral angle to the decision, as parliamentary polls were set for April 25, but have now been postponed in view of the global pandemic.

The process of granting pardon may have been going on in the run-up to the polls. Sri Lanka’s Constitution lays down a procedure that says the President must get a report from the trial judge, the Attorney General’s advice on that, and a recommendation from the Minister for Justice before he can pardon a convict. However, there appears to be no rule that such advice or recommendation is binding. Apart from some domestic voices from the Tamil leadership and individual politicians, the UN Human Rights High Commissioner and rights watchdog bodies have questioned the release of the soldier, rightly calling it an affront to the victims. The pardon, granted at a time when the country’s focus is on fighting COVID-19, is a serious setback to hopes that accountability could be brought about in Sri Lanka through domestic mechanisms.