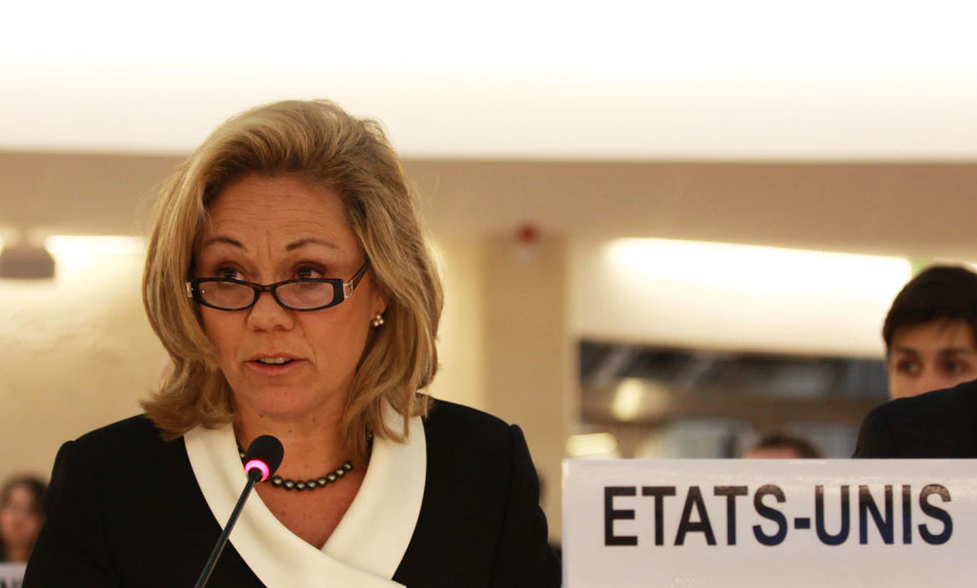 The Rajapaksa regime and family were directly implicated in the alleged war crimes at the end of the civil war.

Ambassador Eileen Chamberlain Donahoe, who served from 2010 to 2013 as the first U.S. ambassador to the U.N. Human Rights Council, says engagement with the council allows the U.S. to “influence global perspectives on crisis situations” and “gain international leverage to address human rights atrocities that otherwise might not have gotten attention.”

You served as ambassador to the council under the Obama administration. First off, what was your reaction to the announcement today that the U.S. become an active observer at the Human Rights Council?

This was a very important signal to send early in the administration. The Biden administration has been crystal clear that it believes strongly in multilateral diplomacy and intends to prioritize democracy and human rights. The announcement today is part of that larger effort and reinforces the message to the rest of the world that the United States is coming back to provide values-based leadership. The fact that the United States will invest diplomatic energy in an active observer role at the Human Rights Council even before it has the opportunity to become a full voting member underscores the belief in the value of rhetorical leadership and behind-the-scenes diplomacy. There is no doubt that the Human Rights Council will serve as a venue for rebuilding relationships and reestablishing its leadership in the world.

Why did the United States take such an interest in promoting transitional justice in Sri Lanka during your tenure?

When the U.N. Panel of Experts report was made public in April 2011, the evidence was so stark and damning that we felt it was impossible not to respond if we could find a creative way to succeed at the HRC. The clear and substantial evidence of war crimes and crimes against humanity committed during the final days of the Sri Lankan civil war simply could not be ignored.

Another important and shocking dimension of the report related to the failure of U.N. agencies on the ground in Sri Lanka with respect to their responsibility to protect civilians. There also was solid evidence of efforts by U.N. personnel to suppress the reporting of atrocities by civilians in the field. These U.N. failures provided significant motivation to get to the truth. In light of the facts that came out in the report, the U.S. delegation simply felt compelled to help support a process of transitional justice in Sri Lanka, and this motivated us to get creative with the diplomatic tools at our disposal.

How was the United States able to build such a diverse coalition of states to support the early Sri Lankan resolutions?

We knew it would be a very challenging to build a winning coalition on the Sri Lankan case. The vote came down to 24 members in support – which was the “magic number” in a voting body with 47 members. But as it turned out, only 15 voted against and 8 abstained. We got significant support from the African group, including from Benin, Cameroon, Mauritius, and Nigeria.

To get the level of support we achieved, the single most important element of our diplomacy was emphasis on Sri Lanka’s future, and the value and need for truth if Sri Lanka was to get past the atrocities of its civil war and move on to a peaceful future. In addition, on a more pragmatic level, with the first resolution on Sri Lanka, we utilized an unusual mechanism, Item 2 of the regular agenda, to call on the government of Sri Lanka to investigate, with the advice and technical support from the Office of the High Commissioner for Human Rights. This approach, rather than a confrontational approach, was as new tactic that had not be utilized before. The cooperative tone of the resolution was an important part of why some delegations were able to support the resolution. By taking a step-by-step approach, with a moderate and measured response to the situation, where the government of Sri Lanka was being asked to engage with the support of the U.N. High Commissioner, more countries were able to get onboard.

What was the significance of India voting in favor of the resolutions?

It would be hard to overstate the significance of India’s support in this case. First off, India’s support indicated that the case was serious enough that it could not be ignored, even with the political dynamics that it might trigger in the region and at home. Second, it signaled new potential for the approach of encouraging governments to engage with the human rights mechanisms of the U.N. India’s backing meant that the tone of the resolution was reasonable enough that it would be difficult to reject on the basis of it being overly condemnatory from the start.

The change of government in January 2015 helped, because the Rajapaksa regime and family were directly implicated in the alleged war crimes at the end of the civil war. By contrast, the new regime of President Maithripala Sirisena, at least in the beginning, articulated a willingness to at least consider options for justice and accountability. In addition, presumably the Sri Lankan government realized that they could not stop the process at the HRC outright, and they hoped to also appear to be approaching the investigation in a reasonable way.

Although just getting started, how should the Biden-Harris administration manage the upcoming HRC session? Is there a role for the United States to continue to push for justice and accountability, even though President Donald Trump withdrew from the council?

One small step the new team could take is to send very high-level U.S. representation to the Human Rights Council as early as possible. The damage done to the U.S. reputation during the Trump administration can be partially healed with not only early U.S. government engagement but also high level engagement. Secretary of State Hillary Clinton came to Geneva in December 2011 to meet with delegations and gave a ground-breaking speech on LGBT rights. That speech had a dramatic effect on the diplomatic community in Geneva and significantly changed the perspective of many delegations, which then translated into Human Rights Council support for LGBT rights. Before her speech, that was almost inconceivable. If Secretary Blinken were to go to Geneva to make a speech about U.S. re-engagement and our renewed commitment to protect human rights around the world, that would make a big impression and would certainly help build goodwill again quickly.

The bottom line is that renewed high-level U.S. engagement during this upcoming session – the first during the new administration – could be an effective way to deliver the message to other delegations that the protection of human rights still is a deeply rooted priority for the United States