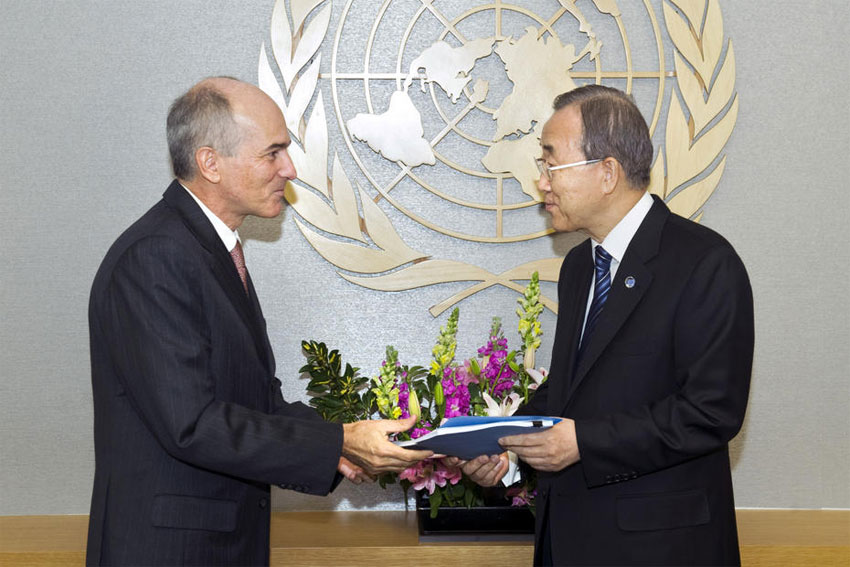 “The United Nations system failed to meet its responsibilities,” Secretary-General Ban Ki-moon said today as he released a United Nations report looking into the world body’s actions during the final months of the 2009 war in Sri Lanka and its aftermath.

In addition to finding that the UN system failed to meet its responsibilities, the report particularly highlighted the roles played by the Secretariat, the agencies and programmes of the UN Country Team, and the members of the Security Council and Human Rights Council.
Mr. Ban, in a statement, voiced his resolve for the world body to learn from its findings in order to better serve humanity, especially people caught in conflict.

“This finding has profound implications for our work across the world, and I am determined that the United Nations draws the appropriate lessons and does its utmost to earn the confidence of the world’s people, especially those caught in conflict who look to the Organization for help,” he added.

The report was produced by an Internal Review Panel, in the wake of recommendations made by another body, the Secretary-General’s Panel of Experts, which he established in 2010 to advise him on measures to advance accountability following the war’s conclusion.

The Panel of Experts’ report raised a number of issues, including those regarding the UN response to the situation facing civilians in the north of Sri Lanka in the last months of the war. It recommended “a comprehensive review of action by the United Nations system during the war in Sri Lanka and the aftermath, regarding the implementation of its humanitarian and protection mandates” – which, in turn, led to the internal UN review.

Sri Lankan Government forces declared victory over the rebel Liberation Tigers of Tamil Eelam (LTTE) in May 2009, after a conflict that had raged on and off for nearly three decades and killed thousands of people. The final months of the conflict had generated concerns about alleged violations of international human rights and humanitarian law.

The Internal Review Panel recently completed its eight-month study, and its head, Charles Petrie, presented its findings and recommendations to the Secretary-General this morning.
The Panel reviewed about 7,000 documents, including internal UN exchanges with the Government of Sri Lanka.

The Panel also met with a large group of people, including representatives of civil society and Member-States, and its recommendations build on previous reviews of UN action in theatres of escalated conflict.

The Secretary-General said that, as an immediate first step, he will organize a senior-level team to give “careful consideration” to the report’s recommendations and advise him on the way forward. “Other action will follow in short order,” he added.

While the Panel’s report also recognizes initiatives taken by the United Nations in the wake of the war to prevent a similar breakdown, the top UN official said he was “fully committed to ensuring that we do much more.”
In line with Mr. Ban’s approach towards transparency and accountability at the United Nations, the report has been made public.

The Secretary-General added that, as he has been the beginning of his tenure at the world body, he is committed to strengthening the United Nations and its core mission of protecting people from harm.

He noted that events today in Syria – where at least 20,000 people, mostly civilians, have been killed since an uprising against President Bashar al-Assad began some 20 months ago – are the latest reminder of just how crucial that work is.

“Our obligation to all humanity is to overcome our setbacks, learn from our mistakes, strengthen our responses, and act meaningfully and effectively for the future,” Mr. Ban said. “These principles and objectives drove me to establish the Panel and they will guide us as we take forward its outcomes.”