Flinging the gauntlet down to the Sinhala people 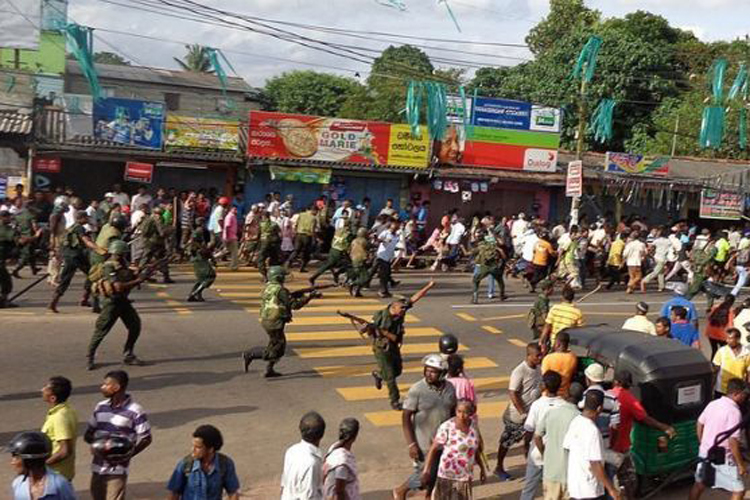 Kishali Pinto Jayawardena
As the full facts of the mayhem at Weliweriya came to light this week, the brutalities inflicted by the army on protestors and bystanders caught in the melee, was horrifyingly inevitable. It was a natural culmination of all that we had allowed to happen in the preceding years through clear complicity in applauding a Government bloated with arrogance and through equally clear omission coupled with a blind refusal to acknowledge the monster for what it has become.

‘Did they not know of the laws of war?’

Some reminders are important. The atrocities of Weliweriya occurred not only on the streets of this small and otherwise innocuous town but also inside the premises of a church to which people desperately searching for their loved ones, ran for shelter. As priests were abused in raw filth, young people were battered to their knees and hammered mercilessly by soldiers. Three young men died as a result, this being the official death toll.

Those critically injured numbered far more. Journalists covering the event were hounded and assaulted. Blood and bullet holes pockmarked and scarred the premises of the church where victims of all faiths had taken shelter.

As a Sinhalese villager of Weliweriya bemoaned aloud before television cameras, asking the Government as to whether it did not know that, according to the international laws of war, churches, hospitals and schools cannot be attacked by the army, we saw the ultimate irony.

It is at this point that the tragedies of the North and the South of this beautiful but inestimably tragic land come to meet. That bewildered Sinhalese villager asked much the same question that a Tamil civilian would have screamed when cowering under the shellfire strafing supposedly protected shelters four years ago. At that time, it was the war mentality that prevailed and the accompanying callous mantra that civilian casualties were collateral damage.

It is now that the South realizes that perhaps the gloss and the shine of that ‘humanitarian operation’ that was carried out in the North and East, was perhaps not all that it was shown to be. And that realization, if carried to its full growth, contains the seeds of ultimate reconciliation for the Sri Lankan people once the political monstrosities that we have been inflicted with currently, recede to nothingness like phantasmal shadows when surely that time comes.

Weliweriya was indeed qualitatively different from other excesses, primarily by the police, during the Rajapaksa administration. Like the Chilaw and Katunayaka demonstrations, here too, it was a question of basic livelihoods and in this case the most basic of all, the demand for clean water.

But in those previous cases, the level of state violence against demonstrators was less. Here, it was mindless and monstrous, bringing a war-like situation to a low level rural protest and shattering the façade of normalcy that prevailed post 2009. The wave of outrage that swept throughout the country was instantaneous. It showed the fragile nature of the so-called peace that is the sole boast of this administration.

Hereafter, it cannot be said any more that the Rajapaksa Presidency is aloof and uncontaminated by the pollution that surrounds it. The order to use the army in Weliweriya could have come only from the highest executive levels and the line of command responsibility is clear. President Mahinda Rajapaksa’s studied silence post-Weliweriya is testimony to this, bearing out its growing insulation from the pulse of the people which it was once skilled in testing. And the Government remains unrepentant, unmoved by the deaths or the anguish of those attacked and determined to teach the disaffected a thorough and telling lesson.

Officially, a typical ministerial mouthpiece could only stutter weakly that the army had been attacked and had only responded in self defence. Compounding this absurdity, the Defence Secretary and the President’s brother alleged that the Weliweriya violence was being used to launch an international war crimes inquiry, in response to a typical ham-handed request for an international inquiry into the incident by the UNP. On its own part, the UNP resorted to time worn strategies of statements and debates in Parliament.

We are also taught the unforgettable lesson that an amended and expanded Prevention of Terrorism Law (1979) is infinitely more dangerous than what was possible under the emergency regime. At least emergency regulations were promulgated by gazette, were debated in Parliament and even theoretically subject to judicial review.

Not so, the PTA which gives the perfect cover for a shadowy defence apparatus to operate in the dark only to emerge ruthlessly into cold, hard daylight when situations like Weliweriya occur. The PTA’s expansion, accomplished quietly even as the lapsing of the emergency was applauded, was a calculated risk on the part of this Government which understandably enough, has the most profound contempt for its political and civil society opposition alike.

Essentially however Weliweriya represents the gauntlet flung down by this Government to the Sinhala people. Its deliberate barbarity is a warning to other villages and other protestors in the South. Do this and see the punishments that you will receive. Similar warnings have been sought to be administered by other governments in the past. They have not been successful as history records. It remains to be seen as to whether the tide of history will be changed, this time around.

The front lines of new battles for Sri Lankans

What is certain however is that change will not come at the urging of luxurious platitudes on good governance by liberal democrats pontificating in seminar sessions. It will also not come through public statements issued by those who at a point of time, were part of and benefitted from the making of the veritable Frankestein monster that we see now.

If it comes, change will be propelled by ordinary people at the new frontlines of the battle for basic livelihoods and through a critical mass of anger built on Weliweriya and other like happenings. It will only come collectively by the people recalling old but forgotten bitter memories that the majority has as much to fear from a brutal State as the minorities and also by the understanding of the Tamil and Muslim communities that their grief and anger at injustice is not exclusive.

Amidst the outrage and the hopelessness therefore, Weliweriya also signifies a turning point though the direction thereto may yet be unclear. Misleading talk of an international war crimes investigation by this Government will not obscure that simple but powerful fact.
ST