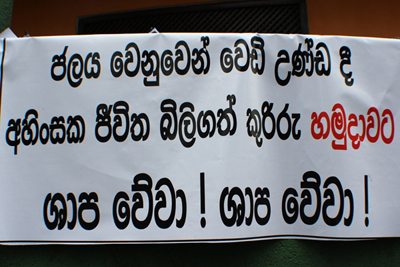 It’s undisputed that security forces killed three protesters, but the Sri Lankan government’s kneejerk reaction is to deny possible wrongdoing. Instead of promoting the military’s version of events, the government should order an independent investigation and prosecute anyone who violated the law. – HRW

(New York) – The Sri Lankan government should stop issuing misleading information and promptly create an independent and transparent inquiry into the deaths of protesters at Weliweriya on August 1, 2013, Human Rights Watch said today. At least three people were killed and several injured after security forces fired live ammunition at protesters who were demanding access to clean drinking water.

According to news reports, soldiers fired on local residents and Buddhist monks who were demonstrating for clean water on the Colombo-Kandy Road in Weliweriya, Gampaha district, about 25 kilometers from Colombo. The government of President Mahinda Rajapaksa claims that the soldiers reacted in self-defense against protesters who hurled rocks and petrol bombs and shot at them. The unclear circumstances leading to the deaths and injuries, as well as government statements exonerating the solders involved, highlight the need for an independent inquiry.

“It’s undisputed that security forces killed three protesters, but the Sri Lankan government’s kneejerk reaction is to deny possible wrongdoing,” said Meenakshi Ganguly, South Asia director. “Instead of promoting the military’s version of events, the government should order an independent investigation and prosecute anyone who violated the law.”

It is not clear why soldiers were deployed so soon without giving the police and local authorities a chance to handle what had been a peaceful protest. Video footage shows soldiers with military assault weapons approaching the protesters. The protesters begin running from the scene, some throwing sticks and other objects, before the soldiers appear to fire first in the air and then at the protesters.

Some protesters sought safety in a local church, whose exterior walls were at some point struck by bullets. Church officials and eyewitnesses told journalists that armed soldiers entered the church and physically and verbally abused people hiding inside. Church staff were warned against supporting the protesters, with one nun being held at gunpoint, and journalists had their cameras broken. After the incident, journalists reported being threatened by military personnel against reporting.

The government’s immediate response to the shootings was to defend the army’s actions. Defense Secretary Gotabhaya Rajapaksa said the army was deployed at police request, promised an investigation, but warned that, “There are elements resentful of the popularity of the armed forces and President Rajapaksa. We are mindful of their strategy.” Earlier, insisting that the troops fired in self-defense, Nimal Siripala de Silva, the Leader of the House, said investigators would look into whether there were “external forces or parties, behind that incident, instigating people against the security forces personnel” – which in Sri Lanka carries the connotation that a militant group was involved.

The Ministry of Defense posted an article on its website making similar assertions and claiming that video footage of shooters in uniform were demonstrators, not soldiers. The article, “Attempting a Sri Lanka Spring Through a Civil Coup d’Etat,” says: “Let us also not forget that while the accusing finger points at the army there are also plenty of army deserters who continue to possess military fatigue…. So there is no ruling out of such individuals also being used.”

In the face of mounting public pressure, on August 3 the army announced a commission of inquiry to look into the protests. The National Human Rights Commission also announced an inquiry. Neither of these institutions are in a position to conduct impartial investigations that would be viewed as credible. The army commission is headed by Jagath Dias, a former general whose 57 Division was implicated in war crimes during the final year of Sri Lanka’s 26-year-long armed conflict. The National Human Rights Commission’s independence has in recent years been severely curtailed by the government.

Human Rights Watch called on the government to ensure that security forces responding to protests abide by the United Nations Basic Principles on the Use of Force and Firearms by Law Enforcement Officials. The principles provide that security forces, including military personnel, shall “apply non-violent means before resorting to the use of force and firearms,” and that “whenever the lawful use of force and firearms is unavoidable,” law enforcement officials use force in proportion to the seriousness of the offense and the legitimate objective to be achieved, and minimize damage and injury. The intentional lethal use of firearms is only permitted when “strictly unavoidable in order to protect life.”

“The authorities’ decision to send soldiers armed with assault rifles to secure a demonstration is deeply worrisome,” Ganguly said. “The government needs to rethink its whole approach to ensure that people can peacefully and safely protest.”
HRW