Five reasons why Sri Lanka is not a real democracy 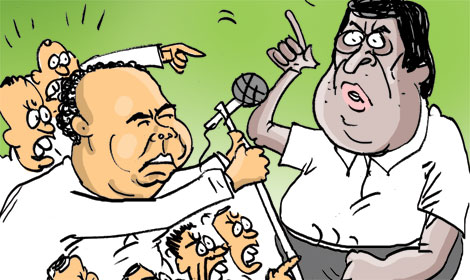 1. We are confused between ruling and governing

Words matter, because they have meanings; and meanings make understanding. We often use the words, ruling and governing interchangeably. But they have a very important distinction between them. A thermostat simply governs temperature, but it does not rule heat. Kings rule. Queens rule. But in a democracy only the people rule. Which essentially means there are no individual or group of rulers. It is categorically incorrect to use phrases like the “ruling class” or “ruling party” in a democracy.

Then who are these so-called politicians? They are simply the representatives of the people appointed by the people to serve only for the people (for a set period of time). The only words we should use to call them is “people’s representatives” and that’s it. Nothing more, nothing less. They are no “rulers”. They have specific jobs and deliverables clearly defined in the constitution which also spells out how to do their job. That whole process of them doing their job can be loosely called as “governance” and those representatives together is called the “government”. It does not mean governing the people.

(I believe the Sinhala words “Palanaya” suggests the concept of “ruling”; and “Palakaya” suggests the “ruler” and therefore should not be used in the context of governance. Yahapalanaya is more like ‘Good Ruling’ than ‘Good Governance’. We need to find a better word for ‘governance’ in its modern sense of regulation or management or maintenance than the notion of control.)

The first principle of democracy is equality. Whether you are man or woman, rich or poor, graduate or not, all of us are equal. Which essentially means there are no superiors like kings, queens and aristocrats, or inferiors like slaves and subjects in a democracy. That is why democracy is the height of human civilisation. It took us thousands of years of social and cognitive evolution to finally accept that we are all equal. There is nobody with divine power given by some god or any authority to rule over the people.

Then why do we treat the “people’s representatives” as our rulers? It is an obscene remnant of the social conditioning over thousands of years of our own monarchical history followed by the British rule and practiced to date through our hierarchical school system and public administration.

No man or woman should kneel before any people’s representative including the president, the prime minister, ministers, members of parliament, provincial council members, municipal council members or any elected representative. None of them are any bit greater than any other citizen of this country. They are liable to the people and that’s the only reason they’re given some constitutional privileges. Not because they are superior to others.

This is the core reason why we believe that an individual whether it is a president or a prime minister or some candidate will magically bring good governance, economic prosperity, and solutions to social-environmental problems. In a democracy it is a fallacy to believe that one person or a group of people are the saviours of the people. That’s called monarchy or oligarchy, but certainly not democracy. Only a well-designed democratic system can do so, not an individual by him or herself.

(I believe it’s a misnomer to call the President as “Janadhipathi” in Sinhala because it suggests a kind of a “ruler” of the people. Presidency is merely another tool of governance, ruled by the Constitution i.e. the people. We need a better name for presidency more in the line of “Sabhapathi”.)

3. We act and think as majority vs. minority

And democracy can only thrive in equality. If we see ourselves as, and act in the interests of our own gender, ethnic, religious, lingual, and political identities, we completely fail in democracy. Because that’s when representative democracy is turned into identity politics. In Sri Lanka there is not much difference between identity politics and party politics because the political parties simply abuse identities. In a democracy, it is counterproductive to have parties that act solely for the interest of a certain ethnic, religious or any group of people. In true democracy, all parties should represent all people.

Political parties in Sri Lanka are solely responsible for creating all ethnic, lingual and religious conflicts. It is the age old “ruling” technique – “divide and conquer”. That’s another reason why the people see certain individuals or parties as their god sent saviours. Instead of fighting for THE People, many of them fight for segments of people. Until the people of Sri Lanka denounce all divisive parties and their leaders, we will not be able to fully realise democracy.

4. We live in poverty

And by poverty, I mean both financial poverty and intellectual poverty, both of which are interdependent. When the people are poor, they become dependent. And dependency is the key to “ruling” anybody. The very first strategy of any invader throughout the history is to break the economy and take away the wealth and the ability to generate wealth.

In this celebratory week of independence, I believe it is appropriate to remember how the British “rulers” in the early 1800s destroyed the entire Uva-Wellassa region, which then powered most of the country. By the orders of the “Governor” Robert Brownrigg the British Army burned down the granaries, houses and paddy fields, and massacred the farmers and their children. That region is the most impoverished region to date.

The richest 1% banked 82% of the entire wealth created in the world last year (Oxfam 2017). That’s enough money to end global poverty seven times over! In Sri Lanka in 2016 the richest 10% enjoyed the same amount of income as the poorest 70% of the country’s people (DCSSL 2017). As I always say, “there is no such thing called poverty, only inequality”.

We need radical solutions to tackle the poverty issues. The Social Enterprise movement which we started a few years back is a pragmatic way to change the socio-economic system and future-proof it. But until Sri Lanka’s banking and finance, telecommunications, manufacturing and service sector giants truly understand the need for inclusive economic growth, we will continue to struggle in realising full democracy.

5. We use old, broken, corrupt systems

We need to innovate how we practice democracy in the 21st century. Democracy shines when the people are engaged with it every moment. We need to adopt new technologies to inform, discuss and debate about any and every matter that is of interest to the people. We already see such discussion and debates happen on social media. But we need to find ways to make those people’s opinions heard in real decision making.

The Liquid Democracy movement and the Sovereign Blockchain project is pioneering that innovation around the world. Liquid Democracy will give the “sovereign power” of the people back to the people. It will breakthrough so many psychological and physical systems of power. It will gradually remove all of the above challenges, even the artificial borders within countries and between countries. The eventual borderless world, the “Democracy Earth” is in the making. And it is time we start that journey in Sri Lanka.

We invite all interested people for a free and open discussion on Thursday 8 February starting at 6 p.m. at the Coffee Bean and Tea Leaf at the Orion City premises in Dematagoda (facing the Baseline Road). For more information please visit website www.chandaya.org or contact me on [email protected]

(The writer is a Social Entrepreneur and Ambassador for Democracy Earth.)

This article was first published in FT.