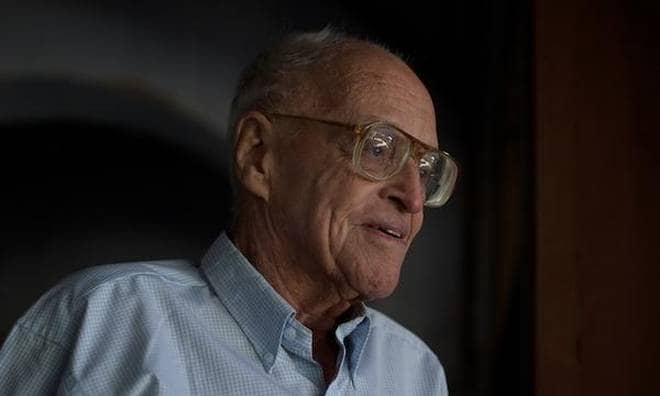 It was the year 1948, when young American Jesuit priest Father Benjamin Henry Miller, or Fr. Harry Miller as he was better known, arrived in Batticaloa. He spent the next seven decades here, teaching at a local boys’ school, serving as a priest in the Jesuit mission and living as a witness in the war-ravaged district that he had made his home. On January 1, 2019, he passed away at 93, after a lifetime of courageous work as a peace activist.

The island’s Tamil-majority Northern Province has remained in the spotlight for the numerous war-time atrocities it suffered, but the east — home to Tamils, Muslims and Sinhalese — has also had its share of massacres.

Batticaloa saw deadly attacks, murders and enforced disappearances intensify in the 1990s. As the founder-member of the Batticaloa Peace Committee, Fr. Miller diligently documented several thousand cases of missing persons, even as he tried reconciling the communities torn apart by years of war and mistrust.

A chronicler of testimonies

At a time when many religious leaders refrained from challenging either the armed forces that were on a rampage or the LTTE and other rebel groups that stifled any dissent, Fr. Miller felt the need to record testimonies of victims and their families, irrespective of who the perpetrator was.

In 1990, in one of the most gruesome incidents in the east, Army personnel allegedly assembled nearly 200 Tamil civilians, including children, from Sathurukondan and nearby villages in Batticaloa and summarily killed them. Fr. Miller’s Peace Committee recorded an eyewitness account from the only survivor of the massacre. While his testimony remains a crucial record of the atrocity, the wait for justice in the case is nearing three decades now.

Fr. Miller’s passing on New Year’s day brought to focus his untiring work in Batticaloa for 70 years, and the many distressing episodes he recorded during that time.

In the neighbouring Trincomalee district, the first week of the year remains traumatic for many. On January 2, 2006, five boys — all of them high school students — gathered near the Gandhi statue at the sea front, little knowing they would be shot dead. The killing of the students, who have since come to be known as the ‘Trinco five’, has often been described as an emblematic case of war crimes and the lack of accountability in Sri Lanka. Just as the young boys began their year, perhaps with dreams big and small, they were gunned down, reportedly by the Special Task Force personnel.

“It was a shocking case in which the state has operated with blatant impunity; its disregard for the rule of law has been offensive and insidious. Numerous exposes and statements by human rights agencies have been released on the subject that provide overwhelming evidence of state complicity, but as usual the case has stalled,” the University Teachers for Human Rights-Jaffna noted in one of its 2007 reports. The group of academics compiled elaborate evidence and information pertaining to the case, as it did for many crimes committed by the Army, the LTTE and the Indian Peace Keeping Force during the war years.

The ‘Trinco five’ case has not progressed much. Kasipillai Manoharan, the father of one of the students and a key witness, lives abroad following threats to his life in his hometown. While his fight for justice continues at international forums, the boys are remembered at Trincomalee’s beach front at the dawn of every new year.