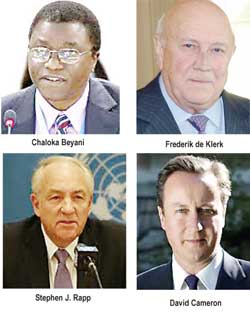 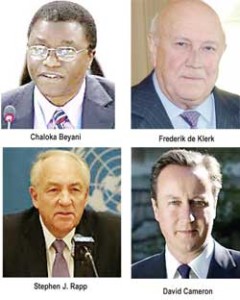 Stephen J. Rapp, Ambassador-at-Large of the Office of Global Criminal Justice of the United States will be in Sri Lanka this week.  He will be meeting with political leaders and also with other influential opinion formers to ascertain the situation in the country relevant to his interests and to make known his own views. His visit will be followed shortly thereafter by Assistant Secretary for South and Central Asian Affairs of the US government, Nisha Desai Biswal.  Both these visits are evidence of the international interest in Sri Lanka and its present trajectory of political development.  They are also likely to be connected to the forthcoming session of the UN Human Rights Council in Geneva in March, where Sri Lanka is likely to figure as an important issue and perhaps even as a test case for collective international action.

Due to the global influence the United States whatever its officials think and say is going to be of utmost importance to all of Sri Lanka, and not just to its government.  The views on Sri Lanka of the closest ally of the United States, which is the United Kingdom, are already well known.  British Prime Minister David Cameron has said that his government will use its place within the UN Human Rights Council to press for an international inquiry into the conduct of the last phase of Sri Lanka’s war.    When he was in Sri Lanka to attend the Commonwealth Heads of Government Meeting in November last year, the British Prime Minister gave the government an alternative of doing its own investigation in a credible manner.  But this has not been forthcoming as yet.

The ideal for Sri Lanka in the New Year is to have a government, opposition, civil society and international community that will address the problems faced by people and solve them without making them worse.  Among the many urgent problems that need resolution, the issue of accountability is particularly sensitive as it impacts upon the government leadership. Largely in deference to this international pressure, the government has taken some cases of human rights violations before the civil courts and appointed military tribunals to look into other allegations, but these have not yet yielded concrete outcomes.  The visiting US officials are likely to get this message from those whom they meet. So it will appear to them that there is a need for international action.

This international action that is being discussed is in a limited sphere, that of accountability, impunity and human rights violations.  But they are not the only issues of concern to the general population whose priorities also need to be considered.  There is a common concern about the rising cost of living and the inability to earn enough.  The government disputes this assessment and will be able to show national income statistics that bolster its claim that post-war Sri Lanka has entered into the ranks of middle income countries.   The government has been producing reports on its implementation of development projects and recovery of the war-affected parts of the country.  However, the UN Special Rapporteur on the Human Rights of Internally Displaced Persons, Chaloka Beyani, who visited Sri Lanka recently referred to “growing food insecurity and indebtedness in the Northern Province” and to the fact that “displaced and resettled communities seem to remain vulnerable to recurrent shocks”.

The contrast between reality and appearance is not limited to the economy.  Its presence is also felt in the political arena.  The seizure of more than 260 kilos of heroin, the involvement of the Prime Minister’s Office in the crime, and the disappearance of half of that weight of heroin while in police custody have been reported in the media, but the action taken appears to be minimal.  The 18th Amendment concentrated the powers of appointment of all top state bodies in the hands of the President.  Eroding the general public’s confidence in the integrity of state institutions, and the quality of presidential appointments, is the allegation that the Bribery Commission is itself tainted by bribery.  The independence and integrity of the public service has been laid low.

The forthcoming session of the UN Human Rights Council in Geneva in March can address these issues which are pressing to the people.   For this to happen there needs to be a continued focus on the implementation of the recommendations of the Lessons Learnt and Reconciliation Commission, as was mandated by its two resolutions of 2012 and 2013.  It deals very well with issues of governance and reconciliation.

But to the extent that the March 2014 session refocuses attention onto the single issue of setting up a new mechanism to ensure accountability there is danger of a diversion which will not be in the interests of improving conditions of life within Sri Lanka, as experienced by its people.    All indications are that the international community is positioning itself to deliver a resolution that calls for an international probe into Sri Lanka’s conduct of its war.

It seems that the international community has a standard response to post-conflict societies.  It is that they should deal with their past, and punish the guilty for crimes, before there can be reconciliation.  Therefore the international community insists on an investigation and accountability mechanism to be in place as a pre-condition for them to accept that a country has truly become a post-war society that is healing itself.   However, the reality stemming from this approach can be very different.  It can be used by desperate government leaders, who fear being punished, to divert popular attention away from issues of concern to the people to issues of national pride.  They can instigate nationalist groups, to take action against hapless minorities.   This has happened elsewhere in the world.  And so has the reverse, if there is great statesmanship—on all sides.

In 1994 prior to transferring power to South Africa’s first democratically elected government, President of South Africa Frederik de Klerk spoke words that could apply to Sri Lanka too.  ” There is a growing awareness among all South Africans of our interdependence – of the fact that none of us can flourish if we do not work together – that all of us will fail if we try to pursue narrow sectional interests.   Five years ago people would have seriously questioned the sanity of anyone who would have predicted that Mr. Mandela and I would be joint recipients of the 1993 Nobel Peace Prize. … In the conflicts of the past, there was no gain for anyone in our country. Through reconciliation all of us are now becoming winners.  The compromises we have reached demand sacrifices on all sides. It was not easy for the supporters of Mr. Mandela or mine to relinquish the ideals they had cherished for many decades. But we did it. And because we did it, there is hope.”

Twenty years later, in Sri Lanka, the multiple crises facing the country are all indicators of the need for a change in the way the country is governed.

In this situation, the need for change is manifest.  The better way for change, as demonstrated by South Africa, is to try and solve problems within the country with the external actors empowering the local actors to do so, including with the joint Nobel Peace Prize.  With the dawn of the New Year, there was a discussion in Ambalangoda in the southern Galle district on inter-religious amity.  The Ven. Baddegama Samitha, a well known peace activist and former Member of Parliament, and now a provincial councilor, summarized the situation in the country.  He said the country faced many challenges.  There was a need for change in governance.  The opposition was unable to bring about this change, and so the venerable Buddhist monk said it was necessary that the government itself should change from within.  So must the opposition, civil society and international community, like happened in South Africa
IS