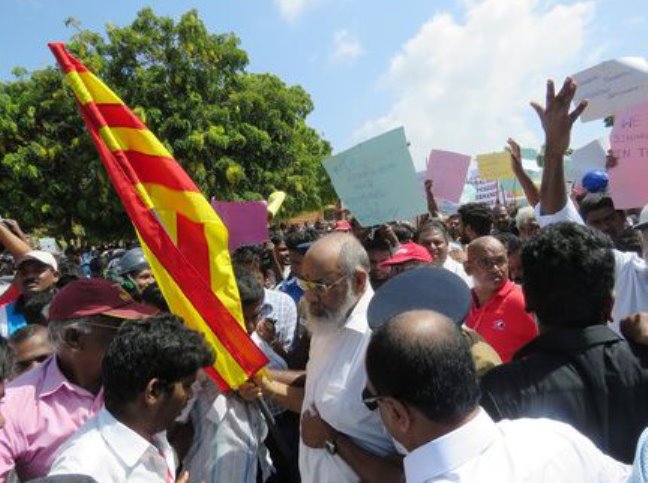 COLOMBO: The “Ezhuga Tamizh” rally and general strike which were organized in Sri Lanka’s Tamil-majority Northern Province on Saturday, represent a jockeying for power and position in Tamil nationalist politics rather than a genuine attempt to find a realistic and sustainable solution to the Tamil question, say independent observers of the North Sri Lankan political scene.

Scholarly and far sighted observers like writer Sivarasa Karunagaran and researchers Rajan Hoole and Ahilan Kadirgamar, fear that such attempts at mobilizing the Tamil masses on sensitive ethnic issues without thinking through the consequences, could take Sri Lanka back to the era of sharp and violent ethno-politics ,which as in the past, had only lead the Tamils to destruction sans any achievement.

The organizers of “Ezhuga Tamizh” the Tamil Peoples’ Council (TPC), had waxed eloquent about being a movement to being about the unity of Tamils cutting across party lines. But in reality, the TPC made no attempt to take into confidence the moderate Ilankai Tamil Arasu Katchi (ITAK), the main party in the Tamil National Alliance (TNA) which also has the largest number of Sri Lankan Tamil members in parliament and the Northern Provincial Council (NPC).

Although TPC’s co-chair and Chief Minister C.V.Wigneswaran said in his speech at the rally that the movement was not against the ITAK, few would take him seriously on this, given the on-going cold war between him and the leaders of the ITAK such as R.Sampanthan and M.A.Sumanthiran.

The line up on the “Ezhuga Tamizh” side clearly indicates that it is a group composed of parties and individuals opposed to the present leadership of the TNA and ITAK for one reason or the other. They want the ouster of Sampanthan and Sumanthiran. Some in the movement are moderate but others are extremist, trying to revive the uncompromising politics of the now defunct Liberation Tigers of Tamil Eelam (LTTE).

But the general tendency in North Tamil politics is towards extremism as was evident in the way the organizers kept out previously “pro-government” or “pro-Indian” parties like the Eelam Peoples’ Democratic Party (EPDP) led by Douglas Devananda, and the Tamil United Liberation Front (TULF) led by V.Anandasangaree. The EPDP wanted to join the bandwagon but kept away when it found that the list of supporters published by the organizers had omitted it. It held a rally of its own. V.Anandasangaree went to the venue without an invitation but walked out because he was not allowed to mount the dais.

Although Wigneswaran said that the “Ezhuga Tamizh” is only meant to support the elected Tamil MPs in their fight for the Tamil cause, critics wonder how presenting the demands using only ethnic phraseology and through aggressive mass mobilization would help the elected representatives negotiate a sustainable deal with the government which is dependent on the votes of the majority Sinhalese community.

The fear that the now accommodative Sirisena government and its liberal Sinhalese supporters will clam up if pushed to a corner is haunting the moderate Tamils like writer Sivarasa Karunagaran.

Ahilan Kadirgamar recalls how in the past the adoption of similar techniques had led to the Tamils’ defeat every time.

“Extremist slogans are seductive but are also destructive. From the earliest phase of the Tamil movement, seductive slogans have been made without thinking through the consequences,” he said.

“The mobilization of university students is fraught with dangerous consequences” warns Dr.Rajan Hoole.

He wondered how the Vice Chancellor allowed student mobilization for the extremist “Ezhga Tamizh” rally in the campus when she had disallowed a meeting to commemorate the human rights worker Dr.Rajini Thiranagama.

It is said that a section of the Tamil Diaspora linked to the now defunct LTTE may be funding some individuals in the “Ezhuga Tamizh” movement .But impartial observers say that raising extremist slogans and demands has been part and parcel of Tamil politics for decades and is done despite a repeated failure to deliver the goods.

“The demands made at the ‘Ezhuga Tamizh’ are not new but what is worrying is the mass mobilization that is being sought to be done on the basis of extremism. That is very worrying,” Kadirgamar said.