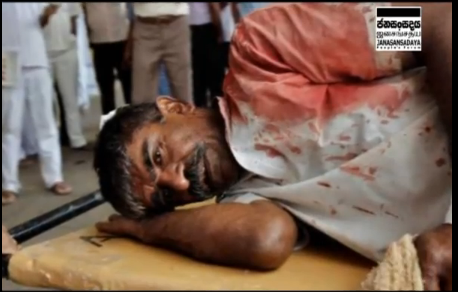 Jayantha Sri Nissanka
More and more incriminating evidence of summary executions of inmates in the Welikada Prison by the Police Special Task Force (STF) and a special police unit (SPU) that took place after the army commandos took full control of the prison on the night of November 9 have now been revealed, despite an officially sanctioned cover up of the massacre.

Our lead story last week reported that both prison officers and jailors had said how inmates were called out from their cells by the Special Task Force officers who arrived in the Prison after the army commandos took control of the premises. The prisoners who were called out were summarily executed, with the last victim being killed at 6 am on Saturday (November 10).

Our subsequent investigations into the incident and telephone conversations with prisoners who were witnesses to the massacre reveal an extremely disturbing picture. It also reveals a cover up of the massacre that has been carried out by prison officials, apparently with the connivance of the top echelons of power.

One inmate, an eyewitness, whose name could not be disclosed due to obvious reasons told this newspaper that after the riot was controlled, police officers attached to the Dematagoda and Peliyagoda Police Stations called names of some inmates and took them out of their cells, and executed them.

He said only 16 inmates were killed due to the riot, while 11 others were subsequently executed by the officers.

He said: “At around 1.30 am (Saturday), an armoured car stormed the prison building through the main gate and a group of commandos alighted, while opening fire. They then cleared the cells. After that they ordered us to sit down and took photos of the inmates in groups. This process took around 10 minutes. Thereafter, we were put back into the cells along with the corpses of the 16 prisoners who were killed earlier in the fire fight with the STF. By this time there was no any aggression inside the cells and order had been restored. The commandos then left the cells.

Shortly after, police squads from Peliyagoda and Dematagoda arrived.

They ordered us to sit in our cells. They then read names from a list and asked those whose names were mentioned to stand up. Eleven prisoners stood up and were told to go with them. They were also assigned various jobs but we knew something was afoot, given that it was the early hours of the day. Within minutes we heard gunshots and we knew they had been executed. We heard some of the inmates screaming not to shoot, and then we heard gun shots.

Some others whose names were called by the police officers did not stand up and they escaped being executed as a result.

We realised that the police were planning to get rid of some inmates, and they did so under the pretext of the riot. Some were hardcore criminals and the police may have feared reprisals due to their connections with the underworld.One of those inmates killed was Kalu Thushara; he had carried out several mass robberies. He allegedly sold drugs while being in prison.

“The police and STF also looked for some other prisoners in their kill list, but they clearly lacked time on their hands as it was almost morning. They also called out Mole Chaminda and Shiyam. ‘Ward Place’ Shiyam was convicted to life imprisonment for possessing 40 kg of heroin.

Sources said that these two prisoners had been transferred to the Mahara Prison the previous day. Another inmate, Dolphin Chandana’s life was spared but he was mercilessly assaulted. The police killed all 11 inmates within 10 minutes. Such was the swiftness with which they carried out the executions. We also heard the inmates screaming.

They were executed about 100 metres away from where we stood.”

How it had started…

Referring to how the clash began, the inmate said: “On Friday, STF officers conducted a raid at the ‘L’ Ward. Then they wanted check four other prison cells situated at the Chapel Ward where hardcore inmates were housed. On entering the Welikada Prison from the main gate, on the left corner is the ‘L’ Ward. The Chapel Ward is situated at the right corner. The STF officers entered the prison premises, heavily armed. I saw them crashing straight into the ‘L’ Ward.

We were in the middle ward, between the ‘L’ and the Chapel Ward and I could clearly see what was happening. The STF officers then pulled out inmates from the remand section before they were handcuffed. Then the inmates were asked to lie on the ground before they went on to check the cells. Within a few minutes they had finished inspecting the ward and the STF officers came out. After that all the inmates – about 900-1000 were locked in the building. Then the STF officers were seen heading towards the Chapel building.

There are four special prison cells in the lower floor of the Chapel building. There, they took out one inmate, Marlon Pelpola, the former husband of film actress Anusha Sonali. STF officers verbally abused Marlon and when he retorted, they beat him up. It was that situation which flared up into a riot.”

When other prisoners who were on assigned day labour inside the Prison saw this, they all ran towards the Chapel Ward.”

“As the prisoner started shouting, the STF fired tear gas at the four special prison cells at the Chapel building. The inmates threw some tear gas canisters at the STF, and the officers ran out. Then they started to fire tear gas inside the Prison, regularly, every five minutes, and they did so on purpose, to kill all the prisoners. The inmates lost their mental faculties. It was impossible to breathe due to the continuous tear gassing,” he related.

“The inmates by now were seething with anger and hatred, and we wanted to demolish the building and get out of this even at the loss of our lives. Such was the predicament faced by the Welikada inmates at the hands of these STF officers,” he said.

“The inmates then started throwing tear gas canisters and stones at the STF. This lasted for about two hours. It was while hurling stones that some of our colleagues managed to get onto the roof of the Prison. However, what cannot be condoned is the breaking of the armoury. But since the situation was turning grave, they had no other alternative but to break open the ammunition store and arm themselves so as to protect themselves from the inevitable onslaught by the STF.

They first brought weapons but without any bullets or cartridges. Later, they were able to get hold of firearms,” he explained.

“During the incident, the inmates who were in a frenzy, were also behaving in a crazy manner; they even broke into the pharmacy and pillaged all the drugs. After they managed to get hold of bullets, the inmates and the STF engaged in a shootout, with no quarter asked, and none given. At the time, there were only around four Prison officials on duty and they too were helpless, and the Welikada Prison was virtually controlled by the inmates who were exchanging gunfire with the STF. After a while, the firing from the outside stopped.

Then I managed to reign in the rest of our colleagues to our section of the ward,” the inmate revealed.

“However, by that time one inmate, Lester was shot. He (Lester) was not an underworld figure but was imprisoned after he had killed a person during a robbery. By now it was around of 1.30 am, and the army commandos entered the Prison in an armoured car. They cleared the cells and left. Thereafter, police from the Peliyagoda and Dematagoda Police Stations arrived and the massacre commenced,” he said.