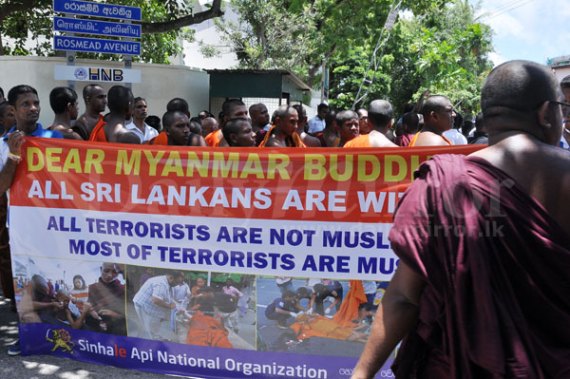 (newsin.asia): A small group of Buddhist monks belonging to an extremist Sri Lankan nationalist organization on Tuesday attacked houses of Rohingya Muslim refugees in the outskirts of the capital, forcing the police to arrest the “illegal immigrants”.

The 31 refugees, including women and children, were sent away to the detention camp at Boosa in South Sri Lanka, because the Migrants’’ Detention Center at Mirihana near Colombo, was full, reliable reports said.

A police official said the refugees were taken into “protective custody” and had been brought back to their safe house when the mob returned and started pelting stones.

“We have pushed back the mob and the refugees will be relocated in a safer place,” the AFP quoted the unnamed police official as saying.

A monk, who stormed the walled mutli-storey compound, was filmed by his radical Sinhale Jathika Balamuluwa or Sinhalese National Force, according to AFP.

He was urging others to join him in smashing the premises.

“These are Rohingya terrorists who killed Buddhist monks in Myanmar,” he said in his live commentary on Facebook

The office of the UN High Commissioner for Refugees (UNHCR), the cooperation of which was sought, was assured that the sojourn of the refugees in Boosa, primarily meant for terror suspects, would only be temporary. The UNHCR accepted the arrangement, sources said.

The government and the UNHCR are working together to ensure the refugees’ “safety” and that the Detention Center is in “good condition,” reliable sources said.

The UNHCR has called for a meeting with stakeholders in the government. The meeting could take place either on Wednesday or Thursday. The diplomatic community in Colombo will also be briefed about the action taken.

In May this year, 32 Rohingyas, including women and children, were rescued off Kankesanthurai in the northern district of Jaffna by the Sri Lankan Navy and detained. They had been transported by two Indian nationals.

The refugees were living in Mount Lavinia about 10 km south of Colombo with the assistance of the UNHCR.

This month, Muslim MPs and organizations asked the government to accept Rohingyas fleeing from a fresh round of violence in Rakhine State in North Western Myanmar.

But Prime Minister Ranil Wickremesinghe categorically stated that government has no intention whatsoever of allowing them in as they would be “illegal” immigrants.

He said that no foreigner can be allowed to enter Sri Lanka except with a valid visa. And since the Rohingyas are moving in groups, there are obviously racketeers involved in the movement. The government cannot encourage that, the Prime Minister said.

One of the first steps that the Sri Lankan government took when the present troubles in Myanmar started on August 25, was to deny visas to Myanmar citizens.

On September 18, a group of seven monks from Myanmar were refused visas at the Colombo airport. The Sri Lankan embassy in Yangon has been instructed to issue visas only to Myanmar’s officials. Others would have to go through a thorough screening.

Tuesday’s attack by Buddhist monks did not take observers by surprise as there were demonstrations against the Rohingya Muslims in the recent past after it was suspected that government might accommodate them on humanitarian grounds giving them refugee status.

Buddhist radical organizations have expressed opposition to allowing the Rohingyas in, on the grounds that they are foreign Muslims and “radicalized” at that.

“ Having had a conflict with the Buddhists in Myanmar, they will have hatred in their hearts for Buddhists in Sri Lanka. This will create a communal conflict here,” said Opposition Member of Parliament, Udaya Prabhath Gammanpila of the Pivithuru Hela Urumaya.