Exploiting The Dead To Build Image by Rajapaksa

President Maithripala Sirisena and Prime Minister Ranil Wickremesinghe’s exposé during the second reading of the budget in parliament early this month as to how Kurunegala District MP, former President Mahinda Rajapaksa had allegedly exploited even the dead to misuse public monies during his tenure as the country’s executive president has further revealed the extent to which state funds had allegedly been misused.

The Sunday Leader’s expose this week is written with the best interest of the general public to show how highly placed officials during the former regime had allegedly looted tax payers hard earned money.

According to Prime Minister Ranil Wickremesinghe, Rajapaksa had allegedly ‘spent’ Rs.15 million during the year 2014 for funeral wreaths while President Maithripala Sirisena has spent only Rs.363,000 during 2015 for the same purpose. According to details this newspaper is in possession, there were instances where funeral wreaths had been sent even to Nuwara Eliya from Colombo spending several thousands of rupees as transport charges and overtime payments in addition to the cost of the funeral wreath.

A senior official at the Presidential Secretariat on condition of anonymity said that she cannot believe whether these wreaths had actually been sent from Colombo, claiming that the flowers would have got withered by  the time it reached the far away destination.

“Unless these wreaths were made out of artificial flowers, fresh flowers would have got withered by the time they reached Nuwara Eliya. Taking a wreath all the way from Colombo to Nuwara Eliya is a waste of money and cheaper to buy from a florist in that area,” sources added. 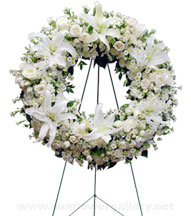 It is learnt that the incumbent President Sirisena had given strict instructions to his staff that, in future contracts cannot be given to any florist to supply funeral wreaths to funeral houses on behalf of the President.

“Although the previous regime gave this contract only to two florists, President Sirisena told his staff that he does not want to give any contract to any florist nor to send the funeral wreath to the funeral house in a hired vehicle spending colossal amounts of public money. Hence he instructed the relevant officers to inform all District Secretaries/ Government Agents in the country to send funeral wreaths to funeral houses in their respective areas if instructions are given from the Presidential Secretariat. In a letter dated June 22, 2015 by President’s Additional Secretary Rohana Keerthi Dissanayake on behalf of President’s Secretary P. B. Abeykoon issued a circular to all District Secretaries/Government Agents in the country, that if instructions are given from the President’s office, the respective District Secretary has to offer the floral tribute to the dead on behalf of the President and the bill to be sent to the President’s Secretary for reimbursement.

The letter further states as thus, “In an event where floral tributes has to be sent for funeral houses on behalf of the President, the District Secretary of the particular administrative district has to place the wreath on behalf of the President. Hence in future, once instructions are received from the President’s office, the particular District Secretary has to pay the floral tribute made with fresh flowers and it should be more than four and a half feet in height. The bill has to be submitted to the President’s Secretary for reimbursement”.

According to the bill numbers of these two florists, all bills in their bill books had been issued only to the Presidential Secretariat but not to any other party.

“If that is the case then Jayaratne and Rayland florists may have got orders only from the President’s Office not from anyone else if not they seems to have maintained separate bill books for the Presidential Secretariat orders as all the bill numbers are clearly in order,” sources alleged.

“This clearly shows that Jayaratne florists have haphazardly written the bills may be after the fall of the previous regime without even assuming that questions would be raised about the bill numbers,” sources claimed.

Although the standard cost of a Jayaratne floral wreath was Rs.1,500, there were few instances where expensive wreaths which had cost Rs.6,000 and Rs.5,000 had been dispatched – all to funeral houses at Medamulana which was Rajapaksa’s constituency.

“When going through the Jayaratne bill details other than for a few, most of the funeral wreaths had been sent to Kandy, Bandarawela, Nittambuwa, Avissawella, Anamaduwa, Galaha, Galle, Devinuwara, Hanguranketha, Kurunegala, Polonnaruwa, Deniyaya, Aluthgama, Rambukkana, Hakmana, Ratnapura, Walasmulla, Kegalle, Monaragala, Matale and Trincomalee.

In addition to the cost of the wreath, how much of money the presidential secretariat had spent on transport and overtime to dispatch the wreaths? Why couldn’t they send these wreaths from a florist closer to the funeral houses and save millions of rupees of public money,” sources added.

It was the same with Rayland Florists, Matara where  not a single day has passed without a wreath being placed  in December 2014, on behalf of the then President Mahinda Rajapaksa. Refuting the allegations, Chairman Jayaratne Florists, Upali Jayaratne said that not only Mahinda Rajapaksa but also former President Chandrika Kumaranatunge had purchased funeral wreaths from them.

“This is not a big issue for us as consecutive Heads of Government had bought funeral wreaths from us. Although we have supplied funeral wreaths to the former President’s request we were not paid for the months of October, November and December,” Jayaratne said.

When asked whether former President Chandrika Kumaratunge too bought funeral wreaths every day like her successor Mahinda Rajapaksa, Upali Jayaratne was unable to give a proper answer.

In regard to the issuance of bills without an order which is a clear indication of a serious irregularity, Upali Jayaratne while dismissing the allegation said that his staff may have used various bill books to issue the bills. “My staff may have not taken the bill books in order but may have taken it unsystematically. Other than that there isn’t any scam into our billing system,” Jayaratne said.

When contacted Manager Rayland Florist, Samantha said that they have been supplying funeral wreaths to the Presidential Secretariat over the past 10 years.

According to Samantha, it was either the President’s Office in Colombo or Murthi Kodithuwakku from the Weeraketiya office that gave orders and had charged Rs.1,750 to deliver the funeral wreath to Weeraketiya.