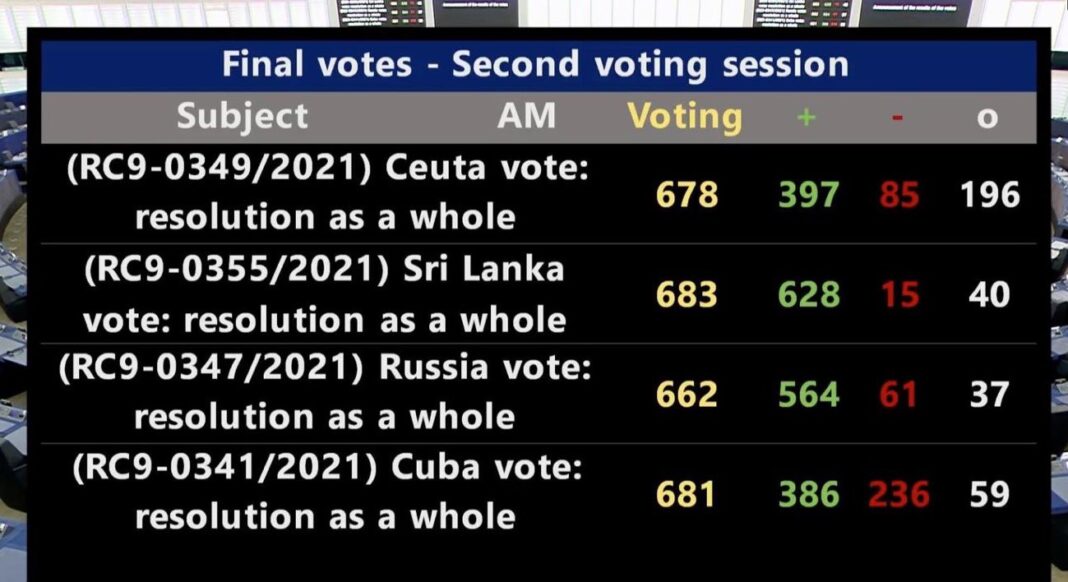 European Parliament today (10 June 2021) passed a resolution on the situation of Sri Lanka which calls on the European Commission and the EEAS to use the GSP+ as a leverage to push for advancement on Sri Lanka’s human rights obligations and demand the repeal or replacement of the PTA, to carefully assess whether there is sufficient reason, as a last resort, to initiate a procedure for the temporary  withdrawal of Sri Lanka’s GSP+ status and the benefits that come with it, and to report to Parliament on this matter as soon as possible.

The resolution in full:

The situation in Sri Lanka, in particular the arrests under the Prevention of
Terrorism Act

European Parliament resolution of 10 June 2021 on the situation in Sri Lanka, in particular the arrests under the Prevention of Terrorism Act (2021/2748(RSP))

A. whereas Sri Lanka has been marred by a decades-long civil war which ended in 2009,
during which serious human rights violations were committed by both sides;

B. whereas the human rights situation in Sri Lanka has been steadily deteriorating, with the new government rapidly backtracking on the limited progress achieved under previous
administrations; whereas the space in which civil society and an independent media can
operate in the country is rapidly shrinking;

C. whereas the controversial Prevention of Terrorism Act (PTA) has been in place in Sri
Lanka since 1979 and grants the police broad powers to search, arrest and detain civilian
suspects; whereas the wide-ranging powers provided for in the PTA have led to consistent
and well-founded allegations of torture and sexual abuse, forced confessions and
systematic denials of due process;

D. whereas in her most recent report on Sri Lanka, the UN High Commissioner for Human
Rights reiterated the calls for a moratorium on the use of the PTA for new arrests until it is
replaced by legislation that adheres to international best practices;

E. whereas the Government of Sri Lanka issued Regulations No. 01 of 2021 on 9 March
2021, expanding the PTA and, inter alia, allowing for two years of detention without trial
for causing ‘religious, racial, or communal disharmony’;

F. whereas the PTA has been systematically used for arbitrary arrests and the detention of
Muslims and minority groups in Sri Lanka, including Ahnaf Jazeem, a 26-year-old
Muslim teacher and poet, and Hejaaz Hizbullah, a well-known lawyer for minority rights
and the rule of law;

G. whereas on 19 May 2017 Sri Lanka regained access to generous tariff preferences under
the GSP+, on the condition that it replaces its PTA and effectively implements 27
international conventions, including human rights conventions; whereas the European
Union has repeatedly expressed concern over the PTA and noted Sri Lanka’s failure to
repeal the act despite its commitment to doing so;

H. whereas on 20 October 2020 the Sri Lankan Parliament passed the 20th Amendment to
the Constitution, reinforcing the executive presidency;

I. whereas nearly 12 years on from the end of the war, domestic initiatives for accountability and reconciliation have repeatedly failed to produce results, thus more deeply entrenching impunity and exacerbating victims’ distrust in the system;

J. whereas there are clear signs of the accelerating militarisation of civilian government
functions in Sri Lanka; whereas since 2020, at least 28 serving or former military and
intelligence personnel were appointed to key administrative posts; whereas those
appointments include at least two senior military officials who were implicated in UN
reports in alleged war crimes and crimes against humanity during the final years of the
conflict; whereas many suspects in police custody as well as inmates in Sri Lankan prison
complexes have been killed; whereas the most recent cases include deaths in police
custody in May 2021; whereas 11 inmates at Mahara prison were killed and 117 others
injured when guards opened fire to control a riot over COVID-19 conditions in November
2020;

K. whereas authorities in Sri Lanka handed down capital punishment sentences for drugrelated offences in 2019, despite the existence of a moratorium on the use of capital
punishment in the country since 1976;

1. Expresses deep concern over Sri Lanka’s alarming path towards the recurrence of grave
human rights violations as described by the most recent UN report on the country, which
lists among the early warning signs the accelerating militarisation of civilian
governmental functions, the reversal of important constitutional safeguards, political
obstruction of accountability, exclusionary rhetoric, intimidation of civil society, and the
use of anti-terrorism laws;

2. Reiterates its strong opposition to the continued application of the current PTA; calls on
the Sri Lankan authorities to fulfil their pledge to review and repeal the act and replace it
with anti-terrorism legislation which adheres to international best practices; further calls
for the immediate suspension of the deradicalisation regulations;

3. Points out that Regulations No. 01 of 2021 do not provide for procedural guarantees for
any person deprived of their liberty as laid down in Article 9 of the International Covenant
on Civil and Political Rights, and that they violate Sri Lanka’s own constitutional
guarantees under Article 13 of the Sri Lankan Constitution; recalls that deradicalisation,
rehabilitation and reintegration centres, which are regulated under similar legislation, have
in the past been rife with serious human rights violations such as torture and other illtreatment, including sexual and gender-based violence;

4. Expresses grave concern about the arbitrary arrests and detention under the PTA without due process and access to justice, including for civil society activists, lawyers, writers and poets such as Hejaaz Hizbullah and Ahnaf Jazeem; notes with concern the detention of Shani Abeysekara, the former director of the Criminal Investigation Department; urges the Government of Sri Lanka to immediately give those detained a fair trial on valid charges and, if there are no charges, to release them unconditionally;

5. Deplores the continuing discrimination against and violence towards religious and ethnic
minorities and communities in Sri Lanka, including Muslims, Hindus, Tamils and
Christians; calls on the Government of Sri Lanka to unequivocally condemn hate speech,
incitement to violence and discrimination against religious and ethnic groups in the
country, and to hold to account those who advance such divisions, including within the
government and military;

6. Notes the adoption of the 20th Amendment to the Constitution and expresses serious
concern about the resulting decline in judiciary independence, the reduction of
parliamentary control, and the excessive accumulation of power with the presidency;

7. Notes with concern the Government of Sri Lanka’s recent proposal to enact a new law on
disinformation despite concerns raised by civil society organisations about the threats such
a law could pose to the freedom of expression; urges online platforms to take proactive
steps to moderate the circulation of hate speech and disinformation online in the Sinhalese
and Tamil languages;

8. Is concerned that provisions in Sri Lanka’s Penal Code, notably sections 365, 365A and
399, have been interpreted in such a way as to criminalise individuals with diverse sexual
orientations and gender identities;

9. Calls on the Commission to urgently evaluate its funding for the UN Office on Drugs and
Crime and INTERPOL project ‘Support to Sri Lanka on Counter-Terrorism’ while
counterterrorism in Sri Lanka is in certain cases being used as a pretext on which to
persecute members of ethnic and religious groups and civil society, including human
rights defenders; calls on the EU Delegation to Sri Lanka and the Member States’
representations to increase their support to civil society, especially human rights
defenders, environmental defenders and journalists;

10. Underlines the crucial importance of ensuring that the national reconciliation process is
given the necessary attention and results in concrete actions, including accountability for
enforced disappearances and past crimes; regrets Sri Lanka’s withdrawal from the
commitments it made to the UN Human Rights Council in the context of its sponsorship
of resolution of 14 October 2015 entitled ‘Promoting reconciliation, accountability and
human rights in Sri Lanka’, and encourages it to re-engage with the council, which is
instrumental in restoring relations with the international community and creating a process
of national reconciliation between the diverse Sinhalese, Tamil, Muslim, Hindu and
Christian communities;

11. Calls on the Government of Sri Lanka to prevent any hindrance of the investigation and
possible prosecution of members of the security forces accused of serious human rights
abuses; insists that an investigation be carried out into allegations of grave human rights
abuses and war crimes committed during the civil war by senior figures from all sides;
asks the Government of Sri Lanka to end the practice of appointing current and former
military commanders implicated in serious abuses to senior government positions;

12. Calls for a rigorous, impartial and complete investigation into the 2019 Easter Sunday bombings in line with international legal standards; calls, furthermore, for those against whom there is evidence of culpability to promptly be brought to trial, and for those for whom there is insufficient evidence to be released;

13. Recalls that the GSP+ scheme offers the incentive of better access to the EU market for
the country’s exporters, in return for further progress in fully implementing those
conventions; recalls that one of Sri Lanka’s key commitments was to fully align its
counterterrorism legislation with international human rights conventions in order to secure
a favourable trading relationship under the GSP+; recalls the consequences foreseen in the
GSP Regulation1 in the event of a persistent failure to adopt and enact the necessary
human rights reforms, repeal abusive legislation and reverse the current trajectory of
increasing violations;

14. Underlines that the GSP+ scheme offered to Sri Lanka has made a significant contribution to the country’s economy, from which exports to the EU have increased to EUR 2.3 billion, making the EU Sri Lanka’s second-largest export market; highlights the ongoing
monitoring of Sri Lanka’s eligibility for GSP+ status and stresses that the continuance of
GSP+ trade preferences is not automatic; calls on the Commission and the European
External Action Service (EEAS) to take into due account current events when assessing
Sri Lanka’s eligibility for GSP+ status; further calls on the Commission and the EEAS to
use the GSP+ as a leverage to push for advancement on Sri Lanka’s human rights
obligations and demand the repeal or replacement of the PTA, to carefully assess whether
there is sufficient reason, as a last resort, to initiate a procedure for the temporary
withdrawal of Sri Lanka’s GSP+ status and the benefits that come with it, and to report to Parliament on this matter as soon as possible;

15. Notes with concern the impact of the COVID-19 pandemic on the deteriorating labour rights’ situation in the country; urges Sri Lanka to cooperate fully with the International Labour Organization (ILO) to strengthen the labour rights of factory workers, including health and safety conditions for garment workers in special trade zones; calls on the Government of Sri Lanka to effectively implement and strengthen the National Policy on
Elimination of Child Labour; calls on the Sri Lankan authorities to adapt the Board of
Investment of Sri Lanka Labour Standard and Employment Relation Manual in order to
bring it in line with international standards, notably ILO Convention Nos 87 and 98;

16. Reiterates the European Union’s strong opposition to the death penalty, in all cases and
without exception; welcomes Sri Lanka’s continued moratorium on the death penalty;
urges the government to abolish the use of capital punishment in the country;

17. Welcomes the EU’s past support for reconciliation efforts and underscores the EU’s
readiness to support Sri Lanka in this field;

18. Expresses concern about the growing role and interference of China in Sri Lanka;