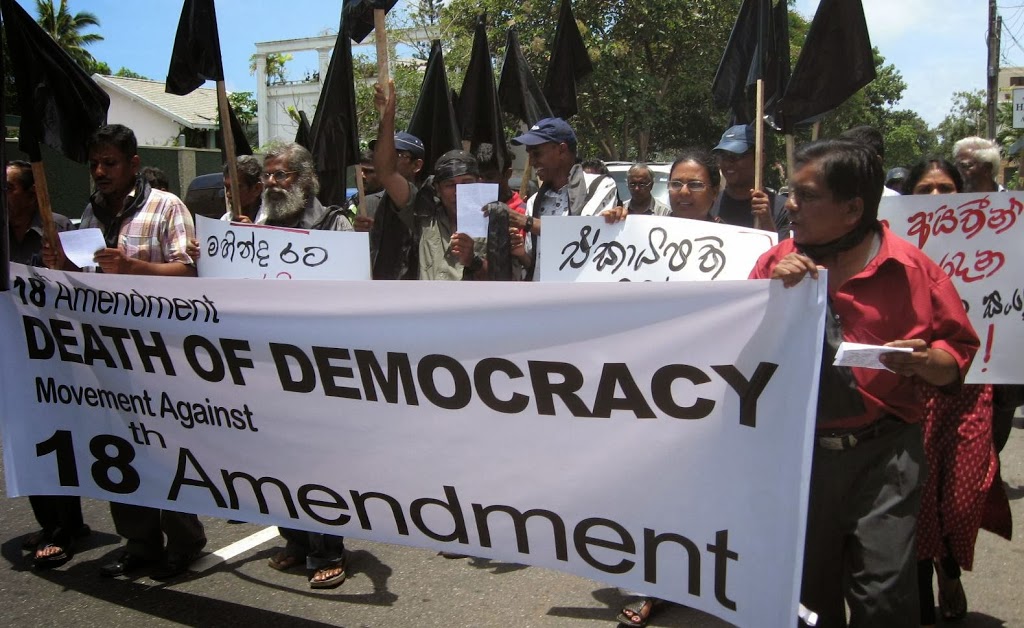 Despite the failure of the Lessons Learnt and Reconciliation Commission (LLRC) to deal adequately with issues of accountability, civil society broadly agreed to cooperate with the Sri Lankan government in the implementation of the main LLRC recommendations. However, the government has not engaged in meaningful dialogue with civil society, opposition political parties and the international community in the implementation of LLRC recommendations. Moreover, the National Action Plan (NAP) conceived by the Sri Lankan government in July 2012 for this purpose, glosses over the most important issues of the LLRC, diluting its recommendations, considerably.

In our opinion, the Sri Lankan government continues to procrastinate over the implementation of key LLRC recommendations and instead, showcases ostensible progress on the NAP. The latter totally ignores the call for the setting up of an effective national mechanism to address accountability issues. Accordingly, we affirm the reports released by prominent Sri Lankan think tanks and civil society organisations such as the Centre for Policy Alternatives, which highlight the failure and shortcoming of the Sri Lankan government in the implementation of the LLRC recommendations.

We welcome the first ever election of the Northern Provincial Council in September 2013, made possible also due to international pressure on the Sri Lankan government. The people in the North demonstrated, with an overwhelming majority, their dissatisfaction with the failure of the Sri Lankan government to address their aspirations and grievances more than four years after the end of war. The election was more than a provincial poll: it was effectively a referendum on the recognition of the Tamil people’s right to self determination, accountability for violations of human rights and humanitarian law and all other internationally recognized human rights. We consider this vote a stinging rebuke delivered by the people of the North, through the democratic process, to the government’s claims about its implementation of LLRC recommendations.

We also refer to joint statements made by Sri Lankan non-governmental organizations’ at the Universal Periodic Reviews, the Civil Society memorandum submitted to the High Commissioner for Human Rights, Navi Pillai, during her visit to Sri Lanka in August 2013, and the Civil Society statement issued during the Commonwealth Heads of Government Meeting (CHOGM) held in November 2013.

We bring to your attention the rise in religious extremism and the clear and present danger of further polarization between the peoples of our country. Over the past two years a hate-campaign against the Muslim community has been intensified. It includes attacks against Muslim places of worship and retail outlets, anti- Muslim propaganda and calls to boycott Muslim businesses. The National Christian Evangelical Alliance of Sri Lanka, which represents over 200 indigenous churches in the country, has also expressed serious concerns over the sudden escalation of violence against Christian communities. The authorities have yet to take action to arrest the culprits and condemn this violence, where the reported cases are more than 300 in 2013 alone. Their unwillingness to intervene is one indication of the abysmal failure of post-war reconciliation. In this context, the determined “Sinhalisation” process in the North that is radically altering the Hindu character of the landscape with Buddhist temples and Buddha statues in strategic public locations is also of serious concern.

Though the war ended five years ago, the sense of vulnerability of the different ethnic communities remains high.

Despite a flurry of government claims that the presence of the military in the North and East have been reduced, reports from the ground confirm that the Army is still engaged in civil affairs and retains an overwhelming presence in the Tamil-majority provinces. The Presidential Task Force (PTF) and the Governor continue to overlook all humanitarian and development interventions in the North despite the election of the Northern Provincial Council and the appointment of the new Chief Minister at the end of September 2013. Reports from civil society activists and human rights defenders also attest to the expansion of military camps without any compensation or restitution for the land expropriated. Overall, land and property expropriation remains a central issue and a potential trigger of instability in the North.

In addition to land issues in the North, the massive presence of the Army continues to heavily impact civilian life on a daily basis. Several field reports confirm the number of continuing human rights violations taking place daily in the Jaffna peninsula and in Kilinochchi and Mullaitthivu districts in particular. The violations range from arbitrary arrests to military occupation of public buildings, searching of houses at night, deprivation of livelihoods and limitations on the freedom of movement. Particularly worrying are the reports of growing insecurity , sexual violations and vulnerability of women living in the North. The presence of the military has compounded issues of protection and security of women and girl children. In particular, the prevailing surveillance culture coupled with a fear psychosis prevents women from making complaints related to sexual harassment, violence and rape. The LLRC recommendations 9.86 to 9.100 states that; “ there is a large number of such women (over 59,000 according to the Government sources) in the country in the aftermath of the conflict, the Commission recognizes the welfare of these women and the women-headed households as a major post-conflict challenge that needs to be addressed as a matter of priority by the Government and all other stakeholders, in a collective effort towards reconciliation.”

We are concerned that the authorities have failed to address the increased gender -based violence in the post-war context.

The increasing authoritarianism of the government is also attested to by the increase in the systematic repression and harassment of political critics, human rights defenders and NGO activism, employing the military and draconian provisions of the law. Student activities in the north and south of the country, too, are being repressed in this manner.

The culture of impunity extends to the media. A sense of insecurity in the media persists largely due to government inaction, even after complaints of threats to and intimidation of media actors, have been made. This has both nurtured and exacerbated the degree of self-censorship within mainstream media, and has, as a result, led to the preclusion of critical reportage on post-war cases of human rights violations, corruption and governance issues. The government also continues to stall on enacting right to information legislation – a key LLRC recommendation on governance.

Constructive recommendations by civil society and critical engagement with it for the establishment of effective, national mechanisms in compliance with international obligations, has been continually ignored by the Sri Lankan government. On account of our engagement with the United Nations system we have been publicly labeled as ‘traitors’ and ‘separatists’ by state actors and state media, thereby fostering a climate of hate and violence against HRD’s. This was amply demonstrated during HRC 21. It should be noted too that the NGO secretariat remains under the control of the Ministry of Defense.

The attitude and objectives of the government are abundantly clear in the lackadaisical treatment of the national human rights mechanism. The term of the current members of the Human Rights Commission of Sri Lanka (HRCSL) ended on the 18th of February 2014 and the same members have been re-appointed on the 18th February itself by the President. The Petitioners who were called for inquiries on the 18th of February, were informed by the Chairman of the HRCSL that inquiries are being cancelled due to unavoidable circumstances. Even the reappointment of commissioners has been done under a highly centralized and politicized system, following the 18th Amendment to the Constitution which did away with the provisions for independent oversight provided under the 17th Amendment.

Just ahead of the visit of the High Commissioner Navi Pillay last August, the Sri Lankan government widely publicized the appointment of a new ‘Presidential Commission to Investigate into Complaints on Missing Persons’ with a mandate of six months to look into the disappearances’ cases from the Northern and the Eastern provinces during the period 1990-2009. Reportedly, the Commission has received about 16’000 complaints so far. At the beginning of 2014 the Commission held its first two rounds of hearings for the family members’ of the disappeared persons in the Kilinochchi and Jaffna districts, displaying an evident lack of preparation, resources, and knowledge of international standards. In addition there was the constant interference of the security services to dissuade families from testifying before the commissioners. Whilst the Commission was sitting, reports from Kilinochchi confirmed that dozens of families were visited in their homes by officials claiming to represent the Commission. These officials requested and recorded the personal information of their disappearances’ cases and proposed that family members accept death certificates and financial compensation, resulting in the closure of their cases and in families foregoing the opportunity to submit cases to the Commission for investigation.

The establishment of credible national mechanisms to address the needs of families of the forcibly disappeared, missing, those who have disappeared after surrendering and those who are unaccounted for after being taken into custody by the security forces, the police and paramilitary organizations, would have built confidence in the Sri Lankan government’s political will to mplement the recommendations of the LLRC. However, as seen by the failures of Committees and Commissions to impartially investigate and provide justice in the ACF Muttur Massacre, the case of the Trincomalee 05, the Weliweriya Inquiry, the Welikada Prison Massacre and the Parliamentary Committee appointed to Impeach Sri Lanka’s 43rd Chief Justice, the government continues to display its lack of will to strengthen domestic judicial processes, reverse the culture of impunity and uphold the Rule of Law.

In 2011, the Committee Against Torture (CAT) expressed serious concern about the continued and consistent allegations of widespread use of torture and other inhuman or degrading treatment of suspects in police custody, especially to extract confessions or information to be used in criminal proceedings. The Committee also suggested that torture and ill-treatment perpetrated by state actors, both the military and the police, have continued after the end of the war in many parts of the country. After the Commonwealth Secretary General, K. Sharma, announced shortly before the CHOGM that the Sri Lankan government would set up a National Inquiry on Torture under the Human Rights Commission of Sri Lanka (HRCSL) with the assistance of the Commonwealth Secretariat, the Chairman of the HRCSL confirmed media reports last December that the National Inquiry on Torture has been postponed indefinitely, upon request by several civil society organizations that have sought a postponement of the investigations. The HRCSL, however, has not named these organisations or their reasons for postponement, when requested to do so, and have refrained from consulting many civil society organizations and lawyers, including the undersigned organizations, which have been engaging with the HRCSL on variety of issues including torture.

In these circumstances, we are of the firm belief that there is no alternative but the establishment of an international mechanism for inquiry into human rights abuses, accountability for war crimes and crimes against humanity with a UNHRC technical cooperation team and a time bound action plan. We endorse the recommendations made by the High Commissioner in her report submitted to HRC 25 (A/HRC/25/23).

In conclusion, we wish to state that civil society remains committed to reversing the culture of impunity, the collapse of the Rule of Law, all forms of human rights violations and religious extremism that make up for the authoritarianism our country is challenged with. We will defend our democratic rights at all times!