Economic sanctions: Writing is on the wall 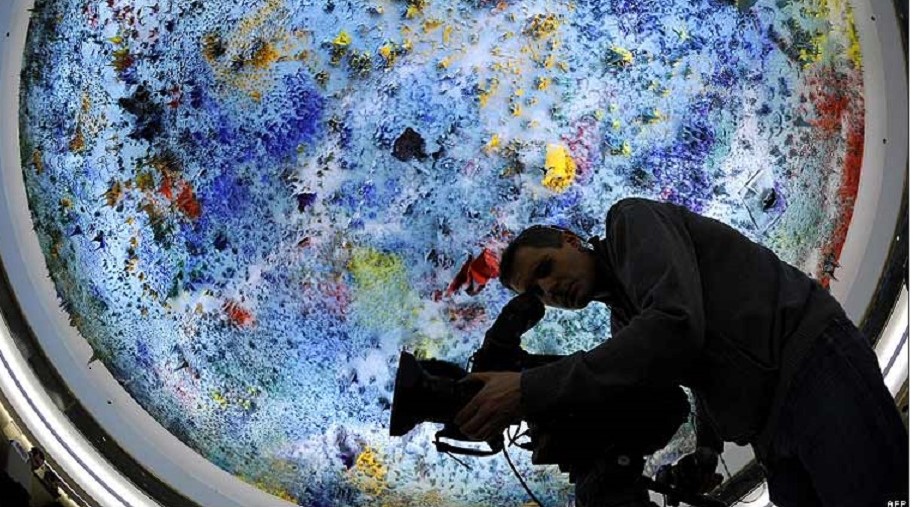 [UNHRC from a photographer’s view]
This week, the global insurance giant, American International Group (AIG), announced that it was pulling out from Sri Lanka, effective from 31 August. The decision to withdraw from the Sri Lankan market was first communicated as early as June this year. AIG’s share in the local insurance market is a meagre 0.3 per cent and its withdrawal is unlikely to have an impact on the local market.

An AIG statement attributed the pull out to the on -going effort to streamline its operations. General Manager of AIG’s Colombo office, Baldev Singh was on record as saying, “the decision was based on the assessment of current size, future potential cost of capital and various other performances and economic indicators.”

In the same week, US based fund Janus sold shares in Conglomerate, John Keells Holdings, resulting in a net foreign outflow of 4.52 billion rupees (US $34.73 million), the worst net foreign selling on the Colombo bourse since 25 March 2010.

The local currency fell due to heavy dollar demand and a moral suasion by the Central Bank capped the depreciation.

The two events may appear unrelated, but not so, if you add the third: A leading Sunday English newspaper reported last week that international export credit agencies have begun imposing ‘sanction clauses’ into agreements with Sri Lanka, in anticipation of potential international sanctions. The ‘sanction clauses’ would mean that the local partners would have to pay a higher premium to the lending agencies if the sanctions are imposed. The newspaper also added that the Attorney General’s Department has opposed.

It does not take an economist to connect the dots: The scary prospects of sanctions are looming large. It appears, some have already begun to jump ship.

Chinese and Russian
For the moment, the government is hinging on the hope that it would be defended by the Chinese and Russian vetoes, should matters related to Sri Lanka’s alleged war crimes ever reach the UN Security Council (of which resolutions have a binding effect on the member States). That is a logical expectation. Both China and Russia, who view such interventions as an interference of internal affairs of sovereign States and also have their own human rights concerns in Chechnya, Xinjian and Tibet, would not commit to a move that would set a precedent on their own.
However, unilateral sanctions by the US and the European States, or possibly by the EU are a real possibility. Such measures are no less disastrous. Recent EU and US financial sanctions have already bitten the Russian economy which, however, had slowed down even before the sanctions were announced as an impact of the declining revenue from oil and gas.

Economic sanctions proved to be effective when they are imposed against ‘friends’. ( in other words, countries that have a greater dependency on or interdependency with the punishing State/s).
The EU (26% of total exports) and the US (21%) are the two leading export markets of Sri Lanka. Any potential sanctions by those countries, who are also Sri Lanka’s traditional friends (and also the main sponsors of a series of UNHRC resolutions on Sri Lanka) would be bound to take a heavy toll on the $ 67 billion Sri Lankan economy.

The incumbent government and its key interlocutors, who regularly bash the West, are disregarding those existential realities. President Mahinda Rajapaksa, early this week announced that Sri Lanka would not grant visas to the UN investigators. In the same meeting with the Foreign Correspondent, he was on record as saying: “I don’t think anybody will take it [the UN investigation] seriously, other than the people who want it.”

That is a dangerous misreading of the situation. ‘People who want it’, that is (powerful liberal democracies of the West) do actually matter the most in international politics. They simply rule the roost, whether you like it or not. They have military, financial and political power and have played a significant role in global peace and human rights. In the anarchical situation in the international system, as defined by all the major international relations theories ( because the States are sovereign entities, which exist in the absence of central authority), those States have historically exercised their powers to achieve desirable results, many of which are intrinsically influenced by the national character and strategic culture, shaped by liberal democratic values.

22,000 nationalist
That is why the Americans introduced democracy to the conquered Axis powers of Japan and West Germany while the Soviets and their secret police slaughtered 22,000 nationalist Polish officer corps in the jungle of Katyn and rolled down an iron curtain across the Warsaw bloc.
Sri Lankan government’s mantra that it is a victim of the West and an international conspiracy may appeal to the local voter. However, it does not change the country’s status quo in the international system. Myopia, paranoia and arrogance that have defined the government’s policy towards the West and the UN probe further aggravates its delicate position.

What is sad is that Sri Lanka is risking another opportunity for an economic take off. The country squandered the earliest opportunity, due to the populist economic and social policies that were introduced soon after independence. In the ’80s, it laid to waste another chance which came with the free market economy, by mismanaging its foreign and domestic policies.

Sri Lanka should not squander the latest opportunity, which offers economic salvation for its 20 million people. The economy is growing at a decent seven per cent and decades of backlog in infrastructure is being addressed and the country is surely on the move. However, all those attributes were out there, in the late ’70s, after J.R. Jayewardene liberated the economy. However, soon optimism turned into despair as Jayewardene himself through his authoritarian tendencies and misreading of international system vis a vis Indira Gandhi’s India plunged the country into chaos and two insurgencies.

Mahinda Rajapaksa, who won the war and thereby gave a new lease of life and hope, should not repeat the same mistake. However, his reading of the West and the US appear to be equally flawed and his reaction is no less irrational and dangerous than Jayewardene’s towards India.
Ceylon Today