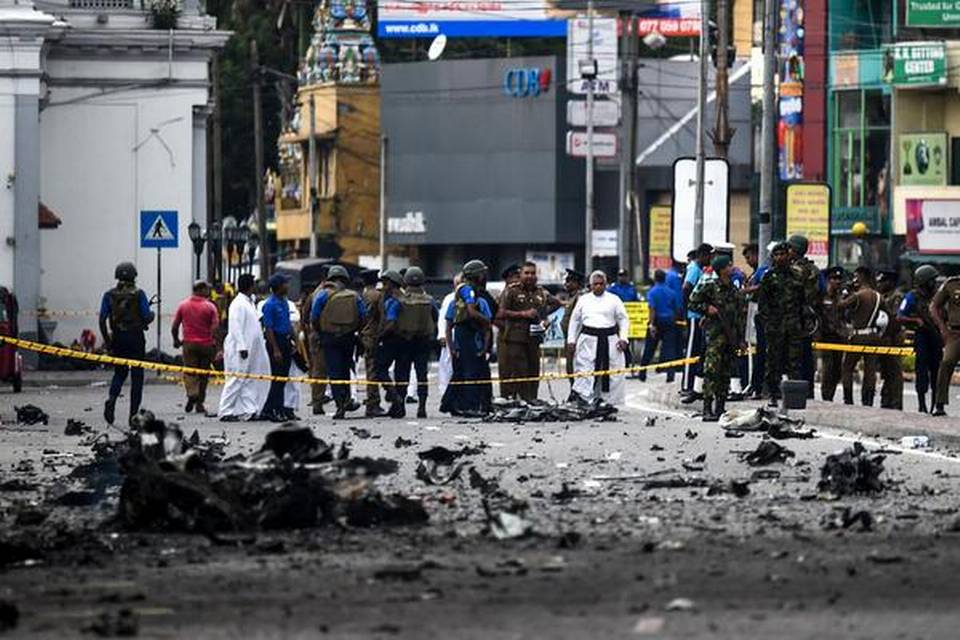 Image: Another scare: Sri Lankan security personnel inspecting the debris of a car that exploded on Monday near the St. Anthony’s Shrine in Colombo.   | Photo Credit: AFP.

The Colombo mission, among the potential targets, took precautions after the early-April warning.

India had issued an alert to Sri Lanka in early April on possible bomb attacks at different spots in the island, including the Indian High Commission building, sources in Colombo and New Delhi said, pointing to a possible lapse on the part of Sri Lanka’s security agencies.

Health Minister Rajitha Senaratne told media-persons on Monday that “international” intelligence agencies had “warned the government on April 4” regarding an impending attack in the country. He did not name the country. However, sources in Colombo told The Hindu that India had shared “as much information as they could” at that time.

The Colombo mission, which was among the potential targets, had since taken “necessary precautions” .

Further, a note from the DIG-Special Protection Range, bearing a seal of the date of April 11, and addressed to security divisions of Ministers, diplomatic community, judges and former Presidents, had warned recipients of “suicide attacks” being planned by “Mohammed Zaharan”, “Leader of the National Thowheeth Jamaath”, the organisation that Sri Lankan authorities on Monday attributed the attacks to. Referring to “several people” involved in the plot, the note said churches and the Indian High Commission in Colombo were targets. The note, written in Sinhala, has been doing the rounds on social media since Sunday’s blasts. While initially a section of Sri Lankan authorities dismissed it as a fake document, it acquired more credence on Monday, especially after Minister Senaratne named the same Islamist radical organisation, little known even within the country.

Police have made nearly 30 arrests, but the person identified as the fringe outfit’s “leader” is said to be absconding. While many have commended Sri Lankan police and other security agencies for their swift response following the blasts, questions about their strategy to prevent the attacks remain unanswered.

What specific measures were taken between April 4 (when Sri Lanka received the intelligence on the matter), April 11 (when the DIG’s note was sent) and April 21 (when the serial blasts occurred) remains unclear to many, even within the government, including at the highest levels. Prime Minister Ranil Wickremesinghe has said that the authorities were aware, but he and his Ministers were not informed.

Not that the Sri Lankan side was caught unawares. Sources part of key security briefings told The Hindu that a list of at least hundred suspects had been drawn up some time ago, with select phone numbers to monitor. The names, reportedly Muslim, were mostly of local youth.

Sri Lankan authorities were already tracking a few young men with suspected links with militant organisations abroad following the arrests of at least two youth in December, who were accused of damaging Buddha statues in Mawanella town, some 100 kms away from Colombo. All the same, the responses to these different leads somehow did not add up to a timely operation to avert the imminent risk, sources noted.

“The intelligence apparatus was preoccupied with their heightened drive against narcotics, which has become a major political issue. Moreover, they seem to have let their guard down around New Year weekend [Sinhala and Tamil New Years were celebrated on April 14] when the whole island virtually shuts down. That is possibly one reason,” said a source familiar with the investigations said.

Moreover, as Mr. Wickremesinghe’s statement on Sunday indicated, the lingering tensions between the President and him since the political crisis last year may have been a factor, say some. Government Ministers on Monday voiced serious concern over police “inaction” despite prior warning and even sought the resignation of the IGP. Both the Law and Order and the Defence Ministries are with President Maithripala Sirisena.