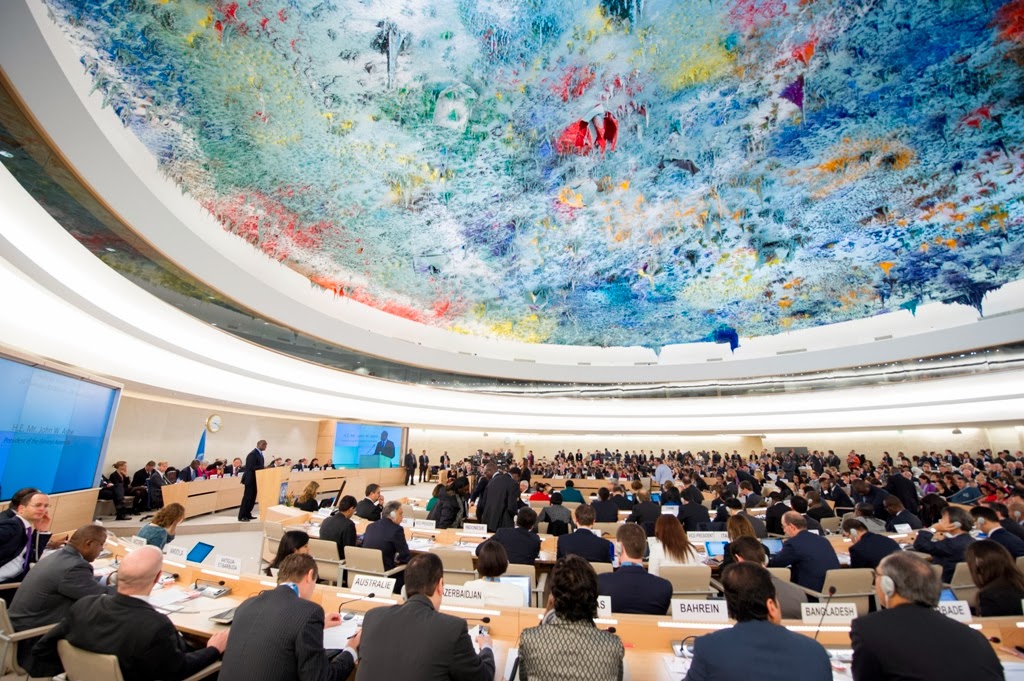 25/1. Promoting reconciliation, accountability, and human rights in Sri Lanka The Human Rights Council,
Reaffirming the purposes and principles of the Charter of the United Nations,
Guided by the Universal Declaration of Human Rights, the International Covenants on Human Rights and other relevant instruments,

Bearing in mind General Assembly resolution 60/251 of 15 March 2006,
Recalling Human Rights Council resolutions 5/1, on institution-building of the Council, and 5/2, on the code of conduct for special procedures mandate holders, of 18 June 2007,

Recalling also Human Rights Council resolutions 19/2 of 22 March 2012 and 22/1 of 21 March 2013 on promoting reconciliation and accountability in Sri Lanka,

Reaffirming that it is the responsibility of each State to ensure the full enjoyment of all human rights and fundamental freedoms of its entire population,

Reaffirming also that States must ensure that any measure taken to combat terrorism complies with their obligations under international law, in particular international human rights law, international refugee law and international humanitarian law, as applicable,
Recognizing the Human Rights Council’s support of all Sri Lankans to enjoy their rights regardless of creed, faith, or ethnicity, in a peaceful and unified land,
Welcoming and acknowledging the progress made by the Government of Sri Lanka in rebuilding infrastructure, demining, and resettling the majority of internally displaced persons, but noting nonetheless that considerable work lies ahead in the areas of justice, reconciliation, demilitarization, and the resumption of livelihoods, and stressing the importance of the full participation of local populations, including representatives of civil society and minorities, in these efforts,
Welcoming the announcement made by the Government of Sri Lanka that elections to the Provincial Council in the Northern Province will be held in September 2013,
Welcoming the successful Provincial Council elections held on September 21,2013 and in particular the high turn-out and participation in all three provinces, but noting with concern reports of election-related violence, as well as voter and candidate intimidation,
Expressing appreciation for the efforts of the Government of Sri Lanka in facilitating the visit of a technical mission from the Office of the United Nations High Commissioner for Human

Rights, and encouraging the Government to increase its dialogue and cooperation with the Office of the High Commissioner, and welcoming the visit of the High Commissioner to Sri Lanka in August 2013,
Expressing deep concern over reported intimidation and retaliation against civil society members, including those who met with the High Commissioner during her visit,
Expressing serious concern at the continuing reports of violations of human rights in Sri Lanka, including sexual and gender-based violence, enforced disappearances, extrajudicial killings, torture and violations of the rights to freedom of expression, association and peaceful assembly, as well as intimidation of and reprisals against human rights defenders, members of civil society and journalists, threats to judicial independence and the rule of law,
Alarmed at the rapid rise in violence and discrimination on the basis of religion or belief, particularly against members of religious minority groups in Sri Lanka, including Hindus, Muslims and Christians,
Calling upon the Government of Sri Lanka to fulfil its public commitments, including on the devolution of political authority which is integral to reconciliation and the full enjoyment of human rights by all members of its population,
Taking note of the report of the Lessons Learnt and Reconciliation Commission of Sri Lanka, its findings and recommendations, and acknowledging its possible contribution to the process of meaningful national reconciliation in Sri Lanka,
Recalling the constructive recommendations contained in the Commission’s report, including the need to credibly investigate widespread allegations of extrajudicial killings and enforced disappearances, demilitarize the north of Sri Lanka, implement impartial land dispute resolution mechanisms, re-evaluate detention policies, strengthen formerly independent civil institutions, reach a political settlement on the devolution of power to the provinces, promote and protect the right of freedom of expression for all persons and enact rule of law reforms,
Taking note also of the national plan of action to implement the recommendations of the Lessons Learnt and Reconciliation Commission of the Government of Sri Lanka and its commitments as set forth in response to the findings and recommendations of the Commission,
Reiterating Noting that the national plan of action does not adequately address all of the findings and constructive recommendations of the Commission, and encouraging the Government of Sri Lanka to broaden the scope of the plan to adequately address all elements of the Commission report,
Also reiterating Noting with concern that the national plan of action and the Commission’s report do not adequately address serious allegations of violations of international human rights law and international humanitarian law,
Emphasizing Emphasizes the importance of a comprehensive approach to transitional justice incorporating the full range of judicial and non-judicial measures, including, among others, individual prosecutions, reparations, truth-seeking, institutional reform, vetting of public employees and officials, or an appropriately conceived combination thereof, in order to, inter alia, ensure accountability, serve justice, provide remedies to victims, promote healing and reconciliation, establish independent oversight of the security system and restore confidence in the institutions of the State and promote the rule of law in accordance with international human rights law, with a view to preventing recurrence of violations and abuses
Also underlining underlines that truth-seeking processes, such as truth and reconciliation commissions, that investigate patterns of past human rights violations and their causes and consequences are important tools that can complement judicial processes and that, when established, such mechanisms have to be designed within a specific societal context and to be founded on broad national consultations with the inclusion of victims and civil society,  including non-governmental organizations,
Recalling Reaffirms the responsibility of States to comply with their relevant obligations to prosecute those responsible for gross violations of human rights and serious violations of international humanitarian law constituting crimes under international law, with a view to end impunity;
Recalling the High Commissioner’s conclusion that national mechanisms have consistently failed to establish the truth and achieve justice, and her recommendation that the Human Rights Council establish an international inquiry mechanism to further investigate the Noting the call made by the High Commissioner for an independent and credible international investigation into alleged violations of international human rights law and international humanitarian law and monitor any domestic accountability processes,
Encouraging the Government to increase its dialogue and cooperation with the Office of the High Commissioner, including with regard to technical assistance,
Share
Facebook
Twitter
WhatsApp
Pinterest
Email