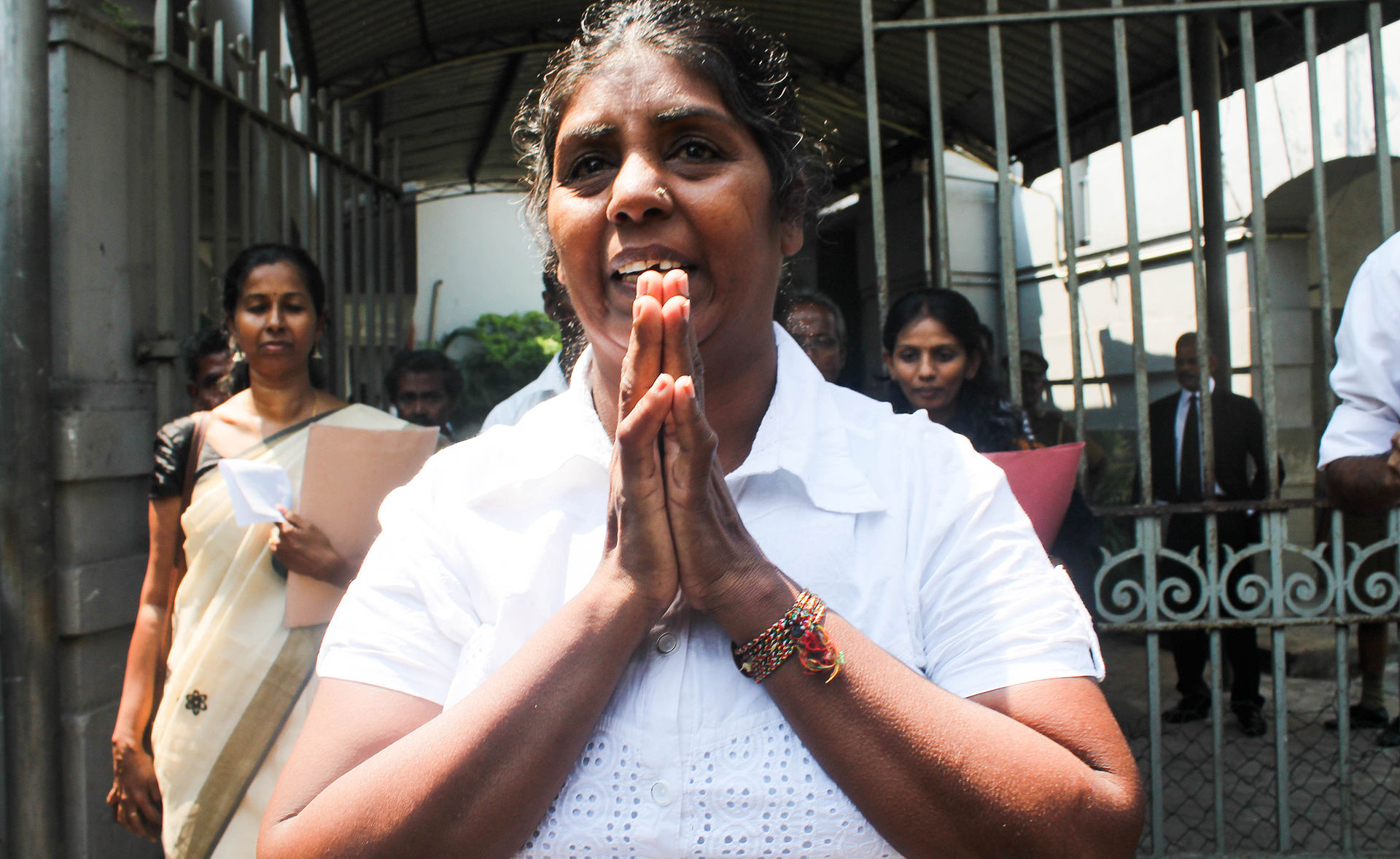 Image: Jeyakumari Balendran who was arrested under PTA in March 2014 (and released  on 10 March 2015 continue to be under police surveillance; Vikalpa photo)

In March 2014, my colleague, Father Praveen and I were arrested and detained under the Prevention of Terrorism Act by the Terrorist Investigation Department, under Sri Lanka’s authoritarian government of former president Mahinda Rajapakse.

Three months ago, under the new government whose slogan has been good governance and rule of law, I was briefly detained and interrogated at the airport while traveling to the United Kingdom for meetings related to human rights. More than two years after the new government came to power, the investigation against me and Father Praveen continues and we are still terrorist suspects.

Court orders restricting our freedom of expression, obtained in March 2014 by the state are still in place. Our electronic equipment, confiscated at that same time, has still not been returned. The investigation led to me being publicly discredited as a terrorist supporter. My parents and I will find it difficult to ever recover.

We were arrested while looking into the arrest of a large number of Tamils in north Sri Lanka, including Balendran Jeyakumary, the mother of a disappeared child, who had been a vocal campaigner against forced disappearances. Although Jeyakumary was conditionally released two months after President Maithripala Sirisena took office in January 2015, she was re-arrested a few months later and detained for about a week.

She was again summoned for intense interrogation in August 2016. She still must report to the police every month and must go to court regularly. She also faces social isolation, struggles to find work and has been compelled to keep her young daughter in a hostel. The arrest ruined her and her daughter’s life.

Continuing use of the Prevention of Terrorism Act

The United National Party and the Sri Lanka Freedom Party, the two parties that have ruled Sri Lanka since independence, have used the act to suppress dissent for decades.

In 2008, during the last phase of the war, the act was used to arrest, detain and convict Tamil journalist, J.S. Tissainayagam. In 2009, it was used to detain Christian activist, Santha Fernando. After the war, in 2013, it was again used to arrest and detain opposition Muslim politician, Azath Salley. These are a few better-known examples.

A coalition of the two main parties formed a government in 2015 and continued to use the terrorism act to arrest and detain people, mostly Tamils, albeit on less intense scale.

Some were abducted and later found to be detained. No one has been held accountable for these abductions, bringing into question whether the directives on arrest and detention by President Sirisena in June 2016 have had any impact.

The arrest and detention of Jeyakumary, Tissainayagam, Santha, Salley, as well as Father Praveen and I received national and international media coverage and we had the support of committed lawyers and activists as well as the diplomatic community.

I believe we were released, after periods ranging from few days to two years, due to that support. But people who didn’t get such attention, continue to languish in jail without charge. When they are charged, trials can take years.

In 2015, two Tamil mothers were acquitted after being detained for a total of 22 years. There has been no acknowledgement of their suffering, no apology and no compensation.

I have been told by detainees and lawyers that charges were framed and convictions obtained based on confessions made under duress, as the terrorism act allows such evidence to be admitted for trial. Most detainees I have met have been tortured. They have been scarred for life, mentally and physically.

Replacing the act but retaining its draconian features

Recently, I saw a leaked version of a draft policy and legal framework for the Counter Terrorism Act, that will replace the previous act. Like its predecessor, it contains many draconian clauses. It has vague and broad definitions that could infringe on free expression and activism and grants excessive powers to the police to detain people for long periods without judicial supervision.

The spirit and purpose of the old and new acts are similar: giving extreme powers to the executive, military and police in the name of preventing and countering terrorism, and disregarding life, liberty and dignity.

The previous act served as a license for enforced disappearances, arbitrary detention and torture. It removed lifesaving protections when they were most needed: within the first few hours and days of a person being arrested.

The new Counter Terrorism Act seeks to extend this license with a new label and face. No official information has been made available to Sri Lankan citizens about the replacement act either.

Numerous U.N. treaty bodies have pointed out the terrorism act’s incompatibility with Sri Lanka’s international obligations, most recently the Committee against Torture in December 2016.

For several years, the U.N. High Commissioner for Human Rights raised similar concerns. But at the same time, some U.N. officials appeared to be willing to ignore these concerns or place excessive confidence and faith in the Sri Lankan government. In a report released earlier this month, the European Commission said that Sri Lanka must ensure its counter-terrorism legislation is in line with international human rights conventions. But it still granted trade privileges to Sri Lanka assuming the “government has started a legislative process to replace the Prevention of Terrorism Act and is making good progress in releasing persons detained under it.”

This appears optimistic at best. While some detainees were released in 2015-2016, there have been many new arrests. Cases continue at a snail’s pace and even those released continue to be harassed. The terrorism act reform process is shrouded in secrecy, with the government appearing to consult the European Commission, U.N. and a few experts of their choice, instead of being transparent with the victims, their families and the Sri Lankan people.

Repealing the Prevention of Terrorism Act and getting justice for detainees is a crucial element in forging reconciliation. How can we victims and our families talk of reconciliation if we are still being detained, investigated and face continuing restrictions?

How can we talk of reconciliation if there is no acknowledgement, no apology and no reparations? How can we believe guarantees of non-reoccurrence when the new government did not repeal the act for two years, when secret processes are underway to bring in similar laws, and persons continue to be abducted?

As a victim of the terrorism laws, what I think needs to be done is to ensure justice to all past and present detainees, repeal the legislation and, instead of focusing on equally draconian new anti-terror laws, focus on strengthening legal and institutional frameworks to combat crime and terrorism, while ensuring due process and protections.

The coming months could be crucial. The Council of Europe and the European Parliament must insist on the repeal of the terrorism act before enhanced trade status is granted. At the March session of the U.N. Human Rights Council, its member states and the U.N. High Commissioner for Human Rights must insist that the government fulfills its October 2015 commitment to repeal the Prevention of Terrorism Act in line with international standards. Both the U.N. and E.U. must stand for justice for terrorism detainees.

But what’s most needed is for the Sri Lankan people to recognize the injustices that have been done to their fellow citizens, brothers and sisters and express outrage about laws that infringe on their safety, freedom and dignity.

The president and prime minister must be transparent about efforts to bring in similar laws. Catholics and church leaders, the majority of whom have been silent, should be part of this, insisting that unjust laws are against the faith and that to justify them or be silent is a sin.

This article was first published at ucanews on 3rd Feb. 2017