Disrespect for the courts and the law is out in the open;targeted attack on judicial staff and officers quite inevitable if the slightest dissent is shown 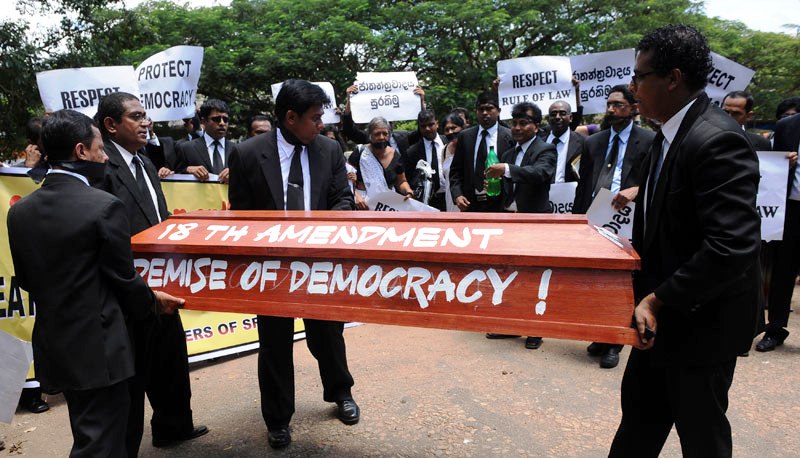 Kishali Pinto Jayawardenae
The attack on the Secretary of the Judicial Service Commission (JSC) last Sunday, which some have read justifiably as an attempted abduction, is certainly quite unprecedented in the history of this country.
We may have had tensions between the judiciary and the executive before. But the level of impunity with which this attack was carried out is both shocking and shameless in its audacity. Public confidence that due and proper investigations into the attack and the punishing of the perpetrators is abysmally low.

The fact that such attacks directly target Sri Lanka’s judiciary is a development that should propel each one of us into even a belated awareness as to the nature of the enormous crisis that confronts us.

President not bound by the Constitution

Attempts by government ministers to impliedly threaten to impeach the Chief Justice and then magnanimously as it were, declare that the government does not want the tug of war between the executive and the judiciary to continue, is part of this charade. The outrage displayed by the Speaker in regard to the Supreme Court Determination not being handed to him but to a parliamentary official is similarly disingenuous. Who does the government think that it is fooling? Or is it simply that the government really does not care any more? We suspect that this is indeed the case. The government’s modus operandi in regard to the Divineguma Bill makes that self evident.

So it is now quite clear. Article 111C of the Constitution which stipulates grave punishment (including deprivation of civic rights) for anyone who, “without legal authority” interferes or attempts to interfere with the judicial powers and functions of any judge, is not applicable to Sri Lanka’s Executive President for that matter, his Secretary purporting to act on his behalf.
And when such interference is manifest, we are now supposed to infer that has ‘legal authority’ to engage in such actions and get away with it. This appears to the only logical conclusion that we can arrive at.

Duty of judges to speak out to protect the institution

Article 111C is no stranger to Sri Lanka’s constitutional scheme and was contained in the 1972 Constitution as well. Executive interference with the ‘powers and functions’ of judges had not been so blunt as to directly invoke this prohibitive clause. The creeping subtlety with which basic structures of the country’s judicial system have been undermined has only been paralleled by its exceedingly dangerous coercive character. In later years, this executive interference became far more direct, accompanied as it was by the political ambitions of some who sat on the Bench.

A few judges have been bold enough to speak out publicly as to the fate that has befallen the independence of Sri Lanka’s judiciary such as former judge of Sri Lanka’s Supreme Court, Justice CV Wigneswaran some years ago in relation to the degeneration that prevailed during former Chief Justice Sarath N. Silva’s period. More recently, we had retired High Court judge W.T.M.P.B. Waravewa speaking in the wake of his delivering the dissenting order in the conviction of former Army Commander Sarath Fonseka. But these occasions of outspoken and forthright condemnation of the status quo by courageous judicial officers are regrettably few and far in between.

Certain basic principles are very clear. The first principle is that it is the first duty of the Bench and the Bar to oppose executive interference with the judiciary. Towards that end, strike action resorted to by judicial officers is perfectly legitimate though there are those who may profess to think otherwise on grounds that this is to thrust judicial officers into the political arena. This is to engage in pure casuistry (ie specious or excessively subtle reasoning intended to mislead). One would have wished for more honesty in acknowledging the gravity of the threat faced by Sri Lanka’s judiciary but perhaps that is to ask for too much indeed.

Harking back to the history

The second Republican Constitution of 1978 did contain many features that were a definite improvement on what had prevailed. The old JSAB and the JSDB, which had proved to be notoriously incapable of preventing political interference in the minor judiciary, were replaced by an independent JSC whose considerable authority was enhanced thereafter by the 17th Amendment to the Constitution. The interventions of the Constitutional Council in being empowered to approve the nominations of members to the JSC, (other than its Chairman which by tradition is the Chief Justice), was also laudable. But this was only a short summer. The 18th Amendment put paid to all those ambitions.

Are we to consign Sri Lanka to the ranks of failed states?

During the past decade, the JSC underwent considerable turmoil at several different levels. The resignations of (then) Justice Shiranee Bandaranayake, now Chief Justice and (now retired) Supreme Court Justice TB Weerasuriya from the JSC on ‘grounds of conscience” ( an euphemism for stark differences with the former Chief Justice) during the period of the Sarath Silva Court underscored the sharp tensions that were at play.

It was also during this time that the JSC, ruled by a mercurial and deeply authoritarian Chief Justice, drew a rebuke from the United Nations Human Rights Committee on the basis that its ruling processes as to the transfer, disciplinary control and dismissal of judges of the subordinate courts lacked transparency and appeared to be devoid of fairness.

At that time, the threats to the public respect accorded to Sri Lanka’s judicial institution emanated largely from within. Yet years later, the impact continued as much as an antique vase once broken can never be restored to its former glory even if the most careful restoration work is carried out.

Now we have a situation where disrespect for the courts and for the law is out in the open and where a targeted attack on judicial staff and officers is not only possible but quite inevitable if the slightest dissent is shown. The credible implication of a government Minister in the attacks on the Mannar courthouse as well as last week’s assault on the JSC Secretary makes that plain.

Is the silence on the part of those who have a duty to speak out, going to continue despite this grave turbulence? If so, then we may as well wash our hands and consign Sri Lanka to the ranks of failed states.
The President and Sri Lanka’s judiciary – ST