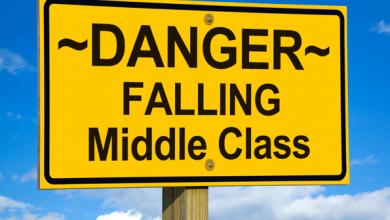 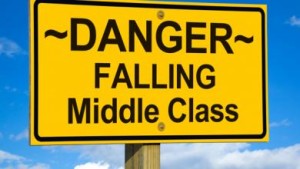 With the impeachment of the chief justice wheeling out of state control, a Business Times (BT)-Research Consultancy Bureau (RCB) poll conducted on the eve of Christmas and the New Year shows that disenchantment against the government is growing.
“At the current rate progress is a dream only,” noted one respondent during street interviews by the RCB, while another added: “Many in parliament are allegedly involved in all kinds of anti-social activities and should be jailed. Only good men must govern.”

The poll, a joint initiative by the BT and RCB over the past 18 months to test the pulse of the nation over many issues of national importance, saw unanimity on all the responses from email respondents and street respondents, representing different classes in society – except one.

To the question ‘will there be prosperity in Sri Lanka (next year)’, only 26.5 per cent of email respondents said YES while that percentage (YES vote) was much higher at 45 per cent among street respondents.

Details of the polls are contained in the graphics.

Given below is a synopsis of comments received in the poll.

Email comments
-How is prosperity measured in the country? If the country is prosperous, we (as many as possible) need to be able to live the life we choose, within reasonable parameters. If that is the case, here are the reasons why I say country will not enjoy true prosperity: (1) The development that is taking place is making ‘putting food on the table’ increasingly difficult for the majority; it does not allow a middle class human being to raise his/her living standards (COL is high; can’t aspire to have his/her own car anytime soon; the gap between middle/poor class earnings and COL is widening dramatically, etc), (3) It would seem that the rich are getting richer, fully supported by Government – transferably/sale of vehicle permits; racing cars; cuisine in Parliament at Rs.80 a plate; etc, etc.

-The prospect of prosperity for Sri Lanka in all probability will recede far into the future, faster and faster  with divisive politics
, 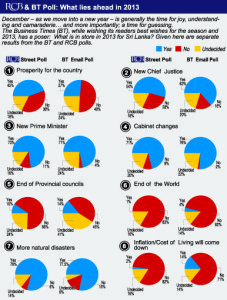 centralization of ruling power in a dynasty, corruption and lawlessness taking its place.
-Proceedings against the chief justice are based on some puerile charges. The Government is unwilling to hear this in an unbiased independent courtWhy?

-A sop to the masses; a stop gap measure to divert attention from critical issues; a ‘hint of promise of renewed effort on behalf of the people’ – will have no basis in reality – the same rogues will be circulated! We don’t feel represented by these so called representatives of the people! It’s a tough job to please all the people all the time BUT that’s why we have representatives to balance in a fair manner, the ‘goodies’ given to rich, middle class and poor!

-Bigger natural disasters will occur because of climate change

-Prosperity is not possible due to the unrelenting mismanagement of the economy.

Street comments
-At the present rate, the year will be one of hunger with cost of living rising and jobs lacking in spite of the state claim of progress.

-The chief justice cannot be removed thought Mr. R (President) seems bent on to pursuing with this mission.
-The budget has forgotten the private sector and failed the public servant.

-If the President appoints a new Prime Minister who is a family member or one faithful to him, there will still be problems within the family circle. That explains why he is keeping the ailing D.M. Jayaratne in this position.

-There is no use of an old man as PM as sickness prevents him from work, so the President will invariably have to appoint a new man.

-Changes in the cabinet are not extraordinary.

-If provincial councils are abolished issues with Tamils and Muslims will arise again. Thus it is imperative that we find solutions to avoid further ethnic tensions and bloodshed.

-Do you need to have 9 PCs in a small country? It will only increase expenditure for Chief Ministers and other expenses. PCs must go.

-People’s crimes have given vent to natural disasters.

-The COL will never come down. It will increase instead. The Government is taking the public for a ride with false statistics.

-If PCs are not abolished their power will decrease before the Northern PC is established.

-If changes in cabinet take place it should not be limited to just one or two but all need to change and wise men must replace them. Men like Bandula and SB are useless.

-If the COL comes down and people are able to manage with what they earn, then the New Year will be a bright one.
ST