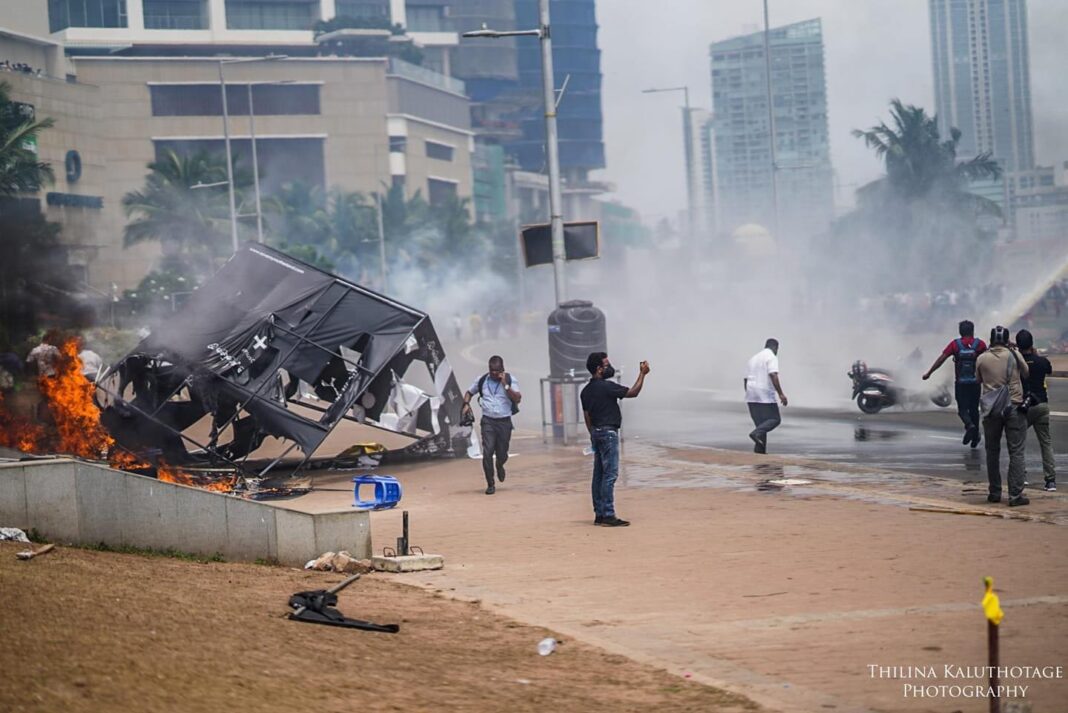 IGP Chandana Wickremaratne yesterday (01 June 2022) appeared before Colombo Fort Magistrate upon receiving notice. The IGP was directed to show cause as to why he failed to transfer Western Province Senior DIG Deshabandu Tennakoon, ignoring the Attorney General’s instructions.

On May 23, the Attorney General had instructed the IGP to consider transferring Western Province Senior DIG Deshabandu Tennakoon to prevent unnecessary intervention into the investigations relating to the attack on peaceful protesters.

Appearing in open court, the IGP said that he has no powers to transfer police officers. He further said transfers of police officers are being made through the Public Service Commission and the Ministry Secretary.

Meanwhile, President’s Counsel Sarath Jayamanna appearing for the Colombo High Court’s Lawyers Association moved Court to issue a suitable order against Deshabandu Tennakoon for his failure to prevent the attack on peaceful protesters disregarding the written instructions given by the IGP. He told the Court that the IGP had sent a letter to Deshabandu Tennakoon on May 8 explaining the possibility of a conflicting situation between two factions at Galle Face .

The IGP has given instructions to take necessary arrangements to prevent such a conflict. Jayamanna said Tennakoon should have taken preventive measures in accordance with the Police Ordinance and the Criminal Procedure Code.

President’s Counsel Nalin Ladduwahetty appearing for the interests of Senior DIG Tennakoon admitted the fact that Deshabandu Tennakoon received conflicting telephone calls from the IGP and Secretary to the Ministry of Public Security regarding the measures to be taken against the attackers who entered Galle Face.

The Court was further informed that police were compelled to use tear gas and water cannons against the attackers after Deshabandu Tennakoon received a telephone call from President Gotabaya Rajapaksa.

Thirteen suspects including SLPP parliamentarians Sanath Nishantha and Milan Jayatilleke were yesterday ordered to be further remanded till June 8 by Colombo Fort Magistrate Thilina Gamage in connection with the incidents that took place at Mainagogama and Gotagogama on May 9.

President of the Sri Lanka Podujana Education Services Union Wasantha Handapangoda, Moratuwa Mayor Saman Lal Fernando, Chairman of the Boralesgamuwa Municipal Council Aruna Priyashantha and leader of Nawa Sinhale National Organisation Dan Priyasad were among the persons who were ordered to be remanded.

Meanwhile, the Magistrate issued an order directing the IGP to appoint a Senior Deputy Inspector General to observe the ongoing investigations against Deshabandu Tennakoon.

President’s Chief of Staff Anura Dissanayake, Secretary to the Ministry U.D.C. Jayalal, and other officials of the line agencies of the Ministry were also present at the discussion.

Edited version of a article appeared in the Daily Mirror.