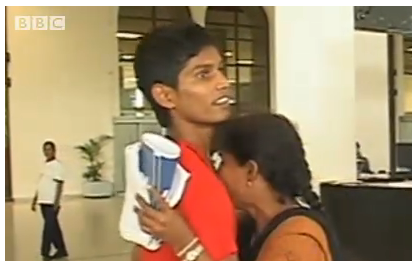 A group of 25 Sri Lankans deported from the UK has arrived in Sri Lanka, amid warnings that Tamils among them may be tortured.
UK officials said on Wednesday that 60 failed asylum seekers and visa overstayers were being sent back.
But many won last-minute court injunctions preventing their return.
Human rights groups say that some Tamils who were sent back are in danger of being tortured because of their alleged links to separatist rebels.

International Organisation of Migration (IOM) officials told the BBC’s Charles Haviland at Colombo’s international airport that there were 25 people on board the chartered flight from the UK.

Thirteen people among the returnees are Tamils, officials say, along with eight Muslims and four Sinhalese people.

Our correspondent says that families of those Tamils who were sent back waited anxiously at the airport as their loved ones were quizzed by the authorities and released.
Torture allegations

Rights groups say that in previous cases, Tamil returnees have been arrested some time after coming back and in some cases tortured. The Sri Lankan government denies this. Both it and the UK have insisted that those being sent back are not in danger of being mistreated.
Continue reading the main story
Analysis
image of Charles Haviland Charles Haviland BBC News, Bandaranaike International Airport

There were emotional scenes as those deportees with families to greet them arrived home, some after more than 10 years in Britain.

Hugs were exchanged with parents, wives and siblings.

Whatever their misgivings about being deported, most looked happy.

Those without waiting families were less conspicuous, and all were met by officials of the International Organisation for Migration, who disbursed cash for their travel home.

The special flight touched down early on Wednesday and the deportees came through throughout the day.

On landing each was questioned by the Criminal Investigation Department, who exchanged faxes with government officials to clear their entry.

Earlier many waiting relatives were anxious.

Tamils especially said their sons had been picked on by the security forces before leaving Sri Lanka – repeatedly hauled in for questioning or even beaten because they came from the north or were suspected of Tamil Tiger involvement.

The IOM says that while its officials are in no way involved in the deportation process, it will provide financial help for the returnees to be reunited with their families.

Presidential adviser Rajiva Wijesinha said on Wednesday that Britain itself had established that returnees would not be tortured. He said most of those being deported were economic migrants.

Britain says that unless a Sri Lankan Tamil was a high-level activist with the separatist Tamil Tiger rebel group, he or she is unlikely to be targeted on returning to Sri Lanka.

But human rights groups such as Freedom from Torture and Human Rights Watch argue that Tamil people either linked or perceived to be linked to the Tigers – at any level – are at risk if they return.

One Tamil man due to have been sent back told the BBC on Wednesday: “Instead of getting killed there I would far rather commit suicide in the UK.”

A man now on his second asylum application in Britain also told the BBC on Wednesday that he was he was beaten, deprived of sleep and almost suffocated in polythene and petrol by the Sri Lankan police when he was made to return.

The UK Border Agency says the removal of a person only happens where it is satisfied that he or she has no protection needs.