Democracy, the State and the Judiciary 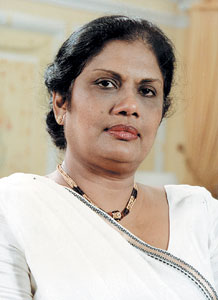 Indeed the most glaring example of the Courts holding against the Government is the Supreme Court judgment of August 2005, cutting short the Presidential term from 06 to 05 years. This judgment was even more surprising, in the circumstances that the Chief Justice himself previously gave advice to the President that she could “take the presidential oath any number of times – even every day, as long as she took oaths at the end of her first presidential term – at the end of 06 years in November 2000”. That President did not move to impeach the said Chief Justice, despite enormous pressure from her Ministers and legal advice that the judgment was incorrect and could be contested before a full bench of the Supreme Court.

The last few months have seen several attempts at interference with the proper functioning of the judiciary. The Mannar incident, the unprecedented statement of the Judicial Service Commission, the physical attack on the Secretary of the JSC who released the statement on the direction of the JSC, use of State media to attack the judiciary, especially the Chief Justice, and now a Motion to impeach the Chief Justice. A Member of Parliament who submitted the motion to the Speaker has publicly stated that the reason for the impeachment motion is the Supreme Court’s determination on the Divineguma Bill. As that Bill seeks to make severe inroads into the areas of competence of Provincial Councils while concentrating power in the hands of a single Cabinet Minister, such a determination was only to be expected. But, in the intolerant political environment that pertains today, judicial decision unpalatable to the Government are not tolerated.

The JR Jayewardene Constitution of 1978, while providing for the impeachment of judges of superior Courts, did not set out safeguards for accused judges. The Standing Orders adopted in 1978 by a Parliament dominated by a 5/6th majority of UNP members, provides for an inquiry into allegations against a judge to be conducted by a Select Committee of the very Parliament that makes allegations against the judge and which parliament will consider whether or not to submit an address to impeach the judge. Surely, justice must not only be done but also seen to be done.

The procedure provided in the standing Orders is in stark contrast to that followed in India, where an inquiry is held not by a committee of parliamentarians but by a three-member committee consisting of a judge of the Supreme Court, a Chief Justice of a State High Court and a distinguished jurist. As the inquiry is judicial in nature, the judge concerned has recourse to a judicial review of the committee’s findings.

Under our Constitution, where a motion for the impeachment of the President is passed by Parliament with a 2/3 majority, the allegations are forwarded to the Supreme Court for inquiry or report. Thus, the guilt of the President is determined not by the parliamentarians who have made the allegations but by the highest court of the land. A mayor, chairman or member of a local authority can be removed only after a retired judicial officer has inquired and found such person guilty of incompetence, abuse of power etc. and such findings are liable to be judicially reviewed. While a dismissed workman can go before a Labour Tribunal and appeal therefrom to the High Court and the Supreme Court, a public officer can appeal to the Public Service Commission and then to the Administrative Appeals Tribunal and if still dissatisfied have recourse to judicial review by the Court of Appeal or Supreme Court. However, under the JR Jayewardene Constitution, judges of the Supreme Court and Court of Appeal who constitute the highest authority that dispenses justice to all, have no remedy if justice is denied to them.

The issue of safeguards for judges of superior Courts against whom allegations are made was considered by the Select Committee on Constitutional Reform appointed during my Presidency. On the basis of consensus reached in the Select Committee, both my Government’s Proposals for Constitutional Reform, 1997 and the Constitution Bill that I presented to Parliament on 03 August 2000 provided for an inquiry of a judicial nature to be held outside Parliament when a motion for impeachment is presented against a judge. In the case of the Chief Justice, the inquiry would be held by a committee consisting of three persons each of whom hold, or have held, office as judge in the highest Court of a Commonwealth country and in the case of any other judge by a committee consisting of three persons who hold, or have held, office as a judge of the Supreme Court or the Court of Appeal. Of course, the Constitution Bill of 2000 did not become the supreme law of the land due to the inopportune actions of the UNP. What is surprising today is that a government led by the Sri Lanka Freedom Party has thought it fit to follow the Jayewardene Constitution and the Standing Orders passed during the Jayewardene administration, rather than amend Standing Orders or bring in legislation to provide for an inquiry of a judicial nature as envisaged by the Constitution Bill of 2000, a Bill presented by a Government led by the SLFP.

Democracy demands that Governments respect judicial decisions unpalatable to them. During the People’s Alliance administration led by me, several judgments went against the Government. Prominent amongst them were the cases in which the Courts struck down the dissolution of the Sabaragamuwa and North-Central Provincial Councils; the nomination of persons from outside the nomination papers to fill vacancies in Provincial Councils; the proposed agreement for the exploration and mining of phosphate in Eppawala and so on. When the Supreme Court held against the Government in the Katunayake Airport Taxi Drivers’ Case, on the basis of a statement made in Parliament by Minister Jeyaraj Fernandopulle among other facts, the judges were not impeached for allegedly breaching Parliamentary privilege. Rather, a petition for the review of the judgment was filed in keeping with accepted legal practice. The Supreme Court refused to review its decision. Indeed the most glaring example of the Courts holding against the Government is the Supreme Court judgment of August 2005, cutting short the Presidential term from 06 to 05 years. This judgment was even more surprising, in the circumstances that the Chief Justice himself previously gave advice to the President that she could “take the presidential oath any number of times – even every day, as long as she took oaths at the end of her first presidential term – at the end of 06 years in November 2000”. That President did not move to impeach the said Chief Justice, despite enormous pressure from her Ministers and legal advice that the judgment was incorrect and could be contested before a full bench of the Supreme Court.

Many judicial appointments made in our history have led to controversies and my administration was not spared in that regard. A judge may or may not perform to the expectations of the appointing authority or of the People. But judicial decisions need to be respected by all, especially the government. Dr Colvin R De Silva, one of Sri Lanka’s most eminent lawyers, once stated “There have been bad judges, there will be bad judges but there are no bad judges”. Such is the spirit in which unpalatable judgments need to be received.

It took several millennia for humans to decide that democracy and democratic governance were the most suitable institutions to guarantee individual freedoms and a properly functioning, humane government. Democratic governance requires that there exist assemblies elected by all the citizens to represent all citizens, such as Parliament, regional and local assemblies. It also necessitates the existence of a corpus of laws which will govern the actions of governments and the rulers, the public and so on. This in turn requires that there exists an institution to judge and monitor that the government operates according to the laws of the land. That institution has grown through the ages, to be the Judiciary, which evidently must function independently of those they judge – the government, all its instruments and of course the citizens.

The concept of Separation of Powers, guarantees that the 3 branches of a State – Parliament and other elected bodies, the Executive and the Judiciary have the power and the ability to function freely and independently of each other’s undue influence. The concept of Separation of Powers has proved to be a most essential cornerstone of Democratic governance.

A government that believes that the judiciary must act according to its will and whims, bodes serious danger to democracy and people’s freedoms.

It is necessary that all parliamentarians, especially those of the government and of the Sri Lanka Freedom Party in particular, do not view the issues that have arisen from the perspective of narrow personal political gain. The move to impeach and remove the Chief Justice must be denounced by all who cherish democracy and stand for the independence of the judiciary. It is our duty to protect the judiciary for, by protecting the judiciary, we protect ourselves and our fundamental freedoms.
IS