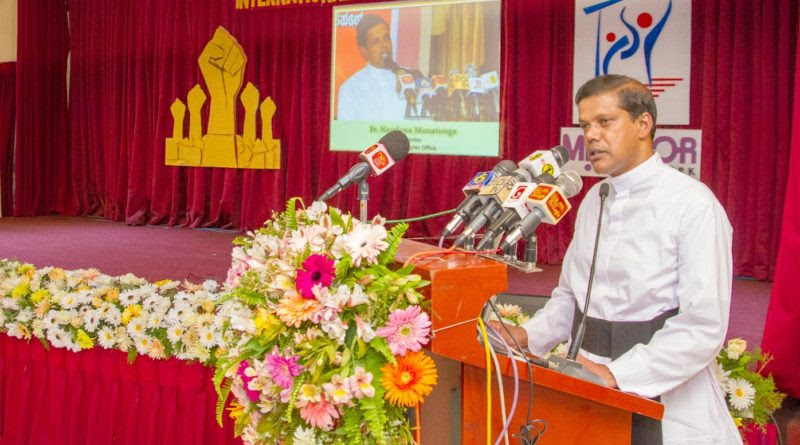 So reads the educational background of Father Nandana Manatunga – winner of the 2018 Gwangju Prize for Human Rights. This award is an annual dedication to the people’s spirit of the May 18 Democratization Movement hosted by the May 18 Memorial Foundation.

As I was waiting for Manatunga’s response , I was sitting on a bench with a cup of coffee in front of the Yongbong-gwan building at Chonnam National University. This was where the student protest started that led to the Gwangju Uprising in 1980. As a human rights activist myself, I am curious about how others got started in the same relentless fight against social injustice. For Manatunga, the impetus was seeing his compatriots being tortured, burnt, and killed on the roadside and thrown into the river.

It was during the second year of his priesthood in Sri Lanka that the Janatha Vimukthi Peramuna (JVP) Youth Insurrection – also known as the 1989 Revolt – hit its climax. It was organized by the left-wing nationalist Sinhalese JVP against the Sri Lankan government under President J. R. Jayewardene. Occurring from 1988 to 1989, the unfortunate incidents resulted in over 60,000 deaths, including many who did not have any connection with the JVP. Many people “disappeared” or were killed by security forces and paramilitary groups who operated under the authorization of the government.

Fr Nandana decided to do something about it. He visited several police stations and army camps to get some of the youth released and provide security for those who were being searched for by the security forces. Fr Nandana recounts the incident that changed his life: “Once when I was traveling alone in my van, a man stopped me, got into my vehicle, and asked me to speed up. The stranger then got off at the bus stop and only then revealed that he had been taken to the cemetery to be shot, but he managed to escape.” And thus commenced Fr Nandana’s career as a human rights defender. With his brother and sister being lawyers, he had a already a legal background as well. 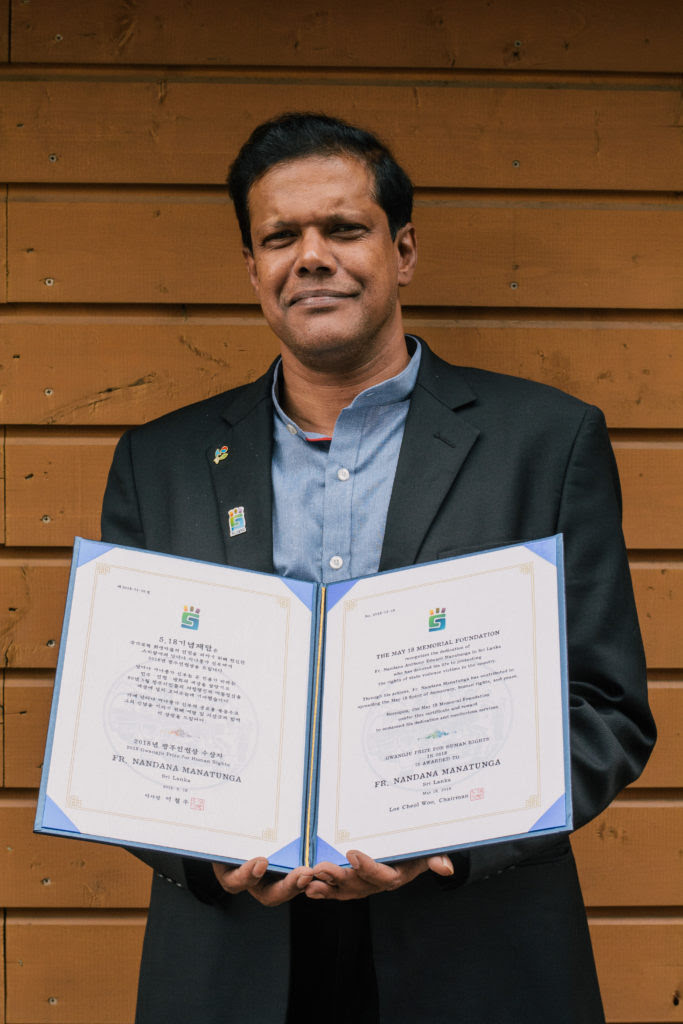 Sri Lanka has left this dark past behind, but corruption still cripples the system, making it impossible to establish sound law enforcement units. This, coupled with widespread public apathy, has given rise to numerous cases of human rights abuses, particularly in the form of rape and torture. A rape occurs every five and a half hours in Sri Lanka, according to police statistics. The wrongdoers often beat the rap or get away with mild sentences. The fact that rape and torture are perceived as commonplace and that a culture of victim-blaming exists only rubs salt in the wound.

Fortunately, the situation is improving, according to Manatunga. “Because of the recent incidents of cruel, inhuman acts of rape and murder, people have changed their perception and are condemning crimes to the extent that civil society has campaigned to implement capital punishment for criminals of rape and murder,” he said.

The work Fr Nandana has put forward is not to be overlooked. His holistic three-body approach, called “Victim-Centered Activity,” involves providing security for young abuse victims to restore their sanity and lives. It also includes surrounding victims with assistance from a professional support group (including counselors, doctors, lawyers, and foster parents), and using Fr Nsndana’s post as a religious leader along with the media to transform public attitudes. His organization, Human Rights Office Kandy, is not the only one that provides legal assistance to victims in Sri Lanka, but his organization’s holistic assistance is still unique. As a result, Fr Nandana’s model has had a profound impact on countless victims of rape and torture, and has revolutionized the landscape of human rights work in other countries.

Not only are former victims witnesses of institutional injustice – they can also be agents of change. Fr Nandana told me about the stories of two such people. The first was a young man named Vivodan, who was arrested as a suspect under the Prevention of Terrorism Act (PTA) in the north of Sri Lanka. He was severely tortured by the police but was later released after his persuasive negotiations. But Vivodan’s battle did not stop there – his brother was arrested, too. “Since [Vivodan] got his freedom, he has joined us and exerted ferocious efforts to free not only his brother, but also other political prisoners and all torture and rape victims in all our campaigns,” Fr Nandana said.

The other victim who later became an agent of change was a police officer named Anton Perera, who was arrested on fabricated charges and ended up being tortured and imprisoned. Fr Nandana’s team managed to free Perera, provide him with counseling, and restore his dignity. Perera is now an activist who supports other victims of torture by accompanying them to court. Unfortunately, his activism has also rendered him a target of law enforcement agencies. “[Perera] was followed by police officers when he accompanied a torture victim to an outstation high court, but he managed to escape,” Manatunga said.

Working as a human rights defender is like dicing with death – one has got to batten down the hatches. “In 2008, one of our victims was shot dead and our task was found to have become even more difficult with the PTA,” Fr Nandana said. “After the civil war, the police have all the powers to label any person as a terrorist and make them disappear.”

Providing protection and security to torture victims is the biggest challenge that he and his team have faced. As the perpetrators invariably happen to be running from law enforcing units, protecting the victims is a difficult task. As daunting as it is, their will withers not.

“Despite notes of warning, we accompany the victims of torture and continue to do so until the perpetrators are convicted in court,” Manatunga said. “Most cases have been going on for 12 to 15 years.” The very first cases in which Manatunga’s team provided shelter, security, medical care, counseling, and education were in 2001. The high court case was finally concluded in December 2015. He emphasized the enormous sacrifice the victims had to bear to seek justice while the perpetrators lived free and happy lives.

Regarding his view on the future of human rights in Sri Lanka, Fr Nandana is convinced that problems will persist if the leaders in his country carry on entertaining impunity and corruption.

“As long as we have a defective justice system, justice is going to be delivered with impunity and rife with loopholes,” Manatunga said. “The perpetrators of crime and corruption will rule the country, and human rights issues will remain.”

The future looks rather bleak, and the need for a strong, charismatic leader who stands for truth, justice, and integrity is urgent. Fortunately, the city of Gwangju has now recognized Fr Nandana as one such leader.

The 2018 Gwangju Prize for Human Rights, presented to Father Nandana Manatunga by The May 18 Memorial Foundation.
As the laureate of the 2018 Gwangju Prize for Human Rights, Fr Nandana dedicated the award to all the victims, survivors, members of support groups, and human rights defenders whom he has worked with. He hopes that the award will inspire many other activists, as well as religious leaders, to defend and protect the rights of the people, even if it means taking on unforeseen risks.

Fr Nandana is an astoundingly qualified academic, a revered Father, and a courageous hero who commits to building a harmonious society in his country and inspires humanity. He does not speak to us from an ivory tower, but rather keeps it real, confronting the predicaments in the trenches by supporting thousands of victims of torture and rape, and by educating myriad human rights activists.

We can all learn something from him. I know I did, as I was sipping his lessons into my consciousness while taking in the aura of the place where history began and human rights triumphed.

(The Author : Sen Nguyen is a graduate student and a vigorous reader, whether it is a book or people. She comes from Hanoi, Vietnam, but her home is wherever her heart is.)