Defacement of Tiruchelvam Peace Mural Must be Viewed with Great Seriousness 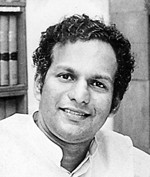 by Dharisha Bastians
“…we cannot glorify death whether in the battlefield or otherwise, we must celebrate life, and we are fiercely committed to protecting and securing the sanctity of life which is the most fundamental value without which all other rights and freedoms become meaningless…” – Dr. Neelan Tiruchelvam – Parliament of Sri Lanka 15 June 1999
Dr. Neelan Tiruchelvam’s words, in an impassioned speech against the death penalty, inspired the brightly coloured peace mural at the Kynsey Road and Kynsey Terrace Junction in Colombo 08.


Overcome with shock and grief at the brutal slaying of the erudite Tamil legislator on July 29, 1999, friends, family and well-wishers gathered at the site of his assassination and under the direction of veteran artist, Chandraguptha Thenuwara, helped to paint doves, flowers, olive branches and the words Secure Sanctity of Life, in Sinhala, Tamil and English on the asphalt.

Every year since on the anniversary of Tiruchelvam’s slaying, the mural has been touched up, its colours restored to its original vibrancy, with authorization from the Cinnamon Gardens Police. As suicide bombings by the LTTE claimed more and more lives in the capital Colombo, it became tradition for civil society to paint messages of peace and healing at the explosion sites. Most of these have been tarred over through the years, with the Neelan mural alone, standing the test of time. 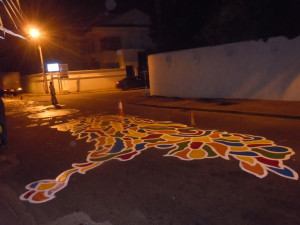 Fast forward to August 2012. The narrative is well known by now. Over three successive days, groups of persons arrived once night had fallen, and not bothering to be discreet, proceeded to pour black oil like liquid and sand over the mural. The mission having failed on the first try, with the mural still being clearly visible the next morning, albeit its colours muted, the groups returned twice more, this time placing traffic cones around the painting before pouring tar over it.

Eye witnesses have reported that there were two vehicles parked nearby, a white truck that had the sign ‘Road Markings’ across its windscreen, and a military white jeep allegedly with two military personnel in uniform seated inside.

After the third attempt to obscure the mural, in which large industrial lights were allegedly used to illuminate the area, the Neelan mural has been almost entirely obliterated, with only the Sinhala translation of the phrase, Secure the Sanctity of Life now visible on Kynsey Road.

Undoubtedly, there will be cynics who subscribe to the ‘what has a painting on the road have to do with peace and reconciliation’ theory. In light of certain other acts of intolerance witnessed in the recent past, this seems a minor, easily fixable infraction by a petty group of persons, in no way representative of the majority perception of Dr. Tiruchelvam or his contribution to Sri Lankan politics.

Two things however, require us to view the defacement of the Tiruchelvam peace mural with great seriousness.
Firstly, the successive attempts to deface the memorial, before large groups of eye-witnesses, utilizing traffic cones that can only be obtained from the law enforcement or the municipality denotes that the act was perpetrated with a significant degree of impunity and perhaps, dare we say it, patronage. It also remains a mystery why there has been no reaction by the government to the incident, even by way of a customary promise to launch an investigation.

The second is one of even graver concern.

The Tiruchelvam mural may have been born of an outpouring of shock and sorrow. Its creators sought to make it an anti-dote to the brutality and violence that had taken the life of yet another Lankan statesman. It was, its creators hoped, a marker of a shared and tragic history. The mural was intended to keep memory alive, about a statesman hailing from the Tamil community and a man whose contribution had been acknowledged by the nation at large.

But in the end, it was a picture painted on a road, whose meaning few knew or understood. So the question must be asked, as to how profoundly intolerance of the other has pervaded the system, if this painting to honour a slain Tamil politician just had to be obliterated.

The mural had after all been in existence for some 13 years. Why was it so critical that it ceases to be in this particular point in time? Perhaps the answer lies in the fact that memory is a powerful, poignant thing.
Seen as a traitor to the Tamil separatist cause, Neelan Tiruchelvam was assassinated by the terrorist group that was waging war against the state, another victim in a long list of eminent Tamil politicians that refused to believe violence and brutality best served the cause of the Tamil people.

Today (aug 12)marks the seventh death anniversary of yet another learned Tamil statesman, also gunned down by the LTTE, Lakshman Kadirgamar, the finest Foreign Minister Sri Lanka has ever produced.

As far as the Tigers were concerned, Tamil moderate intellectuals of the calibre of Kadirgamar and Tiruchelvam posed an equal or graver threat, as did Gotabhaya Rajapaksa or Sarath Fonseka. For separatism to prosper as an ideology, the Kadirgamars and Tiruchelvams had to be neutralized, for they refused to believe that Eelam was the way to have Tamil grievances addressed.

They persisted in seeing the LTTE for the wayward renegades they were, with scant respect for human rights; even the rights of the Tamils they claimed to represent. For going against the grain and choosing a moderate path, Tiruchelvam, like Kadirgamar, six years later, paid the ultimate price. They are the unsung heroes of the Tamil struggle, men of learning that believed a person could be both Tamil and Sri Lankan at the same time, and retain dignity and identity nonetheless.

It is deeply ironic that the same moderates espousing values of pluralism and tolerance that once posed such a threat to the LTTE’s extremism continue to be an irritant to unnamed extremist forces alive today.
But the fact remains that in a growing culture of intolerance and the perpetuation of bigoted, belligerent worldviews, it becomes impossible to acknowledge the heroism of Tamils such as Neelan Tiruchelvam. If the present day discourse holds true, then ‘to the victor go the spoils’, and Tamil heroes have little place in Sri Lanka’s post-conflict history.

In such an ethos, memory can be a dangerous thing – even when it is evoked through an innocuous, multi-hued painting on a city road.