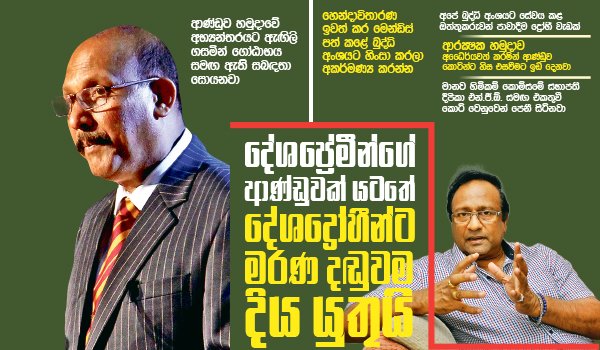 (1 July, 2018/SO)vFormer Military officers such as retired Rear Admiral Sarath Weerasekara who cannot recover from thinking in terms of a military rule are problematic to society, according to Civil society activist and Convernor of the Purawesi Balaya organisation, Gamini Viyangoda.

Expressing his views regarding the recent controversial remarks made by Weerasekara claiming that all traitors should be sentenced to death under the rule of a patriotic government and his verbal attack on the Commissioner of the Human Rights Council of Sri Lanka Dr Deepika Udagama in particular, he says while such attitudes perhaps during a time of war cannot be faulted but they are not acceptable in a modern day democracy. It must be noted that the individual he supports for the future leadership of the country also has a similar mindset Viyangoda said.

Stressing on the severity of the statement, Viyangoda says it can be construed as a death threat against those Weerasekara see as traitors.

“Even in a dispute issuing death threats is taken as a serious criminal offence,” he said, adding that therefore issuing a death threat to a group of individuals after labeling them as traitors should be looked at with utmost severity. In a press conference held on Wednesday former Rear Admiral Sarath Weerasekara called for traitors who work against the nation to be put to death while going on to slam Dr Udagama claiming she is actively working to prevent officers of the Armed forces being deployed for UN peacekeeping missions.

However, refuting allegations that the statements were meant as a death threat, Sarath Weerasekara says he did not mean he would personally undertake such action.

“What I meant was in any court of law around the world treason proved beyond any reasonable doubt is punishable by death,” he said adding that those who are acting against the country should be tried before a valid court of law and be punished accordingly.