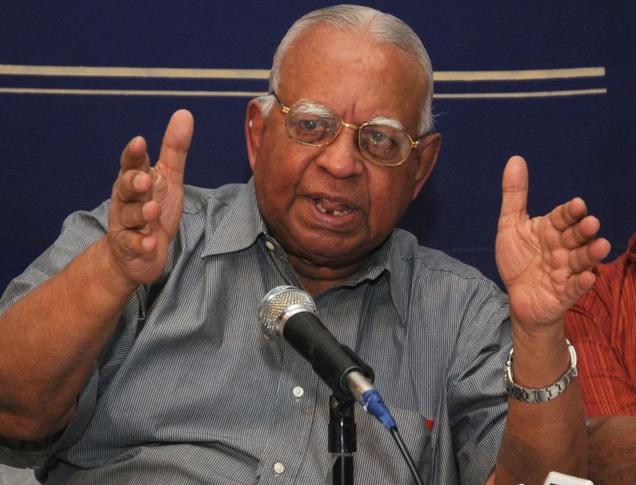 Seran Senguttuvan
The 13th Amendment to the Sri Lankan Constitution came by largely as a result of the Indo Lanka Agreement (1987) after substantial and careful study by legal and other experts of both countries.  The Agreement came at a time when the JR Jayawardena Government was under extreme pressure simultaneously from the JVP in the South and the LTTE in the North  – both having launched island-wide attacks on State utilities as well as the Police and the armed forces. It is reported in a crucial meeting called by President Jayawardena – in the presence of most of the senior Cabinet Ministers the President asked the 4 chiefs of the forces individually if they can hold the government’s writ in the event of attacks both by the JVP and the LTTE.
As the Forces chiefs answered in the negative,  Jayawardena had obtained the sanction of his Cabinet (1) to call in the IPKF to use both their substantial personnel and material resources to disarm the LTTE within a specified period  (2) to concentrate using available Forces personnel in the South to confront the JVP insurrection, which, by that time had succeeded in its mis-information that the JRJ Govt was in the process of handing over the country to India.

It may be recalled from 1971 the JVP had structured their programme, including the initial 5 lessons of Rohana Wijeweera,  on an anti-Indian platform. But, in fact, they aimed at the local Tamil population – both indigenous and of recent Indian origin (Estate Tamils) to create anarchy in the country. It was this hatred that was used, in a large measure, to provide the venom for the attack on Tamils and their properties in Colombo and the rest of the country in the pre-planned pogrom against them in July 1983. JVP cadres are known to have created much of the mayhem.  It is note-worthy many Indian-owned businesses were also destroyed during this period – although the Sindhi, Gujerati and Memon industrialists, who lost millions then, had nothing to do with the Separatist Agenda – then successfully used to poison Sinhala minds.

While the reality is JR Jayawardena used his considerable political experience and skills to get the better of the younger Indian PM Shri Rajiv Gandhi to Sri Lanka’s advantage to disarm LTTE  using Indian soldiers and material resources,  the JVP and Sinhala extremists – both lay and cleric – conspired here to project to the Sinhala mind  the Indian Govt used coercion on the JRJ Govt to sign the Indo-Lanka Agreement. That mind-set has fertile soil in the semi-educated and confused Sinhala mind in a generation that is now over a quarter century old.  The impression then and now in India, among political leaders, historians and academic circles is that India walked into a JRJ laid trap – from which it never regained fully.  This is probably why when V.P. Singh took over as PM one of his first acts was to recall the IPKF.

The object of the I-L Accord was to help the alienated Tamils in the North Eastern Province (then 2 Provinces)  via the instrument of the 13th Amendment to enable them to secure minimum rights in running their own affairs. Both PM’s and their teams were of the view the Separate State option should be discouraged at all costs.  Clearly, Prabakaran and the LTTE were against this line of thought because by then Prabakaran had embarked on his “Eelam or bust” course. There is reason to believe he would have been content with local rule by the Tamils in the North and East, without prejudice to other minorities within, if  Mrs Bandaranaike’s or JRJ’s governments had wisely gone on a path to be accommodative to the Tamils. But both failed in that they considered the Tamil struggle as insignificant and, they erre in the belief this could otherwise be addressed by their numerically superior armed forces.  This is surely why both refused to yield to the peaceful political agitation of the Tamil people between 1970 to the mid-1980s. This is not to mention the racially-inclined and anti-Indian political forces within both governments which did its share in driving the Tamils to the extra-Parliamentary route.

The Governments of JRJ, Premadasa and CBK could not ignore the potent threat of the Buddhist hierarchy – under the influence of the considerably powerful Sinhala extremist wing –  to ignore concessions to Tamils in the NEP. Therefore, the benefits of the 13th Amendment did not go to where it was originally intended. Instead – costly, ineffective, duplicatory and corrupt Provincial Councils came into effect in all 7 Provinces and remain there. Arguably, they are totally unpopular with the people in general. As to the Tamils, Prabakaran and the LTTE have to accept the blame because they did not allow the PCs to take root in the NEP. The merging of the 2 Provinces into a singleNorth Eastern Province was aimed initially to address the two main burning issues of  the Tamil Nation viz:- State-aided Colonisation and the engineered demographic change of the ethnic ratio.  These have been going on in full force from 1956.

It needs to be mentioned here the issue was further complicated by the emergence of an important judicial officer around year 2000 – who hardly concealed his ultimate aim of getting into Party politics.  This is unprecedented becausen all his illustrious predecessors shunned the thought of politics and went into graceful retirement. The Sinhala extremist fringe was to jump at the opportunity. They made certain the man was properly used by the Sinhala supremacists to commit the sacrilege of violating a solemn Protocol entered into between the Governments of both India and Sri Lanka. India cannot be a silent witness to this deliberate act of  truancy. The post-2000 (year) period saw rapid increase in State-aided Colonisation where the once majority community in the Eastern Province, the Tamils, are now rendered to virtually the 3rd position.So much so,  in the recently concluded PC Elections,  for the first time in the history of post-Independent Sri Lanka,  Tamils no longer are in the majority in the EP – a grotesque aberration that needs to be addressed soon.

The story does not end there.  It is clear the Rajapakse government is under pressure to allow PC Elections in the North. Not that they want to. But India and the international community have given them sufficient notice to get their act together. While he allows Elections hither and thither Rajapakse finds flimsy excuses to allow the Tamil people to run their own affairs in the North. With the UN/Geneve staring him at the face come November 2012,  he is forced to yield to the Northern PC Elections by late 2013. He knows the Tamils of the North will reject him soundly – in spite of the intimidating and omnipresent armed forces – working hand in glove with his band of “rejected” Tamil  political goon squads and killer outfits.  Such a rejection, the extremist and Sinhala supremacist groupings close to him will tell him, can increase the chances of the Tamil NEP seeking (and perhaps succeeding soon) the status of a Separate Nation. The example of South Sudan and Bandermoro is there for all to see.

The Sinhala extremists have, therefore, geared themselves not to take the chance of a NP PC gamble.

The powerful Defence Secretary Gothabaya Rajapakse –  a government servant and who should remain loudly silent on political matters –  has fired the first salvo in calling for the repeat of the 13th Amendment. Lapdog Weerawansa is carrying the baton, predictably. The ever obliging JHU is doing its bit  –  with that man said to be a lawyer,  Gammanpila, calling also repeating Gothabaya’s call abrogation. Gammanpila’s clearly lacks  understanding  how global diplomacy moves in matters of violation of protocols between sovreign States.

Whatever mask Mahinda Rajapakse wears here, it is unmistakeable he is behind every one of these infantile moves.

When this question was posed to TNA’s Sampanthan by the local media last week, he chose his words carefully  and  exclaimed “there will be consequences to pay”  The Indian Govt – the other party to the Accord  – is unlikely to allow its nose to be rubbed in public by what it privately considers a recalcitrant neighbour. Certainly not when a crucial General Election is round the corner in India. In the interest of all, it is best President Rajapakse review his options with a group of trusted senior academics, analysts and policy-makers. In the political column of a respected and savvy Sunday English newspaper the subject is given much credence and described as “Indo-Lankan diplomatic ties are tense and have reached the lowest levels in years”  This is certainly not a compliment to President Rajapakse’s diplomatic acumen.    These are careful words that should not be ignored.