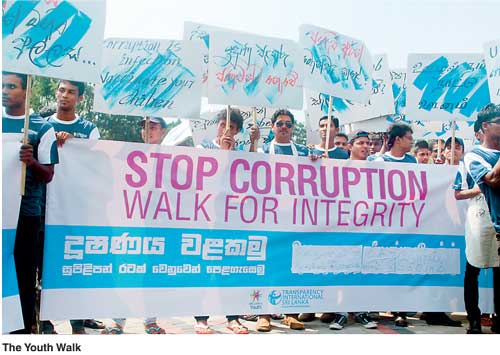 Bipartisan group of ministers make proposals to Cabinet to expedite probe on corruption and fraud cases.

A formidable section of the Cabinet of Ministers have favoured the establishment of Criminal Justice Commissions (CJCs) to punish those responsible for “frauds, corruption and misuse of funds.”A Joint Cabinet Memorandum handed in by them missed the agenda for Tuesday’s weekly ministerial meeting but was listed as a supplement together with different other items. It was, however, not taken up for discussion since the meeting on Unduwap Poya day had extended beyond noon. President Sirisena was to assure that it would be discussed at the next meeting.

That has enabled the prime mover, Dr Sarath Amunugama, Minister of Special Assignments, to seek endorsements from more ministers. At the time of hand over on December 11 (Sunday), besides Amunugama, 14 ministers had placed their signatures on the Joint Cabinet Memorandum. These ministers, who have been assured support by more colleagues, opine that the CJCs should try those accused after the findings of investigative agencies like the Criminal Investigations Department (CID), the Financial Crimes Investigations Division (FCID) and the Special Crimes Investigation Unit (SCIU) which functions under the Police Chief are completed.

One of the SLFP ministers, a signatory, who spoke on grounds of anonymity, said they expected even the bond scam in the Central Bank of Sri Lanka (CBSL), to be placed before the CJC. This is on the grounds that there would be inordinate delays if indictments, if any, were made in courts. He said President Maithripala Sirisena has assured them (the SLFP Ministers) that he would institute a judicial mechanism no sooner Parliament debates the report of the Committee on Public Enterprises (COPE) which probed the bond issue. One or two days from January 24 to 27 are to be allotted for the debate where there will be no vote when it concludes. The Joint Opposition is demanding two days.

Then Prime Minister Sirimavo Bandaranaike’s Government introduced in Parliament the Criminal Justice Commission Act (No: 14 of 1972). Originally, it was the brainchild of the then Attorney General Victor Tennekoon. It was for the purpose of dealing with members of the Janatha Vimukthi Peramuna (JVP) for the abortive April 1971 insurgency. The law then empowered the Chief Justice to name a bench of judges to try the accused and provisions were included to override the provisions of the Evidence Ordinance. Then Chief Justice H.N.G. Fernando named a five judge bench which he chaired. Hundreds of JVPers were arraigned before courts in batches. Most were pardoned whilst some were handed down suspended sentences. Only some top rung leaders were imprisoned. University students were thus able to return to their studies and a number of youth to their previous employment. Justice Fernando noted during sessions that though there were provisions to overlook the Evidence Ordinance, the Commission was not going to do so.

The functioning of this CJC 1 was to inspire the then CID Director Tyrrel Goonetilleke. He lobbied Premier Bandaranaike, her senior ministers and officials to set up a CJC 2 to try those involved in exchange control offences. By then, the CID had launched investigations into a number of cases where there were violations of exchange control laws. Thus, a CJC 2, despite objections from some senior officials, came into being. Mubarak Thaha, who ran a string of night clubs including Atlanta and Tropicana was convicted. Also convicted was bookie owner A.R.M. Mukthar. They were politically associated with the UNP at the time.

Most Sri Lankans, getting impatient over what they see as undue delays in the probes on big corruption rackets, regularly carry out demonstrations such as this. Pic courtesy Daily Mirror

Some features of the CJC were arguably controversial. For instance, the burden of proof was placed on the accused. The Act says, “Any finding made, or sentence imposed by a Commission under this Act shall be final and conclusive, and shall not be called in question in any court or tribunal, whether by way of action, application in revision, appeal, writ or otherwise.”

The CJC Act now remains repealed. This was after the enforcement of the law led to heavy pressure being brought on Premier Bandaranaike. She directed that a Criminal Justice Commissions (Repeal) Law be introduced in 1977. Hence, setting up of new CJCs will necessitate the introduction of a new Bill in Parliament, which ministers say, could incorporate more new provisions. Such provisions, they argue, should include deterrent clauses to prevent bribery and corruption from becoming a hobby of some politicians whatever political side they may belong to.

Here is the full text of the 19-point Joint Cabinet Memorandum titled “Tribunal to Inquire into Corruption” signed so far by 15 members, or a third of the Cabinet of Ministers:

“1. There is now a widespread public desire that corruption be investigated and sanctions imposed on those found guilty expeditiously and in a transparent manner compliant with the principles of natural justice. Corruption per se could lead to the infraction of the criminal law and also the contravention of commercial and civil law.

“2. As such, it is imperative that a Tribunal that can deal with both these aspects be contemplated. Presently none exist within the legal framework. For instance, breaches of the criminal law are tried in a regular Court which is beset with delay. The same delay exists within the framework of the civil and administrative law.

“3. The following options arise for consideration:

“5. However, in dealing with the above offences the said Commissions had wide powers ranging from inquiring into the matter to imposing sanctions on those found guilty (Sections 2, 5 and 15).

“6. Section 2 (2) (b) / (c) empowered the CJC to inquire and determine whether any person is guilty of such offences and to deal with the persons so found guilty or not guilty in the manner prescribed by this Act.

“7. In terms of Section 15 the CJC shall make a finding that he is guilty of such offence and shall sentence him to any punishment, other than death, to which he might have been sentenced if he had been tried and convicted by the Supreme Court.

“8. Moreover, these commissions also had the power to cause the arrest of any person whose custody was necessary during the pendency of the inquiry (Section 14).

“9. The CJC Act was limited in duration to eight years unless extended by Parliament (vide Section 28). However, this Act was repealed in 1977 by the Criminal Justice Commissions (Repeal) Law (No. 12 of 1977) Act.

“11. By contrast an SPCI duly established has very limited power in comparison with the CJC having regard to the powers vested in the CJC to impose sanctions after a finding of guilt.

“12. Presidential commissions only have the power to inquire into and report upon such administration conduct or matter (Section 2).

“13. An SPCI is not empowered to impose sanctions.

“14. These commissions can only recommend the imposition of civic disabilities which is imposed by Parliament (Section 9).

“16. As such, an SPCI cannot impose punishment per se which has to be after due trial by a separate Court of law. It is precisely this two tier approach which is the principal shortcoming of the SPCI.

“17. Therefore, it is apparent that the model under the CJC Act together with reforms serves the public interest of having a legally established Tribunal to deal with corruption rather than having a Special Presidential Commissions of Inquiry.

“18. This is because such a Tribunal could be empowered with a wider range of powers including the power to impose sanctions. Thereby, it saves resources (time and money), for an SPCI only has the power to inquire into, determine and report on matters. This necessitates the subsequent initiation of separate legal proceedings in a court of law to hear and determine if offences have been committed and thereafter impose appropriate sanctions. This will inevitably lead to protracted legal proceedings and inevitable delay which is inimical to the national and public interest.

“19. In order to make this model more beneficial, the jurisdiction of the proposed Tribunal and scope of the matters which falls within the jurisdiction of these Tribunals need to be expanded to include inquiry into breaches of civil and commercial law obligations and provision of appropriate relief including imposition of monetary damages, recovery of illegal proceeds and restitution and compensation.”

In the light of the bi-partisan character the Joint Cabinet Memorandum has assumed since both SLFP and UNP ministers have signed it, and with more due to sign, highly placed Government sources believe, it would receive the approval of the Cabinet of Ministers. These sources said fresh legislation would follow thereafter. Whether provision will then be made to include violators of exchange control laws is not immediately clear.

Bring money back to Sri Lanka
This, as our front page story today reveals, is in the wake of Finance Minister Ravi Karunanayake’s new plans to allow those holding funds in foreign banks, earned through ‘legitimate’ means, to bring them to Sri Lanka. However, he said, such a concession under proposed liberalised exchange control laws will not apply to those who have stacked moneys in foreign bank accounts and have been made through questionable means. They cover not only those held in Swiss Bank accounts but also in other safe havens by Sri Lankans after they had set up offshore companies in Panama. Details of the local account holders from a wealth of data exclusively made available to the Sunday Times from America’s International Consortium of Investigative Journalists (ICIJ) and Germany’s Suddeutsche Zeitung on offshore accounts set up with the help of Mossack Fonseka, a Panamanian firm, appear in a box story on this page.

The latest proposals by the group of ministers for a judicial mechanism to probe “frauds, corruption and misuse of funds” come during a twin phase. On the one hand, several cases of frauds, corruption and instances where public funds have been embezzled are still being probed. On the other, questions are being raised on some of the mega deals now being awarded by the Government prompting accusations of corruption within the new administration. The Joint Opposition has raised issue over some of these matters, particularly the Hambantota Port Project and the granting of 15,000 acres of land to a Chinese company for an industrial estate. The company in question plans to install its own power generating system to remain self-sufficient in electricity instead of depending on Sri Lanka’s national grid.