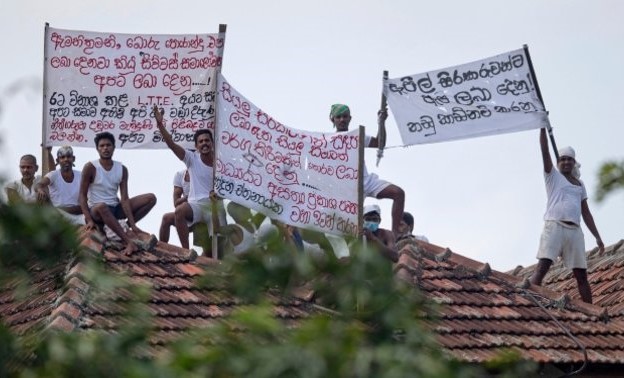 Issuing a letter addressed to local and international organisations Committee for the Protection of Prisoners Rights (CPPR) says that they fear that more repressive measures are imminent against the prisoners who have been demanding that their death sentences to be commuted to life imprisonment. These prisoners are protesting from a rooftop more than a month now.

For a long time, prisoners in Sri Lanka have been demanding to commute their death sentence to life imprisonment and reduce life imprisonment, through the 4-year review provided for in the prison ordinance. This has not been implemented in a transparent, systematic and independent manner. Prisoners have also been agitated due to arbitrary nature of pardons such as to former MP of the ruling party, who was pardoned in less than 5 years after being sentenced to death, while others have been languishing for much longer.

Due to such reasons, prisoners in various prisons have launched protests several times, including last year and this year. They have held discussions with Ministers, including the former State Minister of Prison Management and Prisoners Rehabilitation who had promised to take some action on the commutation of death sentences to life sentence and reduce life sentences by May this year, but this has not happened. Last month, some prisoners again launched a protest atop a rooftop at the Welikada prison which has been going on for more than a month now.

They had held discussions the Minister of Justice, but for more than a month, there has been no adequate responses from the government. Understandably, unrest has been growing and it’s reaching a climax now. Yesterday (23 rd October), a large number of prison officials had been brought to evacuate the protesting inmates and harass their
supporters. Since morning of 23 rd October, prison inmates involved in the protest are not given food and water.

Prisoners and our organization fear that more repressive measures are imminent.

Last year, protesting prisoners in Sri Lanka have been shot, beaten and tortured by prison officials. Information reaching us from prisons indicates there’s great fear of disproportionate use of violence by the government and a bloodbath may occur again in Welikada prison.

In this context, we urge you to urgently and immediately intervene to ensure the lives of prisoners will be safe guarded and there will be no reprisals against prisoners who are protesting and others supporting them. In the longer term, we urge you to ensure the legitimate long-term problems faced by prisoners (which they have been highlighting through protests) will be addressed through a time bound and transparent plan monitored by your organizations, rather than empty promises that are aimed at stopping the protests.