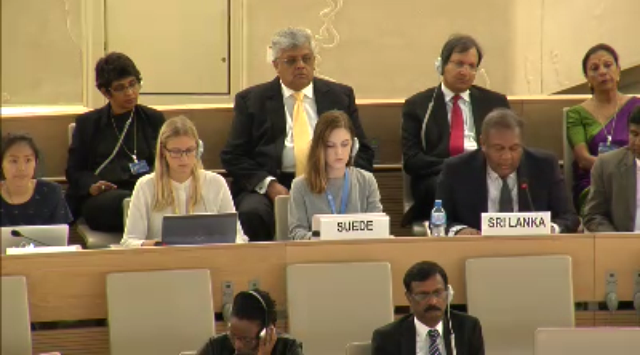 ( Sri Lanka Delegation to the HRC 32)

A number of countries voiced their support for the High Commissioner’s oral update today and re-asserted their commitment to ensuring full implementation of Resolution 30/1. While welcoming the positive steps taken by the Sri Lankan government, several countries expressed concern with ongoing human rights violations and the pace of progress.

The need for international participation.

Many countries specifically reiterated the necessity of international participation in a judicial mechanism as per the Resolution.

“International participation in the accountability mechanism will…be important in ensuring that the process is both credible and perceived as such by all sides in line with the October commitments,” said the Netherlands on behalf of the European Union.

In addition to pointing to the need for international judges, prosecutors, defence lawyers and investigators in a judicial mechanism, Estonia once again called on the Sri Lankan government to ratify the Rome Statute of the International Criminal Court.

“It is further our expectation that Sri Lanka adheres to OP 6 in the resolution, regarding the planned judicial mechanism to investigate allegations of violations and abuses of human rights and violations of international humanitarian law, and of the importance of participation in the judicial mechanism of Commonwealth and other foreign judges, defence lawyers and authorized prosecutors and investigators.”

Macedonia also stated the importance of international participation in the form iterated by the Resolution, as did Ireland.

Canada reiterated that international involvement in a judicial mechanism was importance to “enhance its credibility, especially to victims.”

The need for tangible steps on human rights violations

The United States encouraged Sri Lanka to make continued tangible steps in fulfilling their commitments under the Resolution.

“Protecting human rights in this post-conflict context is central, and we urge Sri Lanka to work to further improve the human rights situation, especially in the North and East,” said Denmark.

Ghana for example, noted that it remained concern about issues regarding the release of lands and detainees, the Prevention of Terrorism Act, a failure to address witness and victim protection laws, and continued allegations of arbitrary arrests, torture/sexual violence and military surveillance. Ghana then called on the UN to remain engaged in Sri Lanka and continue providing assistance.

Estonia called on the Sri Lankan government to take “substantive steps” to address sexual violence and other abuses against women and children, violence against LGBT groups, disappearances and arbitrary detention under the Prevention of Terrorism Act.

Switzerland also noted that the Sri Lankan government had failed to take certain immediate steps such as the full return of land and addressing the witness protection act.

Germany called on the Sri Lankan government once again to repeal the PTA.

Need to increase pace of progress

New Zealand noted the need to move quickly on reconciliation and devolution especially for Tamil communities in the North-East.

The Republic of Korea also pointed to speed and encouraged Sri Lanka not to lose momentum and to cooperate with the UN mechanisms.

“We are fully aware that the processes of accountability and reconciliation require time, but the existing opportunity should not be prolonged indefinitely,” said Macedonia.

Members of the Council also pointed to national consultations as an important indicator for Sri Lanka’s progress, with Japan stating they would be paying very close attention to them.

“All initiatives for reconciliation, accountability and human rights in Sri Lanka should continue to be based on inclusive consultations with victims, civil society and the general population,” said Norway.

Ultimately, countries repeatedly stated the need for a comprehensive and coordinated approach to accountability and justice, and the need for full implementation of the Resolution. As stated by Denmark, though there is increased engagement by Sri Lanka with the UN, there is still much work to be undertaken and the government must show strong leadership to improve the human rights situation in the North-East.