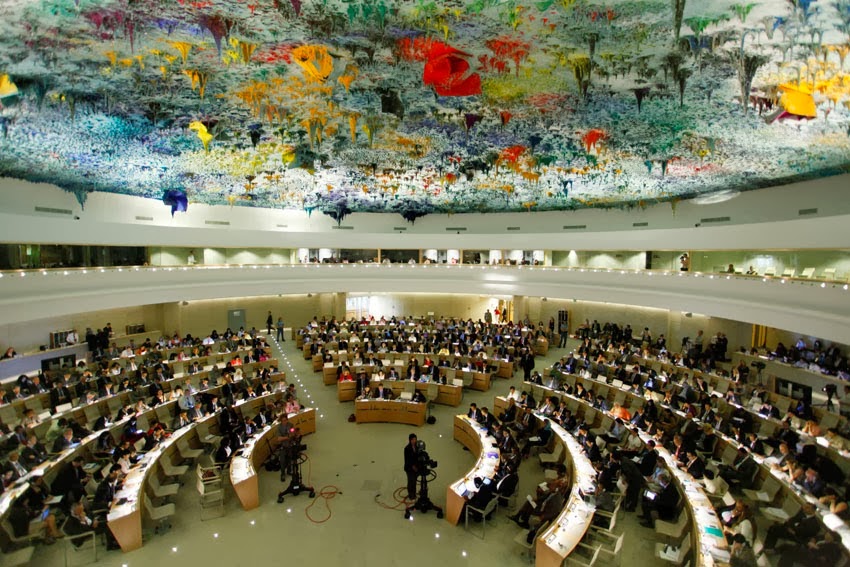 Sri Lankans are more concerned about cost of living and making ends meet than any international issues, was one comment received when the Business Times (BT) sought the views of people on the US-backed resolution against Sri Lanka at this month UN Human ights Council meeting in Geneva
Below is cross section of the comments received in the email poll.
On whether the resolution  would create chaos:
– No one is concerned about the resolution. Why should they be? 60 per cent of our population is worried about how to pay for the next meal or feed their children.
– There will certainly be an immediate reaction from the Government and more particularly the extreme elements.
On any international action:
– The world is not concerned about resolutions against Sri Lanka. This is a lot of hype by the media and people with vested interest in politics and those who oppose the Government.
– Yes … to the extent that in countries where there is strong feeling about human rights standards, which are for the most part some of our largest trading partners, companies with more stringent value based conditions may start enforcing conditions. Having said that there may be a reluctance to create any adverse issues on the masses in the country.
On any foreign policy changes:
– Unlikely. In the past they have been in similar situations. In such cases the Government has been on the offensive.
– No … anyway our current foreign policy is mostly focused towards China and Russia.
General comments:
– The unprofessional handling of issues by incompetent egoistic, short sighted and undiplomatic top team of our leaders will only lead to significant challenges to Sri Lanka, its Executive and citizens.
– Foreign action could lead to a visa and foreign asset ban on all top government leaders, including the Rajapaksa family.
– When we live overseas, we are ashamed – among the other nationalities – the way the country’s affairs are handled by the Sri Lankan authorities. Now it is a joke to say that “I am proud to be a Sri Lankan” in other countries.
– I am a Tamil, born as a Hindu but now more of a Buddhist in my mind and attitude. I am opposed to the Government’s claim and the hidden agenda of trying to make the whole of Sri Lanka as a Sinhala Buddhist country. In the process the Sinhalese have lost their Buddhism. Tamils are a people with equal rights as Sinhalese to their land and their way of life. They have never given it away. Until they regain it the country and the Sinhalese will not have peace.
– External relations as well as internal relations with western powers are poorly handled. Our politicians and bureaucrats still doesn’t realise that 60 % + of our exports go to the EU and the US. They are the most powerful nations not China and India. Even relations with India are not handled diplomatically.
– Surely no man can be a judge in his own case. Government leaders stand accused of war crimes and violations of humanitarian law and cannot judge their own case.
– India has never supported us, always been against us all the time! Remember the ‘parripu’ drop from the air, training of the Tigers, etc. They should abstain if they can’t vote with Sri Lanka. Being our neighbour their behaviour is shocking.
– None of the other countries involved have ‘clean hands’ or are impartial. On the other hand, we need improvement in governance, law and order, reduced corruption, and ethnic and religious harmony, and fair play and this is not for the benefit of the so called ‘international community’ but for our own good. (Comment from Arjuna A.)
– It is clear as daylight that this so-called probe is at the behest of expatriate Tamils.
– It is unbelievable that countries like the US, UK or Canada could honestly say that they have a clean slate on human rights as much as pointing the finger at Sri Lanka.
– The entire approach of the UNHRC stinks, as any sensible person could see very clearly that it is targeted towards the regime and is mooted by the dregs of LTTE who are unable to swallow the bitter pill of defeat on the one side and the loss of revenue to those elements who lived an ostentatious life at the cost of some poor Tamils in Jaffna. On the other hand if the LTTE had wiped out the border villages (before the war ended) would the UNHRC have taken the same stand? Why can’t the Government of Sri Lanka appoint an international investigation consisting of representatives of Australia, China Russia and South Africa to inquire and report on what is required by the UNHRC?

Sri Lanka will be named and shamed but its government will not be bothered by it. It will align itself with friends like China, Russia, Iran, Zimbabwe, etc which also have personal interests in supporting Sri Lanka. The losers will be the citizens of Sri Lanka who will have to suffer from a violation of their rights, for another period the length of which no one is really sure.
– All the Government had to do was put in process a serious investigation into what happened towards the end of the war. The international community is not talking about regime change, just accountability. There’s no point in getting on their high horse and saying ‘hands off’, it has not done them any good so far. For healing to even begin, alleged violation of human rights has to be dealt with no matter the circumstances. This is why a mandate is now sought for an international inquiry. My dearest hope and prayer is that this will be for the good of all communities in Sri Lanka.

– The government of Sri Lanka should have experienced career diplomats in all the important countries to counter false propaganda by the hostile Tamil Diaspora.

– This problem should have been handled sensibly under advice from knowledgeable and persons experienced in diplomatic matters.

– No country should interfere in another’s sovereignty. But in this case, the leaders of our country seem to be hiding something which may have taken place during the final stages of the war. Otherwise, why are they refusing an investigation? My personal view is that this resolution must be moved and approved in order to prevent further damage to our country sometime in the future.

If the world’s super-powers want to ruin Sri Lanka, they will enforce any new law to suit their objectives, noted one respondent during a street poll conducted by Colombo-based Research and Consultancy Bureau (RCB) on the Sri Lanka’s prospects at the Geneva UN Human Rights sessions where the country is facing a resolution alleging human rights violations.

Most respondents during this poll were of the view that the international community was unfair towards Sri Lanka. A cross section of the views is given below:

– Some people say that Sri Lanka has not signed the international convention on war crimes. Therefore no legal action could be taken against the country. But Syria which was not a signatory to the convention had to face war crimes charges. If the super powers want to bring down the country then they will introduce new laws to achieve their objective.
– We have no knowledge on human rights.
– There were divergent views on this matter. But we have no correct understanding about the issue.
– This proposal will not be passed at the Geneva sessions. Even if it is passed nothing will happen to Sri Lanka. Nothing has happened to the country even after previous resolution against Sri Lanka.
– Around 60 per cent is in favour of the resolution against Sri Lanka but 40 per cent is on our side.
– If this resolution is passed in Geneva, then there will be more foreign pressure against the country but foreign policies will not be changed.
– The intention of the international community is to prevent Sri Lanka’s economic progress. Therefore their interference would be intensified after the Geneva sessions.
– There were many changes in Sri Lanka after the previous human rights resolution against the country. If those foreign representatives who visited the island to inquire into the present situation in the country after passing this resolution had reported it correctly, then there is no need to pass another resolution.
– No one can understand as to what this government is doing. The president is doing what his brothers are saying.
– If the resolution is passed in Geneva, there would be minor protest demonstrations in the country but there won’t be any big issues.
– We cannot say the activities of the government and the Foreign Ministry have been good or bad. There have been both good moves and bad ones.
– Many recommendations such as the resettlement of the internally displaced, land mine clearing and rehabilitation activities of the displaced made in the report of the Lessons Learnt and Reconciliation Commission have been implemented. Therefore more countries will support Sri Lanka at the upcoming Geneva sessions. The resolution will not be passed at the meeting.
– The number of opponents against the country could increase this time, because of the political stability and the development in the country. But there won’t be any major impact on Sri Lanka.