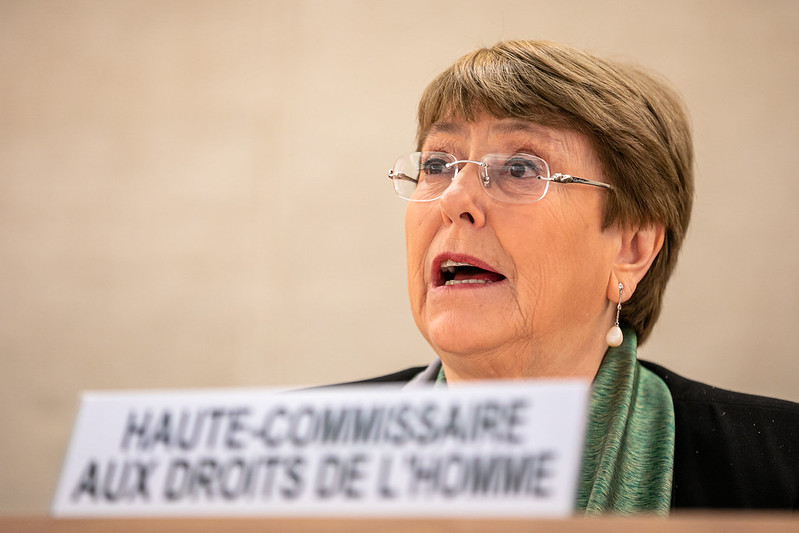 Presenting an oral update on Sri Lanka UN High Commissioner for Human Rights Michelle Bachelet today at the 48th session of UNHRC said that ” the current social, economic and governance challenges faced by Sri Lanka indicate the corrosive impact that militarisation and the lack of accountability continue to have on fundamental rights, civic space, democratic institutions, social cohesion and sustainable development.”

I am pleased to update the Human Rights Council on Sri Lanka and the trends and issues identified in my last report.  I acknowledge the inputs sent by the Government in preparation for this update, and I note the President’s statement in June that the Government is “committed to work with the UN to ensure accountability” and will implement “necessary institutional reforms.” I look forward to seeing concrete actions to this effect – in line with the recommendations that have been made in our reports and by various human rights mechanisms – and my Office stands ready to engage.

I also encourage the swift and public release of the reports of the national Commission of Inquiry that was appointed in January 2021, which I understand will complete its mandate by the end of this year, so that its work and recommendations can be assessed.

The current social, economic and governance challenges faced by Sri Lanka indicate the corrosive impact that militarisation and the lack of accountability continue to have on fundamental rights, civic space, democratic institutions, social cohesion and sustainable development.

A new state of emergency was declared in Sri Lanka on 30 August, with the stated aim of ensuring food security and price controls, amid deepening recession. The emergency regulations are very broad and may further expand the role of the military in civilian functions. The Office will be closely monitoring their application.

I note with interest the President’s recent meeting with some civil society leaders, and I encourage broader dialogue and steps to open Sri Lanka’s civic space.  Regrettably, surveillance, intimidation and judicial harassment of human rights defenders, journalists and families of the disappeared has not only continued, but has broadened to a wider spectrum of students, academics, medical professionals and religious leaders critical of government policies. Several peaceful protests and commemorations have been met with excessive use of force and the arrest or detention of demonstrators in quarantine centres.

New regulations on civil society groups are being drafted, and it is widely feared that they will further tighten restrictions on fundamental freedoms. I urge that the draft be made public to allow the broadest possible discussion.

I am concerned by developments in judicial proceedings in a number of emblematic human rights cases.  They include the Attorney General’s decision not to proceed with charges against former Navy commander Wasantha Karannagoda in the case of the enforced disappearances of 11 men in 2008 and 2009.

Despite various inquiries, the victims of the Easter Sunday bombings in 2019 and religious leaders continue to call urgently for truth and justice, and a full account of the circumstances that permitted those attacks.

The President’s recent pardon of a former member of parliament, Duminda Silva, who was convicted for killing a politician in 2011, also risks eroding confidence in the rule of law and judicial process.

I am deeply concerned about further deaths in police custody, and in the context of police encounters with alleged drug criminal gangs, as well as continuing reports of torture and ill-treatment by law enforcement officials.

In March, new “de-radicalization” regulations were issued that permit arbitrary administrative detention of individuals for up to two years without trial.  I note that the Supreme Court has issued an interim stay order on their enforcement while it considers fundamental rights petitions to challenge the decree. The Government has also prescribed or listed over 300 Tamil and Muslim groups and individuals for alleged links to terrorist groups.

In June, 16 prisoners who had been convicted under the problematic Prevention of Terrorism Act, and who were nearing the end of their sentences, were pardoned. An Advisory Board has been established to which detainees under the Act can apply for their cases to be reviewed, and I urge a speedy resolution to these long-standing cases.

The Government has reaffirmed its intention to revisit the Act and established a Cabinet sub-committee for this purpose. However, I am deeply concerned about the continued use of the Act to arrest and detain people.  Lawyer Hejaaz Hizbullah has now been detained for 16 months under the Act without credible evidence presented before a court. Likewise, Ahnaf Jazeem, a teacher and poet, has been detained without charge since May 2020.  I urge an immediate moratorium on the use of the Act, and that a clear timeline be set for its comprehensive review or repeal.

A National Policy for Reparations was approved in August, and reparation payments and reconciliation programs have continued. The Office of Missing Persons has also continued to operate – with a sixth regional office opened in Kilinochchi – but it needs to inspire confidence among victims.  I stress again the importance of transparent, victim-centred and gender sensitive approaches, and that reparations programs must be accompanied by broader truth and justice measures.

I note also that last month, the Global Alliance of National Human Rights Institutions decided to initiate a special review of the national Human Rights Commission to determine its compliance with the Paris Principles, indicating its concerns about the appointment process of the Commission and its effectiveness in discharging its human rights mandate.

Against this backdrop, my Office’s work to implement the accountability-related aspects of Resolution 46/1 has begun, pending recruitment of a start-up team.  We have developed an information and evidence repository with nearly 120,000 individual items already held by the UN, and we will initiate as much information-gathering as possible this year. I urge Member States to ensure the budget process provides the necessary support so that my Office can fully implement this work.

I encourage Council members to continue paying close attention to developments in Sri Lanka, and to seek credible progress in advancing reconciliation, accountability and human rights.