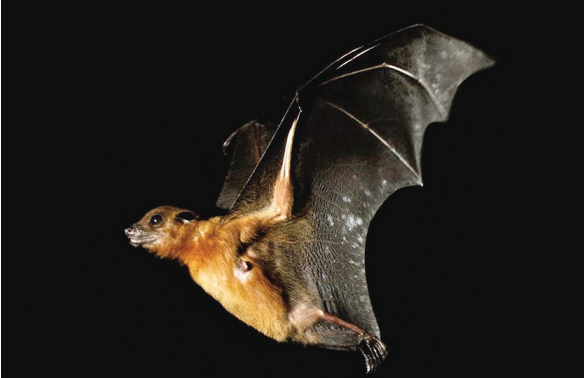 Bats are an important reservoir of viruses. They can fly long distances and have sociable roosting habits, increasing the chances of virus transmission to other species. There have been several recent outbreaks of viruses in humans, such as Ebola, Marburg, Nipah, and the most recent coronavirus outbreak causing the coronavirus disease 2019 (COVID-19) pandemic. Understanding how bats and viruses have co-evolved may help develop strategies for containing or mitigating such outbreaks.

Coronaviruses can be subdivided into four categories, alpha, beta, gamma, and delta coronaviruses. The alpha and beta coronaviruses have been detected in bats, which may be their natural reservoir, and also in other animals such as donkeys and pigs.

Asian countries have a large number of bat species. In Sri Lanka, about 30 different bat species can be found and these populations likely harbor alpha and beta coronaviruses.

Researchers recently studied bats in one of the largest natural caves in Sri Lanka, Wavul Galge cave, which is home to five different bat species. They found evidence for the presence of alpha and beta coronaviruses in these bats and reported their results recently in the journal Vaccines.

The team collected samples from bats belonging to the genera Miniopterus, Rousettus, Rhinolophus, or Hipposideros in March and July 2018, and January 2019. They collected oral swabs and rectal swabs or feces, extracted RNA from them, transcribed them into cDNA, and screened for coronaviruses using a polymerase chain reaction assay. The positive PCR products were sequenced, the sequences were analyzed, and aligned with known coronavirus reference strains.

From a total of 255 rectal swabs and 141 fecal samples, 33 samples tested positive for coronaviruses. Sequencing revealed at least 384 most frequently occurring nucleotides at the same position, or a consensus sequence. For the M. fuliginosus sample, four were 100% identical, while others had a difference in at least one nucleotide, with the identities ranging between 65% to 99%. The two positive samples from R. leschenaultii share about 56–63% of the nucleotide sequences with M. fuliginosus.

The team found 31 alpha coronaviruses in M. fuliginosus bats. There is a great variety in the nucleotide sequences obtained from these bats. The researchers used the highly conserved RdRP for their analysis. Although this gene is important for viral replication and less susceptible to mutation, coronaviruses have a fast mutation rate, likely causing the high diversity of this gene.

The analysis also indicated the presence of different alpha coronaviruses within the species. They also found the HKU8 and HKU7 and other related coronaviruses in these bats, suggesting bats of this species probably are hosts for these coronaviruses.

Variety of alpha- and beta-coronaviruses

The M. fuliginosus bats were a focus of the study because of their migration behavior. They migrate from colonies near the Wavul Galge cave between July and August. The presence of bats from different regions may explain the variation in the viruses. More studies will be needed to understand if there is any transmission or exchange of viruses when the bats migrate to the cave.

Although the team also sampled species of Rhinolophus and Hipposideros, they did not find any samples that tested positive for coronaviruses. This could be because the number of bats sampled of these species were low or there is a seasonality in these animals shedding viruses.

Although the different species of bats roost together in the cave, the viruses seem to be specific to the hosts. They detected alpha coronaviruses only in M. fuliginosus, although Hipposideros are also known to carry these viruses. This suggests transmission of viruses did not occur between the species.

Using a risk analysis tool for ranking virus spillover to humans, the researchers evaluated the risk of spillover of the viruses from M. fuliginosus and R. leschenaultii. For R. leschenaultii, they checked the beta coronavirus HKU9, which has a high ranking score and is listed at 14 in the risk ranking of 887 viruses. For the M. fuliginosus species, the ranking of the closest related alpha coronavirus was 40.

Although bat species hosting different coronaviruses are present in the cave, there is little evidence of virus transmission. This suggests spillovers only occur because of human intrusion into the areas where bats live. Monitoring bats could help us better understand and prevent zoonotic transmission.

by By Lakshmi Supriya, PhD.Jun 22 2021Reviewed by Emily Henderson, B.Sc.